Do you have an Overactive Guilt Thyroid? Why it’s time to lose the misplaced sense of obligation over birthday greetings to exes, text replies etc 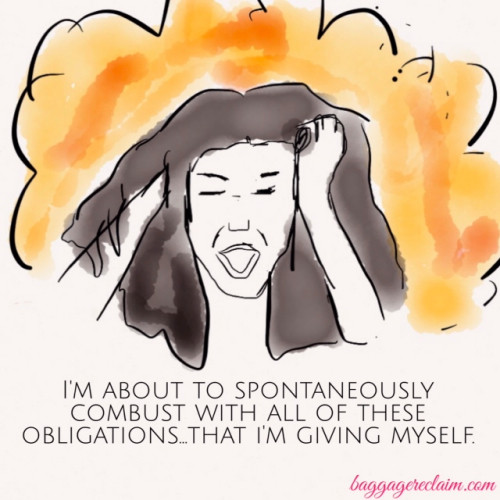 When I hear stories from readers regarding their angst about whether or not to do something, it becomes clear that when we tie ourselves up in knots over stuff like whether to send a birthday greeting to an ex, whether to agree to a favour, whether to reply to a text, or even whether a person is entitled to expect whatever it is that they’re expecting from us, we have a misplaced sense of obligation and feel indebted.

When we have what I sometimes refer to as an Overactive Guilt Thyroid condition, we make ourselves feel obliged and indebted with ‘rules’ that aren’t really rules. We may be predisposed to associate these situations that stress us out with us having committed some wrongdoing or with us not looking a certain way if we don’t comply, hence we feel obliged to do stuff that inwardly, we may be screaming, ‘No, no, no! I beg you, don’t put me though this!’

Of course sometimes we forget what the true meaning of an obligation is about and if we remembered, we might actually laugh at what we stress ourselves out over.

Do birthday greetings create a debt? Do you note each person who wished you happy birthday on Facebook and then hunt them down on their birthdays so that you can repay the debt of gratitude? Is that thoughtful or stressful? Shouldn’t wishing somebody a happy birthday be a simple no strings act that you do just because you want to not because you feel as if the sky is going to fall down and that you’re going to judged? Of course you forget that it’s you that’s judging you because it’s you who gets to decide what is and isn’t okay for you.

We also have to rein in our egos: Is that person’s world going to fall apart if we don’t send that greeting (or meeting other so-called ‘obligations’? It’s too much to expect that the greeting means that much because all we’re doing is setting ourselves up for a fall because we’ll build it up and they won’t live up to our expectations. It doesn’t mean it doesn’t mean anything but it doesn’t mean all of the drama that we’re attributing to it.

If it’s going to cost you your peace of mind to wish someone a happy birthday or you’re going to inadvertently believe that they’re indebted to you in some way (for instance, expecting that they’ll change or validate you), don’t bother. It’s just a birthday. It’s the same for Christmas / The Holidays and other occasions.

You can show thanks for a card (or message) but it doesn’t create a debt that’s repayable with reciprocation either in the form of matching it or even overdoing it with attention, ego stroking, sex, getting back together or wiping the slate clean. It was just a card. If it came from an authentic place with no agenda, you have no reason to feel indebted and they would certainly not expect to avail themselves of your [dodgy] form of repayment.

You’re not obliged to do favours or even to meet people’s requests. People can and will ask but it doesn’t mean that you have to say yes as if, ‘I was asked and so it’s ordained that I must do it.’ Even if somebody has done something for you before, it doesn’t mean that the specific thing that you’re looking to do is an obligation. If you can do it and it’s not an issue to do so and you’re not expecting something back that you haven’t directly communicated, knock yourself out.

It’s just a text and not every text requires a reply. Some people stress themselves out and feel bound to give an immediate reply as if there’s a texting code of practice that demands that they reply swiftly and favourably to shady folk who purposefully choose texting to avoid proper effort and direct communication.

An expectation is a strong belief that something is going to happen but that expectation may be unrealistic and if you comply even when you don’t want to, you’re actually communicating that the expectation was correct, which will only lead to pain.

Be careful of correlating that sense of obligation that you may automatically feel when you perceive someone to have an expectation or request of you, with there being an actual obligation or expectation in existence, when your imagination and ‘worry fish’ may be doing overtime.

If you have an Overactive Guilt Thyroid, when you examine where this obligation and debt of gratitude comes from, you will find a sense of inadequacy. You’re likely an Over-Giver, so each time somebody does something, you feel as if you have to ramp up the effort, or you generally act as if you have to do so much more than everyone else in order to create a tipping point of reciprocation.

As a grown-up, I’ve learned that I can appreciate my parents but I’m not obliged to do everything that they ask or expect of me as a means of paying a debt for coming out of my mother’s hoo-hah or for ‘inconveniencing’ them by being a child or for just being part of their family. It doesn’t mean that I don’t appreciate my parents but I don’t feel obliged to keep throwing them my self-esteem as part payment. I also don’t want to operate from a position of fear and helplessness because I’ll end up behaving and thinking like a child.

It is good to practice gratitude because you are showing an appreciation for your life, who you are, and also recognising where people do acts of kindness or life’s blessings in disguise. If you’re tying yourself up in knots and feeling indebted when you really don’t need to, it’s a misappropriation of your energy, not least because you may be feeling indebted where there isn’t genuine kindness or having a disproportionate response.

You may also be breaking your obligations to you in the pursuit of false obligations with others. Don’t tie yourself up in rules that aren’t rules because you will spend your life going against yourself in an effort to conform to hot air.

As a general rule of thumb I’ve learned that when it comes to stuff that basically involves giving and doing something for someone, if there’s an excessive amount of brain and emotional expenditure going out on the decision of whether or not to do it, it’s a sign that we either shouldn’t, or that the reason why we’re thinking about giving or doing whatever it is doesn’t come from an authentic, healthy place. We have concerns and feelings that we may be ignoring and/or we have expectations tied to what we’re about to give or do that we may not even be in full acknowledgement about to ourselves.

Kindness should be reciprocated with appreciation not obligation because you feeling obligated immediately changes what was originally a kind act or gesture into something laced with pain.

Podcast Ep. 57: Why Did We Break Up?--Save You, Save Me
Podcast Ep. 75: #Relationshipgoals, The Common Denominator, Wanting Love Is OK
Podcast Ep. 174: Let's Not Be Okay With Taking Advantage of Someone