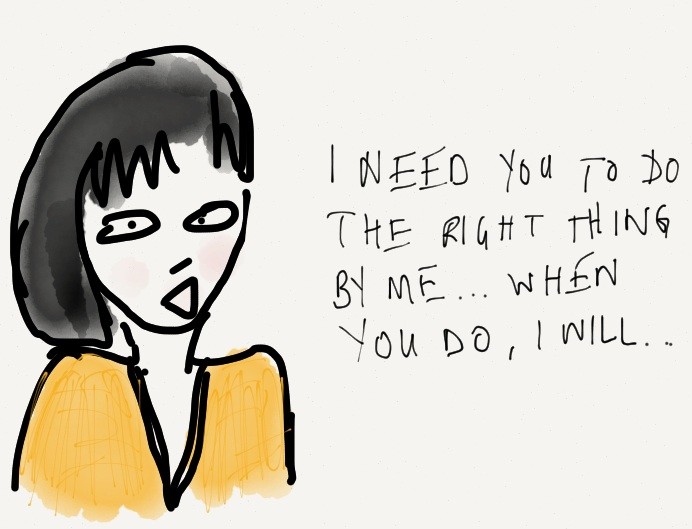 I know from personal experience that one can get blinded in the pursuit of trying to get somebody to do the right thing, the ‘right thing’ being the opposite to whatever they’re currently being and doing.
We get blinded because in trying to get somebody to do the right thing, we put doing the right thing by us on pause or just chuck it out the window.
We get blinded because our idea of the right thing may be entirely different to their idea of the right thing. We may see a little or a lot that’s wrong with what they’re doing but they might not.
Admittedly our idea of the right thing may be based on him/her doing what we believe is the right thing for us which may conflict with what they believe is the right thing for them.
They may know that what they’ve done isn’t ‘right’ per se but at the same time they may not believe that ‘repayment’ should take the form that you desire.
Sometimes the right thing is the right thing full stop and other times, it’s subjective. It seems like the right thing to us but if we were to get it, it may very well turn out to be the wrong thing and if we persist in pursuing our view of things, we get blinded to the bigger picture including why our version of things isn’t happening.
Often we believe it’s right because it’s the picture that we had in our head. It’s how we saw things unfolding and working out and even if part of our expectations are based on what another person promised and claimed to intend, ultimately we may feel that we’re owed the right version of events because we don’t want to accept the truth of the situation and the disappointment that comes with it.
Sometimes the right thing isn’t the right thing but we don’t and may not know that until much further down the line when we look back and think, Jaysus! I dodged a bullet on that one!
I remember thinking that the right thing for my ex to do was to leave his girlfriend. In my mind, I’d been and done so many things in an effort to please him and secure his love, that the least he could have done was broken it off with her. It burned me that my huge efforts to please him in the form of having the affair on his terms and be willing to bankrupt me in the process, they weren’t enough. He would not do the right thing. Even the whole, ‘I’m seriously ill’ wasn’t a trigger.
They say that the things that piss you off in others shine a light on where you may be guilty of the same thing. I wanted him to do the right thing because I was averse to stepping up for me and stepping away from him. I wanted to be right instead of admitting that I’d misjudged the situation. In the end it was me that had to be brave. At one point I’d thought we’d be brave together but he would have left me hanging. It’d be like planning to dive out of a plane together and him insisting that of course he’d be right there with me, only for me to look around and find myself alone.
I used to do the whole ‘After everything I’ve done for you…’ and yada yada yada and the thing is, I see it now with the benefit of hindsight. I felt as if everything I did was a show of faith and a contribution to the affair investment fund. He just thought it was who I was. I felt that I was owed what I’d thought that it was all leading to. I mean, what the frick did he think I was doing it for? To entertain him like some pop-up entertainment centre with an armchair psychologist, ego stroking, and sex kitten button, and all just for kicks?
I recognise now that the logical thing to do when you’re cheating is to leave or stop and sort your relationship out but that I was not entitled to him leaving. It wasn’t the ‘right thing’; it was just what I wanted and sometimes we mix the two up when we let our feelings and yes our ego’s, dictate our outlook. It was far from crazy to expect him to leave, not least because he was the one to say that he would plus he would not beat it, but me being willing to have an affair doesn’t entitle me to a straight exchange of him leaving. I wanted the wrong thing to be made right and I did it when I left and stayed left.
Sometimes the way that we see the problem is the problem in that we’re insisting that something is right for us when it hurts like hell and it takes us in the opposite direction to treating ourselves with love, care, trust, and respect. We  doggedly pursue this rightness even though it’s engaging insanity — repeatedly doing the same things and expecting different results and then being surprised when we don’t get them and persisting again.
We can’t make others ‘do the right thing’, especially when they’re resistant to it but if we know what the right thing is, the best thing we can do is to be brave enough to embody it in our own lives. Don’t let pursuit of trying to get somebody to do the right thing, blind you to doing the right thing by you.
Your thoughts?

Guest Post: A Journey in an Honest Conversation from Pain to Self-Love
Just Because You’ve Agreed To Something Previously, It Doesn’t Mean That You ‘Should’ Do So Again
Tips: How to break up with a lovely person