If They Won’t Cosign To The Truth, It Doesn’t Invalidate It 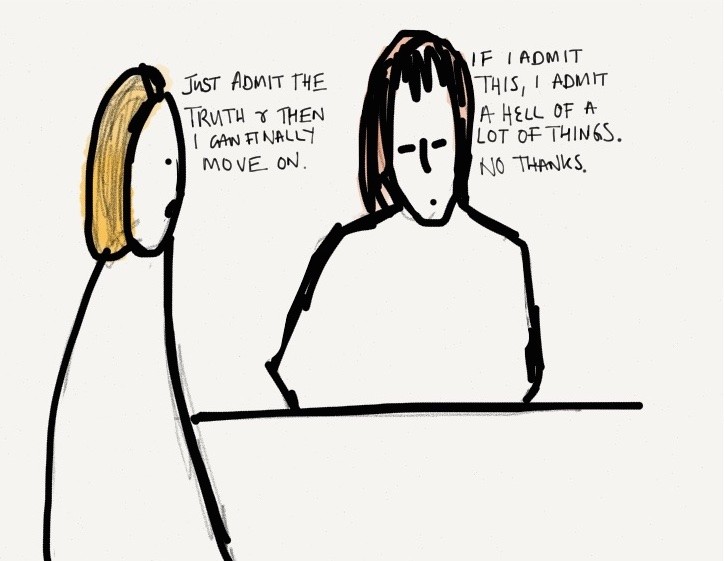 I talk to so many people who feel frustrated by the fact that they see the truth but others don’t or choose not to, because it feels as if the truth isn’t the truth unless everybody agrees to it. It’s as if they’re not allowed to have their own perspective. In reality, our perspective is our own perspective based on our own experiences, outlook, beliefs, values, assumptions, education, fears, experienced etc., and theirs is theirs.

It’s critical to have an authentic relationship with ourselves and to be able to distinguish between ‘image’ versus reality. We don’t need to be BS vigilantes leaving no BS stone unturned. It’s most important for us to know what we know.

A couple of years ago, I attended a funeral. After the service, despite staying in the background, people kept coming over and asking who I was. I told them that he was my mother’s father and then they were falling over themselves to talk about me being his granddaughter and basically rewriting history on the spot. I didn’t feel away about it but I also didn’t need to feed it either so when the many people who expressed surprise at my existence expressed their condolences, I thanked them but also said that I didn’t really know him. Actually, I didn’t know him at all.

The funny thing is that this experience helped me to realise that a lot of the reason why we cosign on to untruths is because 1) we think the truth is “not very nice” and feel guilty or bad about it, and/or 2) to make others more comfortable. What this has the unfortunate side effect of, is shaming us about the truth.

Within families in particular, there can be codes of silence and lies, where a family will clan together and refuse to admit the existence of the truth of certain events. After a while, they believe the lies and in fact, the lies are no longer lies to them because they’re all singing from the same hymn sheet. What happens if we deviate from it? We’re frozen out, ostracised, or even called a liar and shamed, and this in itself can be incentive enough to tow the line.

We can feel as if we’re being penalised for being honest or we struggle to fathom why everyone would want to go along with the lie.

‘But it’s a lie! They know it is! They should want to tell the truth!’

We can’t handle the lie so why can they?

Unless we’re going to play along, we are a threat. If we know that we would not be able to remain silent, we have no choice but to leave them to their devices or step back, because the alternative – riding their arses like Zorro to see things our way – is a painful vocation that’s better left alone. 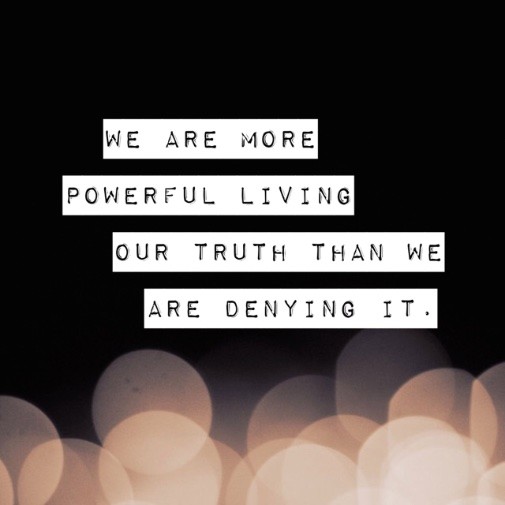 It’s one thing when someone’s receptive to the truth; it’s another when we’re trying to reprogram a group of people so that we can feel OK about what we know. This is especially frustrating when we hold ourselves back from processing our truth and moving our life forward because we’re waiting for their permission. We can handle what we know and work through coming to terms with it whether we gain their agreement or not.

We’re more powerful living our truth than we are denying our truth while we either try to keep the peace in the herd, or we attempt to find yet another way of getting them to see things from our perspective.

Granted, we’ll have the added hurt and grief that comes from their unwillingness to recognise the truth and the loss we experience as a result, but the pain recedes when we stop invalidating our own feelings in response to their behaviour. We grieve, we get more balanced, and we align ourselves with people and opportunities where we can live more honestly without forcing things.

Denial is a very powerful. We can’t make people say something and force them to stand alongside our truth. It would be nice if they did, as it can be a way of showing loyalty and support but if they don’t, it’s not about us; it’s about their own relationship with themselves and the truth and whether they could handle it.

They’re coming from a different level of awareness to us.

It’s a distraction from living if we try to clobber people into seeing things our way. It’s not that these people couldn’t do with making their own changes but there comes a point when we have to ask, Why are we trying to make others change when we could be getting on with the business of living?

We want them to adapt and change their own feelings and behaviour so that we can feel better. We can do that without them. Really.

We want them to side with and validate us as we may decide that we’re “wrong” and a “loser” if they don’t. We forget that some of these people may be too afraid of negative consequences and some of them don’t want to be aware of the truth never mind know it or do anything about it.

When we admit one truth attached to the lie, it can come down like a house of cards. That’s just too much for some people. They’ve developed their coping mechanism and even if they’re unhappy, the uncomfortable comfort zone for them is a more attractive alternative to the unknown.

It’s easy to fall into the trap of personalising things to the degree of telling ourselves that if we were more ________ or less ______, or “the favoured one” or whatever, that they’d cosign to our truth but this is a falsehood. We’re feeding us with the lie that is this idea that we can influence and control their feelings and behaviour by being pleasing but us doing this won’t change whether they want to have that level of awareness, accountability, and responsibility. This ‘pleasing’ can be the source of a great deal of pain if we’ve been The Good Girl or The Good Guy for a long time and suppressed and repressed our true feelings, opinions, needs, expectations, and desires, because on some level we feel that we’ve accrued some credits. When they won’t see things from our perspective or admit the truth and we’ve done all of those things which may include turning a blind eye and not having boundaries, it’s like, After everything I’ve done for you and you can’t even throw me a truth bone? And then we wonder what’s wrong with us. That’s how we draw out feeling bad about what they’ve done because we persecute ourselves with negative self-talk.

We hold ourselves hostage to the situation and we keep looking to them for closure and as a result, we keep the wound open by remaining open to some of the things that they do that cause us pain.

In the end, we come to realise that it is us who is going to have to positively adapt and change our own feelings and behaviour so that we stop trying to influence them and we instead take command of us. We change our response to them so that we stop being reliant on their acknowledgement or agreement and at the same time, remove their power over us.

If they don’t want to say something or take action, that’s their prerogative. We know where we stand and it’s not on the same page. We know that we have to adjust our expectations of this person and do our own work to support our knowledge of the truth. What they can’t do is attempt to hold us hostage to their version of events and expect us to accept less than love, care, trust and respect so that they don’t feel any discomfort.

The truth is the truth even if others choose to see it differently.

Lovenomics: Managing Your Desire to Be the Exception in Relationships Part One
Happy New Year (and of course a few words)
Podcast Ep. 173: It's Time To Talk About Stonewalling