Knowing if things are different ‘this time’ 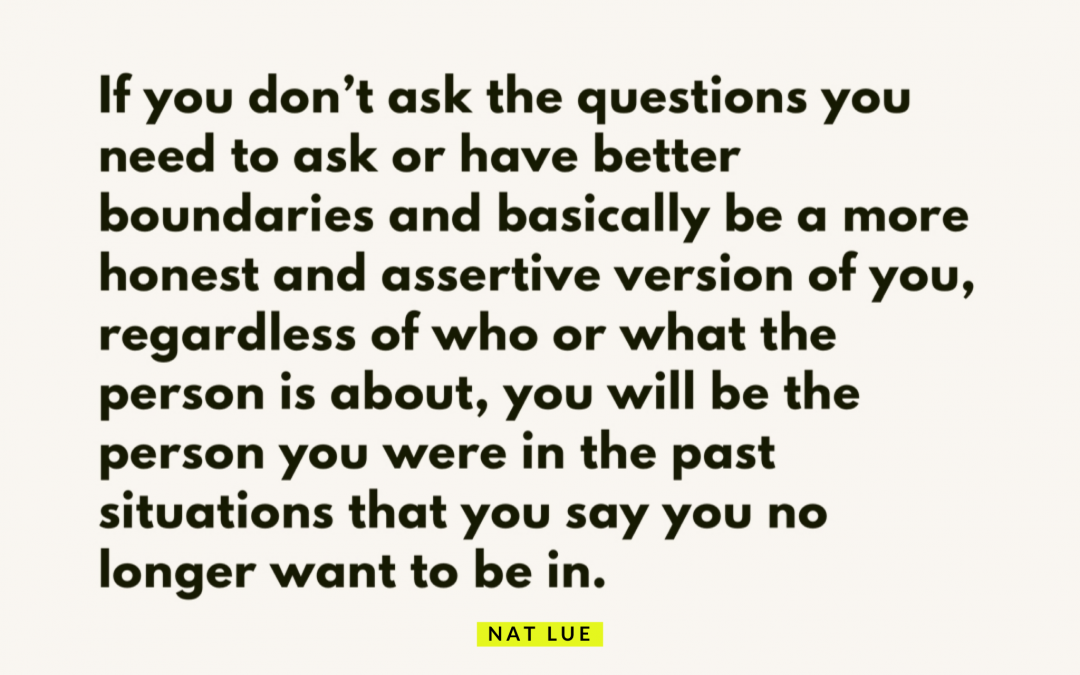 When we feel as if we’ve had a bad run with certain types of people or situation, there can be this anxiety and fear that it’s happening (or going to) when we try again. So, for example, we start dating someone new. Although it seems to be going pretty well, we’re constantly trying to scan the proverbial perimeter to spot signs that they’re not a time-waster or shady, and that we’re headed for a committed relationship.

Dating anxiety is driven by fear that the past is going to happen again, trying to predict the future, sometimes trying to fast-forward us emotionally, mentally and physically, and ‘efforting (or try-ing)’ — being and doing things in an attempt to generate and control the outcome. On some level, we’re wondering, Am I enough [to get what I need/want]? Is this the last time I’m going to have to start over? Can I trust them? Are they going to screw me over? Do they want a relationship? What if they change their mind? Am I going to get hurt?

Because we sometimes don’t trust ourselves or we’re somewhat nervous of boundaries or owning our needs, we start doing the equivalent of playing Columbo or trying to patrol the perimeter to catch the other party out. Or, we keep dropping hints and showcasing our partner potential with people-pleasing. Unfortunately, the efforting, auditioning and sleuthing stresses us out, ramps up our anxiety and sucks the joy out of things. We’re also missing the wood for the trees, and it’s this:

To move on from being in the lather, rinse, repeat of our pattern of past situations, it is us who has to think and act differently.

All-too-often, the focus is on trying to pick up on clues and cues about the other party. We don’t look in the most obvious place: our actions, thinking and feelings. Are we being and doing what we did in previous situations that we’re afraid of being in again?

I speak with clients who feel enamoured with a new dating prospect and want to know if what they think they’re feeling, thinking and experiencing is the green light that this person is The One or that they’re going to ‘get’ a relationship. While getting some intel on the new partner can undoubtedly be useful, I’m more interested in what my client is doing. I’m curious about whether they’re doing what they did in the past.

For example, Are they moving too fast? Are they people-pleasing? Did they do any of the things they’ve previously said they would avoid ‘next time’? Do they talk about this person as if they already know them really well even though it’s been a hot minute? Are they saying that it’s the first time they’re thinking/feeling/doing something in a long time even though it isn’t? Are they being ambiguous, waiting on the other party or letting them direct the pace and temperature of the involvement?

The clue about whether we are in a different type of situation is in our actions, mentality and attitude.

If we are still avoiding asking questions, speaking up, being ourselves or whatever it is, it doesn’t matter if the person is The Best Person Ever TM or a variation of our pattern, we’re still doing what we did before.

To evolve out of past experiences, we need to update our emotional, mental, physical and spiritual boundaries. If we don’t make a shift in the habits of thinking and behaviour that contributed to us being in a past situation, it makes it hard for us to trust us and move forward with confidence. We might regard ‘our part’ as teeny-tiny, but it’s still our responsibility. We are the common denominator who shows up to every act, scene and moment of our life. If we don’t like feeling or being a certain way, we have to compassionately acknowledge what we bring into each situation. No, not blaming and shaming us and owning other people’s feelings and behaviour. It’s humbling ourselves enough to be honest about the thoughts, feelings and behaviours we carry into these situations regardless of the person.

Think about it: How can we know if someone is different to the person we’re afraid of them being if we’re not behaving any differently to how we were with that very person? We’ll know that it and they are different when we are willing to go the emotional and behavioural places we’ve avoided previously. Then, we don’t have to be anxious that it’s happening ‘this time’ or going to ‘next time’ because we’ve allowed us to evolve.

It’s us who needs to let us know that we have our back. If we don’t want to be in those pastsituations again, we need to allow us to evolve our boundaries and sense of self beyond who we were back then.

NML's Quick Thoughts on Self-Esteem and Drama Reduction
100 Tips & Thoughts for Better Self-Esteem - A Guide To Happiness & Improved Sense of Self
Do we really need to forgive?