NO Isn’t A Dirty Word 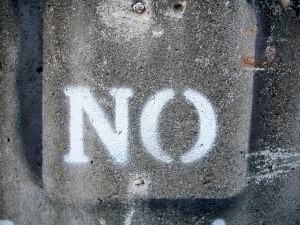 When you’re averse to saying and sticking to NO, you have longstanding negative associations with it and boundaries, which means that when you’re faced with the prospect of having to decline something, it builds into Dynasty levels of drama in your mind.

You imagine them being slammed into the wall by the force of your ‘rejection’. Often, from the moment there’s a hint of NO or conflict, you’re already wounded and unbeknownst to you, have begun adjusting your behaviour to protect yourself or to ward off potential conflict.

You imagine them feeling bad about themselves. This is because you can’t handle hearing NO so you imagine that everyone else can’t either. You make a judgement about you when you hear NO instead of judging the situation.

You imagine people thinking badly of you. You often think badly of people who have said NO even if they had legitimate reasons. You also might associate getting a NO with the assumption that they must think badly of you if they’re saying it – not everything is about you.

You imagine the sky falling in. This is because when you experience NO, this is how you feel.

You worry that if you say NO, that no one else is going to say YES. There can be this assumption that you’re being asked because otherwise no one else can do it. I know it’s nice to think you’re that special, but really, you’d be surprised how many others will say YES to boundary crossing…

You worry that if you say NO, that someone else will say YES, which will then make you wonder if you were wrong for saying NO. Your NO isn’t good enough for you. If someone else would say YES to the same thing, even if it’s the sh*ttest thing you’ve ever been asked to do, you invalidate your boundaries and your judgment.

You worry that you’re being rude even though the other option is being a doormat. This indicates a fundamental problem with having boundaries – you believe that it’s rude to decline something or have limits.

You worry that you’re burning a bridge that’s actually already burnt. This is why so many people are collecting exes and shady friends like dusty medals and junk cluttering up their home – you’re keeping them as a just-in-case-you-might-need them (or they you), or just-in-case-they-decide-to-spontaneously-combust-into-a-better-person-in-a-better-relationship.

You worry that saying NO means that you’re not being helpful or compassionate, or even empathetic, even though saying NO is actually often helpful etc to both parties if you’re prepared to look beyond the short-term. Just look at Hollywood as an example of why hearing YES all the time is incredibly dangerous.

Your brain plays tunes from your Greatest (S)hits Collection in advance of the prospect of saying NO. “You’re a bad, bad person don’t you know?”, “Maybe You Should Have Said Yes But You’ve Effed Things Up Again By Saying NO And Now You Deserve To Be Unhappy”, “You’re So Rude (I Bet You Think This Song Is About You), and other such tracks.

Most of the drama from saying NO or the prospect of it, is in your own mind. NO isn’t a dirty word.

If you have a poor relationship with the word NO, it’s time to nurture the kid inside you that wants to sulk, tantrum, or retreat due to feeling like you’ve had love withdrawn or been judged as being unworthy. It’s also time to recognise that limits aren’t a bad thing. There can be this reluctance to deny yourself or others, even if doing so is actually for the greater good, because you associate limits with being denied things that you want and think you should have. Next thing you’re thinking “I’m not going to deny myself anything like the way my mother/father did when they wouldn’t do X,Y,Z.”

You may have learned that NO creates negative consequences, either in childhood where you’ve become nervous of conflict, criticism (even if it’s constructive), or experienced punishment, or in adulthood where you think you think you lost out on a relationship because you wouldn’t participate in a boundary busting situation. If your boundaries were violated in childhood, you may never have learned that it was OK to say NO because you had basic human rights ripped from you.

However you’ve arrived at this juncture of being afraid of saying and sticking to NO, as a fully-fledged adult, you are entitled to own your right to say NO. Helplessness isn’t going to help you and as many can attest to, saying YES when you really mean NO isn’t going to help either.

If you don’t learn to say NO you will become a prisoner of giving negative YES’s – agreement given, not from a genuine positive place but out of fear and sometime’s or even often, a hidden agenda of trying to bend people to your will by always saying YES with a view to ‘collecting’ at a later date.

NO doesn’t always or even very often mean rejection; it means you want different things.

It means whatever is being proposed doesn’t meet your needs.

It means you may not be able to meet their hopes and expectations and that saying YES would be misleading and create far greater pain than the result of saying NO in the short term.

It means this isn’t good for you right now.

It means that whatever is being proposed doesn’t work for you in that format but that if it had been in a different format, you might have said YES.

It means you don’t want to do something for whatever reason, and you know what? That is your right and you actually don’t have to explain why and justify yourself. Write down a list of everyone you know and ask yourself how many of these people run around justifying why they say NO – it won’t be many, so why are you?

It means that it’s not workable because it would make you uncomfortable and go against your values – it busts your boundaries.

And sometimes it just means NO.

People say NO because of themselves just like people say YES for themselves hence whichever one you choose, do it for you for the right reasons.

Write down a list of people who you’re afraid of saying NO to. Do they say or demonstrate NO to you? Yep! It is amazing how often the very people who have no problem busting up your boundaries, have their own that they have no problem enforcing.

Just like decisions, if you say NO and then don’t stick with it long enough to affirm your right and decision to say NO, you’re never actually saying NO – you’re saying a delayed, flip-flapping, knee-jerking, YES. You’re also teaching people around you that you’re full of hot air which gives them the blueprints to eff you over.

I’ve learned to say/show NO because even though I sometimes get anxious about it, it’s nothing compared to the anxiety and gut wrenching ache caused by avoiding NO. Try to say NO without justification, especially for stuff that would leave you being treated without love, care, trust, and respect. Other people with boundaries would say NO to it, just like others without boundaries would say YES – don’t opt for the path of least resistance.

Experience has taught me that 9/10 times when I experience anxiety about saying NO, it’s unwarranted. The rest of the time I can handle it. So can you. I would never have discovered this if I’d continued to say YES to screwing myself over – I’ve had more pain and anxiety from saying and showing YES than I’ve ever had from saying NO.

Open Your Eyes
Advice Wednesday: I Tried To Rescue Him From His Unfair Open Relationship & He Went Back To Her
Are you faking it? Why you shouldn't waste your time faking orgasms?
Share this...