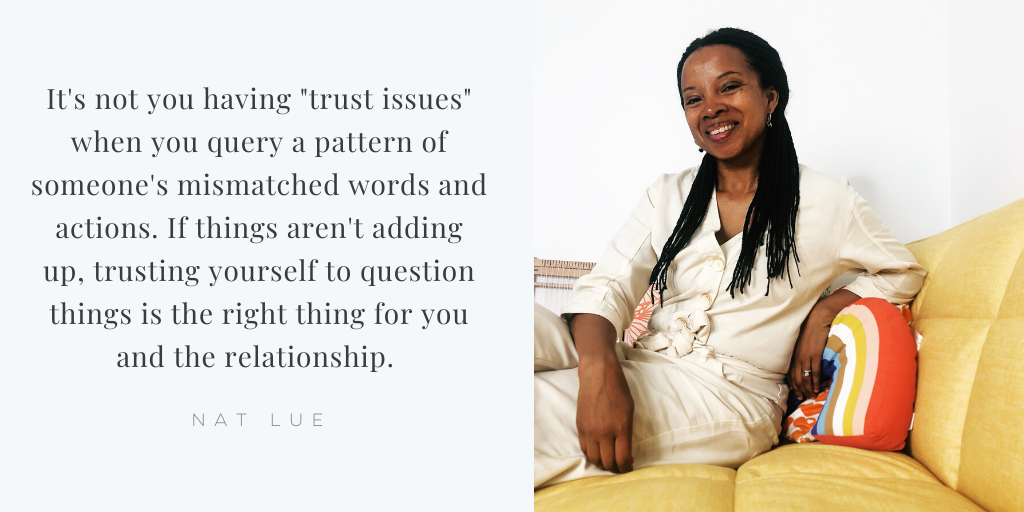 There are times in life when we have trust issues and behave accordingly. Whatever our brand of distrust, when we’re, for example, caught going through their phone or we’re off base with an accusation, or we want to monitor their every move, it becomes clear, even if we’re reluctant to admit it, that we don’t trust this person.

There are times, though, where we take someone at their word that they’re going to do something, and then they don’t follow through. In these instances, we, well, question things. And rightly so. We probably have to work ourselves up to saying something, too. This is especially the case if we’re a people-pleaser. We fear hurting their feelings or appearing impatient, needy, demanding, unsupportive or distrusting.

In these situations where actions don’t match expressed intentions, it’s not unusual to get “Don’t you trust me?” or to be flat-out accused of not trusting them when we query things.

Take my friend, for example. When she first met her boyfriend, she hesitated about being involved with someone who’d been separated for two years. Some of the things he said about his wife suggested that there was drama and that divorce wasn’t imminent. He assured her that he was “handling things”. Not wanting to press about something when it was still early days, she left him to it.

After several months, it became clear that, actually, nothing had changed. He seemed pretty settled into the status quo of tiptoeing around his ex. He’d positioned himself as someone whose marriage had ended, and she couldn’t see how she and her children fit into that. But when she queried his silence and inaction about what was going on, he said that it was about her not trusting him.

A trust issue would be if they were going out, getting along, he was open with her, and she kept saying that he was being shady or that he was going to go running back to his ex. It would be a trust issue if she hadn’t believed him in the first place and waited for him to fail.

It’s not you having “trust issues” when you query a pattern of someone’s mismatched words and actions. If things aren’t adding up, trusting yourself to question things is the right thing for you and the relationship.

If someone even does something once that’s significant enough to call the information you have in your mental file into question or that directly contradicts who they’ve claimed to be or what they’ve said they’ll do, it’s more than okay to query or flag it. It’s necessary.

Asking someone who hasn’t communicated through actions and words what is going on is having the good sense to ask questions. It’s about ensuring that you’re on the same page.

Show me the results.

If you tell me that you’re doing something or that you are something, and I’m not seeing and experiencing it, not because I refuse to but because you’re not showing it, you don’t get to throw the “trust issues” thing at me. And they don’t get to do it to you.

Someone else’s partner kept saying that a deal they’d been working on was going to close “next week”. The problem? It had been “next week” for a few years. Holding out for this one deal was putting a massive strain on their relationship.

The real issue: his partner was asking him to believe in results that didn’t exist and where actions and words were inconsistent. It’s like, “Hello! I’ve just taken you at your word that this deal is coming through ‘next week’ for a few years. Where do you get off accusing me of being distrusting?”

Healthy relationships rely on each partner being able to call the other out on their stuff. Something these situations [of so-called distrust] reveal is our guilt and unease about questioning when things don’t add up.

Sometimes it’s also about our discomfort with being honest with our partner (and ourselves) about where they’re lying to themselves or us.

We’re only going to be lied to, to the extent that we’re willing to lie to ourselves. Things can only be ambiguous if we ourselves avoid clarity and asking the uncomfortable questions.

Situations where we’re told that we have trust issues due to our concerns about actions not matching words, are like the emperor’s new clothes. So now we’re supposed to pretend that the emperor isn’t naked just to preserve the illusion or prop up their ego? Nope!

Of course, these conversations aren’t easy. The moment, though, that we stop being honest with our partner and ourselves about how we feel, is the moment that we block intimacy in the relationship.

It also shouldn’t take us kicking off about the lack of action for someone to follow through. Or appear to be. Granted, us humans do often need a proverbial boot up the backside or the tension of things going wrong to spring into action, but it’s not something we should cultivate in our intimate relationships. If we do, the relationship can’t grow and prosper because it’s imbalanced and inconsistent.

Suddenly, when it became clear that my friend had a limit, he’s talking about how he’s “filing”. A sudden flurry of action or promises of commitment is very common in unavailable relationships. This is where we have to be careful of things returning to the status quo once things have ‘blown over’.

Trust is something we need to avail ourselves of benefits and resources that we couldn’t on our own. It’s a gamble.

We’re gambling that this person values the benefit of building a long-term relationship over screwing us in the short term. We’re also gambling that what we’ve seen so far (or been told) is an expression of who they are and will continue to be. If things aren’t adding up, we have to question it so that our actions and words match our intentions for who we are and where we want to go.

It’s too much for somebody to expect you to distrust yourself just so that they can keep up with an illusion.

Someone who has genuine intentions for the relationship even if they’ve detoured a little will appreciate you being honest and calling them on their BS instead of making out that it’s your trust issues that are the problem.