There is no ‘job opening’; relationships are co-created. 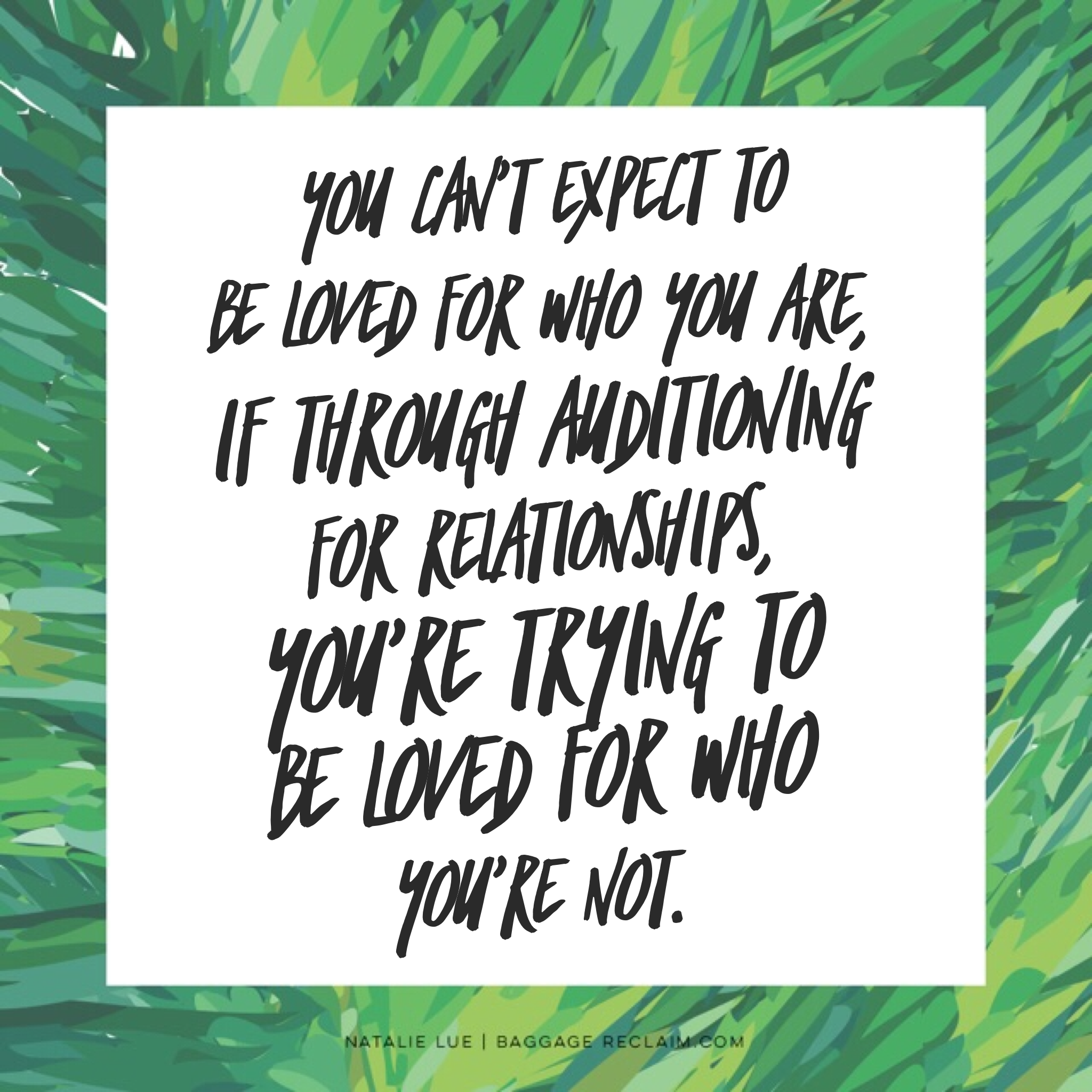 Are you looking for a relationship right now? If so, consider whether you’re coming from an empowered place, or whether you feel inferior in some way and as if this potential future partner, who you might not have met yet, holds the power to determine your future. If it’s the latter, you are falling into the trap of behaving like someone who has to do ‘all the right things’ in order to be chosen. You’re hoping that someone will give you a home.

Auditioning to be chosen for the role of girlfriend/boyfriend or The Ideal Spouse™  causes you to immediately enter into non-mutual agreements, even if that’s purely in terms of your own mentality, attitude and behaviour. The other party might actually be up for a mutually fulfilling relationship, but if you act as if you have to interview and perform to fill the ‘vacancy’ they have, as if you’re a sidekick to the big boss, you will de-prioritise you. Putting them on a pedestal and so deeming them to be superior, automatically creates an imbalanced relationship. It inadvertently places you in a child role, keeping you small and automatically giving them a parental, or certainly, authoritarian role. You will override your intuition and basically give you up by deferring to them.

You can co-create great ones, good ones, so-so ones and sh*t ones, but whichever way you slice it, relationships are co-created.

To assume otherwise is to give automatic authority to anyone who gives you the time of day, sparks interest, or makes noises about the possibility of a relationship.

It says, ‘You know best and are superior. Please give me a job for life so that I can feel safe and secure. I’ll do whatever you like’.

I’ve realised that back in the day, I was a bit like Little Orphan Annie waiting for a Daddy Warbucks to whisk me off to a better life. It’s no wonder then, that despite the fact that I was well past the age of needing adopting, I did carry on, even in my fledgling relationships, as if I had to hold my breath until I could be sure they weren’t going to send me back.

Imagine how this attitude of believing that men had all the power and the keys to my happiness, was impacting my sense of self—it affected my perception of my opportunities, my sense of personal power, my sense of worthiness full stop.

Red flag? What red flag? There’s no such thing as red flags, or as I call them, code amber and red issues, when you’re afraid to bite the hand that’s literally feeding your self-esteem and perceived to hold the keys to your future.

In truth, there is no ready-made relationship that allows you to step into someone’s life playing a role that you already do by default (e.g people pleaser, Florence Nightingale, scapegoat, odd one out)—because, you know that is what treating dating and relationships like a job opening amounts to, don’t you? It’s looking for somewhere that matches how you already feel about and treat you so that you can ‘slot in’, so you’re actually looking to extend a familiar albeit uncomfortable role that isn’t serving your highest good.

Think about it: If you always approach dating and relationships as if the other party has a vacancy that needs filling, you’re basically saying that they set the terms and that they have the best idea of how you should be utilising your time, energy, effort and emotions.

You’re also saying that how you perceive the past, including any negative beliefs about you, are permanent statements of the future that need to be applied to the types of job (read: relationship) that you can apply for.

Auditioning for relationships suggests that they know best about who and what you should be, and that the real you doesn’t matter if at the end of the day, you’re going to get a relationship out of it.

For some reason, you’re inferring that you have no clue, and you know what? They might not have a fricking clue either, but instead of being clueless together and figuring it out with healthy boundaries (we all have to start somewhere after all), they’re now The Grand Poobah of relationships, despite the fact that actually, they might not have the character, values, or experience to justify even one iota of what you’re attributing to them.

If you don’t co-create relationships, you will be a replacement or temporary stand-in and distraction for something from the past.

Which begs the question: Why are you trying to stand in for an ex that it didn’t work out with?

Sure, it might be comfortable, it might be familiar, it might even be easy for him/her to transfer their relationship balance over to you, but it sure as hell isn’t a good idea. It’s dirty debt.

Aside from it being emotionally lazy for someone to treat you like a cardboard cut-out that replaces someone they haven’t gotten over, whether it’s that they’re still angry (could be a parent/caregiver, ex etc) or because they still have unresolved romantic feelings, you’re immediately marginalising you.

If you’re inclined to marginalise you, ask yourself:

There’s nothing wrong with having clarity around your values and what you need and want in a relationship, but someone who doesn’t want to get out of their head and out of their past, is going to:

1) Be emotionally unavailable due to being on autopilot and will
2) Judge you unfairly, whether it’s consciously or not, plus up at the shadier end of things, will blame you for their actions or lack of them in the relationship.

People who are detached from the truth of themselves and their past, love latching on to people who blow smoke up their bottom by extension of the fact that they’re behaving like they’re auditioning for a prize role.

Love care trust and respect is conscious, aware, and present.

You’re also not liking or loving someone if you’re putting them on a pedestal; you’re just setting you up to feel inferior.

Auditioning and acting as if you’re inferior, automatically blocks you from being a loving partner in a loving relationship.

In every relationship, there are two people who have variances because they might be similarly strengthened or similarly flawed, but are also differing in individual strengths and weaknesses. That’s the beauty of not just relationships, but embracing who we really are as people and being OK with bringing that to the table instead of carrying on as if everyone else is perfect [even when it’s quite obvious that they’re not].

It doesn’t matter how much experience you or they have (or don’t have).

You’re allowed to grow and you have just as much to bring to the table as someone who is seemingly more ‘experienced’.

What matters is the relationship and what you do together. It matters how you show up and how you’re each prepared to evolve.

You are either co-creating a loving relationship or you’re in servitude playing it small. Choose wisely.

Why you don't need to ask about exclusivity if the person you're dating is ambiguous or even shady
Relationships need two committed parties to grow and prosper
It's OK to receive - you don't always have to be the giver
Share this...