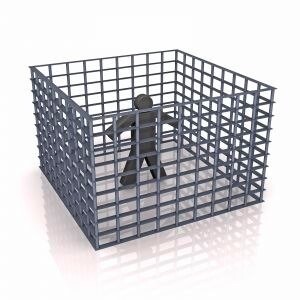 In part one I followed up a recent post about normalising bad behaviour – where you become so departed from what you feel comfortable with, that the uncomfortable becomes the familiar and the comfortable – by explaining about how we can become isolated in our relationships.

This happens either because our desire to be with someone has us sidelining ourselves and forgetting about family, friends, work, passions, or because there can be direct and indirect messages from the other party which we react to try to please them and end up isolating ourselves. The unfortunate effect of this though is that by being with someone who is uncommitted, when we shelve everything around us and isolate ourselves, they aren’t there to support us either.

The key thing that will keep you in a relationship that is having a negative impact on you is fear.

Fear that everything they say about you is true and that they’re as good as it gets.

Fear that every negative thing you think about yourself is true – a self-fulfilling prophecy because in going out with people who reflect your negative beliefs they’re only going to serve to validate the negative, not contradict it.

Fear of being alone.

Fear that you can’t trust your judgement.

Fear that you’ll be nothing without them.

Fear of having to deal with whatever issues you have instead of focusing on them.

Fear that you’ll never find someone who brings out these extreme feelings in you.

Fear of loss and losing.

As I explained in a post last year about drama seeking triggers, you can end up having a relationship with your fear when you are letting your fears determine your experiences.

When I speak to readers and ask what they’re scared of, a number of the things are already happening, they just choose not to look at it that way, or what they imagine to be so awful hasn’t been reconciled with the reality of things.

For instance, often when we’re scared of being alone, it turns out that even when we’re with them we’re alone because they are not in the relationship with us that we want them to be.

Often we’re afraid of what they’ll say or do if we don’t take their phonecall, or we don’t play by their rules and after a while, you have to wonder, if you want out of the pain, isn’t it time to ask yourself what’s the worst that can happen?

If the worst that can happen is that you discover that he really is as awful as you think he is and that he’s not capable of giving you what you want, this is actually freeing. Flogging a dead horse and sticking to them like glue isn’t going to change them.

If you’re not happy now being treated in this manner or being in a poor relationship, what makes you think that you can stick it out for the rest of your days?

If the worst that can happen is that he says things that whilst cruel, you know them to be untrue, this is freeing because not only do you recognise that this person has a distorted perception of you that they’re not prepared to shift from because it doesn’t suit their agenda, but that they’re not the type of person that you should be around anyway.

If you have to convince someone of your worthiness, doesn’t that say a lot about their lack of judgement and care? You shouldn’t have to sell the concept of being with you.

The likelihood is that whatever you fear, in the overall scheme of things, it’s a fraction of what will happen in the reality. Many of us have often thought we’d never recover from breaking up with some guy, but we do.

What’s the worst that can happen? Well you won’t know unless you actually try because staying and expecting a different result from the same dynamic is relationship insanity.

If you truly want to be happy and you’re finding yourself invariably feeling rather miserable trying to extract a decent relationship out of someone who is resisting, you’re going to need to feel the short term pain to feel the medium to long term gain.

We’re afraid of feeling the pain and we’re also afraid of confronting our fears and dealing with them so we can free ourselves up to enjoy our lives.

We spend far too much time trusting in the wrong things than we do in the right.

Unless you learn to trust your gut, instincts, and judgement and act upon them, you will flounder in fear with a guy who detracts from you.

Trust is about having faith in how others (or yourself) will act.

If you don’t trust yourself, you don’t have faith in you.

As long as you ride with fear, you’re basically saying “I’d rather trust in the possibility of something bad happening rather than have faith in myself that I could opt out of a poor situation and make a better life and experience for myself based on positive choices”

This is because operating out of fear is about making negative choices born out of negative beliefs and feelings.

Feeling isolated in relationships breaks your spirit but unfortunately the only way to break the isolation is to start having faith in you.

If I had a choice between having faith in myself and taking a risk on me versus trusting someone who has demonstrated their lack of commitment to me, has been cruel, and whose actions contradict their words, I’d opt for me.

Trust me, I’ve been there before, letting my fears rule me. One day I woke up and realised that this could be it for me and that was pretty damn scary.

If you’re isolated, either because you internalised what they’ve said and done and isolated yourself as a reaction to it, or as a result of the control that they’ve exerted upon your life, or a combination of both, it doesn’t feel very good because isolation is bloody horrible.

If the ‘worst’ that can happen by opting out of your fear and taking a risk on you, is that you stop being isolated in a poor relationship with him because you’ve stepped out of the craziness into reality and felt the fear and pushed through it, maybe it’s time you braved the unknown because surely, what you know doesn’t feel that good, isn’t making you happy, and you’re not getting the relationship you want.

If what you know, the familiar, yields misery, isn’t it safe to say that opting for a different path may be where your happiness lies?

You’re waiting for their behaviour to change, for them to validate you, for them to admit their errors and poor judgements but you could be in for a very long wait. All this waiting is putting you in limbo and isolation and the fact of the matter is that you don’t need him to confirm or unconfirm what you already know – you can’t force someone too see something that they don’t want to see.

You also get to avoid the reality of your relationship and issues you may have because the isolation feeds the illusion. If you start to let in reality, you may have to acknowledge and accept some very uncomfortable things.

Back for the final part 3 where I talk about removing the power that you give them and perceive them to have.

Guest post: Love's Antihero - Insatiable Restless Souls
Understanding Code Red and Amber behaviour in Relationships
We Have To Allow Our Friendships To Evolve