Perspective Takes The Sting Out Of Rejection: It’s Broken, You’re Not 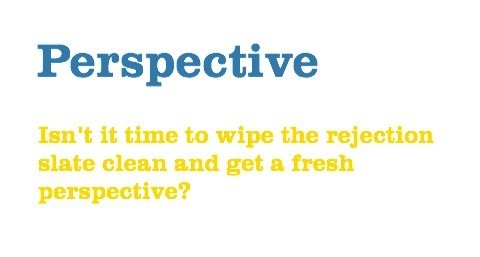 Certainly for your romantic relationships, you can ease some, if not a lot of the sting of rejection by evaluating the ‘perspective’ that you’re using to judge yourself on. Having your own aspirations, desires, and goals is fine, but they’re actually separate to your dating and relationship experiences. When you take rejection hard, you’re making some dangerous assumptions that tie your worth and what you think you’re capable of to unrelated external factors. That and you look at life through a low self-esteem lens.

You have your own agenda as does everyone else and ultimately will find a greater level of happiness with someone who has a similar agenda. In over six and a half years of writing Baggage Reclaim, I am yet to come across one relationship where two people with different agendas worked out and are living harmoniously together.

I know you might want someone to have the same intentions, motives, beliefs and values as you … even if they don’t, but the truth is, it’s a lot easier to form the foundation of a relationship, to get on with enjoying yourself without waiting for ‘the catch’, and to be able to trust and be trusted, with someone who wants similar things out of life as you. It’s not that opposites don’t attract (they certainly do if this blog is anything to go by), but the opposites that attract and progress into mutually fulfilling relationships have different secondary ‘surface’ values, but fundamentally share similar values where it counts. Basically, they’re not that opposite when you get down to the nuts and bolts.

Everything else is like trying to turn a pigs ear into a silk purse, or squeezing a square peg into a round hole, or trying to drag a horse to water to force it to drink. You catch my drift…

When dates or relationships haven’t worked out, it’s not like they’ve been evaluating whether you should meet your aspirations, desires and goals. They have their own.

To assume otherwise, is to treat it like “This date didn’t work out. I’m obviously not good enough to have a relationship or get married or have children one day or even have a life.” That’s quite a leap – a big one. Of all of the people you’ve ever been involved with, who is really that special that you being involved with them and it not working out means “You are not relationship worthy, end of. This is because I’m not interested / or don’t want the same things as you / or would even like to muck up your life while extracting maximum benefit”?

If you take everything that doesn’t work out in the way that you would like as rejection, not only are you handing over your power by running with an immediate negative reaction and clinging hard to it, but you’re missing out on the opportunity to engage in that level of self-care that only comes with self-esteem where you speak with and listen with love to yourself.

If when things piss you off and disappoint you, or you make a mistake, you switch on the background music of “Why Can’t You Just Get Your Sh*t Together?” or “Shouldn’t You Know Better By Now?” or “I Can’t Believe You’re So Effin Stupid” or “I Knew You’d Eff This Up” or “You’re no good / good for nothing” and other such tracks from your Greatest (S)hits Collection, how the hell can you have any self-esteem left to have some perspective? Now imagine if you keep playing these tracks over and over? That’s torture.

It’s a change of habit, but it literally comes down to mentally pulling over and turning off the track and speaking mentally and verbally with yourself in more compassionate manner. And don’t pretend that you’re not capable – if you’ve ever done this with anyone else (you have), the ability exists; you just like to throw it at other people.

There’s a more balanced point of view in existence and I can assure you that it’s not the one that’s centred in this idea that ‘everything’ is about you and your fault. When you lack self-trust, you end up ruminating about the judgement’s that you think ‘everyone’ is making about you, which aside from distorting your perspective further, is really about you making judgements about you. It’s like unless you have a show of hands from everyone that something that you for instance, think about your ex is true, you won’t sleep easy at night. Isn’t your own proof good enough?

You don’t know what goes on behind closed doors. It’s best to concern yourself with what’s going on behind your own door. If you don’t like it, it’s best to show them the door and fix your broken windows. It doesn’t matter what everyone else does or might think about the same person.

Now while you have a pattern to your relationship experiences, don’t just throw them all into the relationship pot like a big fat rejection – they are all different, unique experiences, which, while they may share commonalities, have different feedback and lessons to take on board. Some are not even rejection; they’re just things not working out and for a very good reason that has nothing to do with your worth as a person anyway. You’re just not that powerful.

You don’t equal the relationship, so it ending or not coming to be, cannot correlate directly to your worth as a person.

Unless you’re going out with yourself, to persist in absorbing all of the blame and being “Oh I’m so rejectionable” is to neglect the existence of of the other party. If it’s all about you, where do they fit in? Why are they being left intact by you while you’ll bust yourself up? It (the relationship) is broken, you’re not.

Your ‘rejections’ may all look the same because you tell yourself the same message afterwards – that you’re not good enough, you’ve been rejected, you’ve failed, you’re not up to standard, etc. – but they are not the same and it will serve you well to distinguish between them as it will help you to not only deal with each experience, but to cut to the heart of the original rejection and overcome it.

Were there code amber or red issues? Did you have different core values? With just one of these issues alone, if you let go of the idea that it’s all about you for more than a few minutes or hours, and use the insights you gain by acknowledging the presence of the issue(s) and what they mean about the relationship, or your hopes for one, or the person, not only do you stand to gain perspective, but you only stand to gain from the lessons learned.

Hearing or experiencing NO doesn’t mean you’re not good enough or that you’re not supposed to have a relationship (or a job etc) ever, ever again; it means that you can and will have a healthy relationship (if it’s what you want) but just not this way or with this person. Take some time out, gain positive lessons and then try again with your new insight applied.

Love Lessons: When You Can't or Won't Ask Questions When Dating (P2) Do You Have a Girlfriend/Wife?
Podcast Ep. 235: Delusions of Inferiority
Reflections: Knowing Your Own Approval