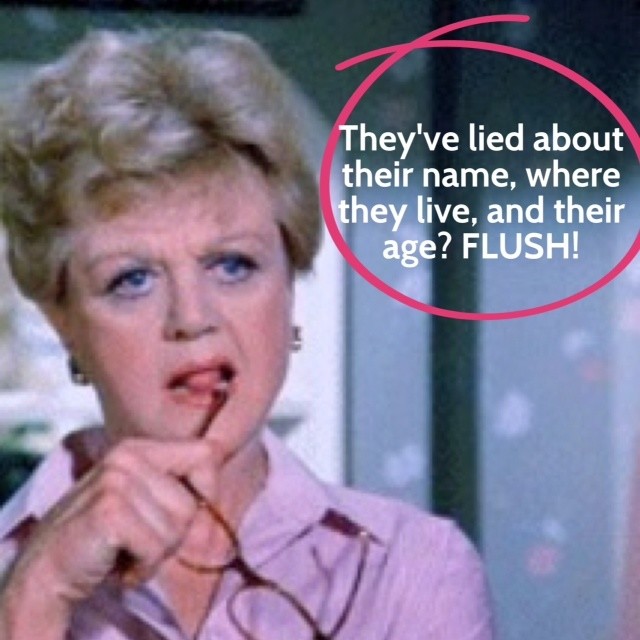 Picture this (adopts Sophia from Golden Girls voice): You meet somebody on a dating website (read: introduction website after all, you can’t actually ‘date’ on it), you exchange a few emails and texts, maybe you chat on the phone a few times and then you meet up, hopefully within the first week or two because beyond that you get into building sandcastles in the sky territory. Between reading their profile, viewing any photos and these initial exchanges, you glean information about that person but at some point, maybe when you meet up, it comes to light that this person hasn’t been truthful and you feel uncomfortable.

Whatever the lie is and whether they regard the lie as big or small, when it comes to light, it tends to create an awkwardness at best and at worst, a sense of deep confusion and even being defrauded.

We live in a day and age where there are some who don’t see an issue with making up jobs and qualifications on their CV/resume and where others take it as a given that ‘everyone’ lies on dating websites, plus everyone who lies and omits has a reason for doing so that they think ‘makes sense’ or is legitimate, but what we must not do is get into the habit of disregarding the concerns of people who feel uncomfortable with lies, exaggerations and omissions.

History, over-empathy, and yes, sometimes a need for a BS Diet, blind us to very real issues because we focus on how we desire things to be, not how they are. Sometimes part of why we sympathise is due to the fact that we’re not truthful ourselves and that’s where we are most likely to be okay with what’s happened. Of course if we’re trying to improve our self-esteem and are striving to be emotionally available, being met with dishonesty at ‘Stage 0’ is going to be unsettling and especially when we are at a really important growth stage in our lives where we want to break old patterns, ignoring that discomfort can really do a number on our sense of self.

If you feel uncomfortable with lies, omissions, and exaggerations that you’ve uncovered with somebody you either haven’t met or have only known for a short time, listen to that discomfort because it’s alerting you to be mindful – feet and head firmly planted in reality. You are well within your rights to FLUSH.

People will say stuff like, “Oh, they lied because they were afraid that you’re a stalker” (Yes, of course you should be worried that the person who is lying to you thinks that you’re a stalker…) or “Maybe they’ve been really hurt before” or “Stop being so judgmental”, or whatever, but that won’t remove the reasons for your discomfort although it may camouflage it temporarily, causing you to put the pursuit of expectations or these people’s approval ahead of your concerns. Note, it’s not “judgmental” to feel uncomfortable with lies. If anyone has judged anyone, it’s the person who told the lie.

Look at how many of us find it difficult to have a straight up, honest conversation with someone who we do know. How the hell are we supposed to do this with strangers and know that it’s honest?

Some people find it difficult to step up and clarify ambiguous situations and concerns with people who they’ve been involved with for years. Lots of people pussyfoot around family members or fear alienating their friends by speaking up or asking what they perceive as ‘tricky questions’ aka ones that pave the way to honest communication even it only ends up coming from one side.

In previous posts I’ve referred to The Debit and Credit Trust System. In essence, once you’re willing to listen to and respond to you and so in turn, increasing self-awareness, self-knowledge and of course your self-esteem, you can enter into situations with a basic level of trust (let’s call it 70%) because you trust you to be conscious, aware, and present, and to also act in your best interests. You have trust because you trust you. You then allow situations and people to unfold in reality and you either increase trust based on real consistent evidence or you decrease it instead of trusting (or distrusting) blindly.

When a person you don’t know or who you hardly know basically asks you to accept that they have already lied to you in some way, you are in essence being asked to trust that person beyond the basic level of trust that you enter into situations with despite not having the evidence to increase trust, especially because contextually, if anything you should be decreasing trust or certainly not budging from your initial position. That in a nutshell is why it’s a problem when you encounter lies no matter how innocuously they’re being portrayed as by the other party.

They’re saying, “I know I haven’t been honest with you and that we don’t really know each other but I need you to trust me.” Um, that sh*t doesn’t make sense. It’s also unsafe. They don’t enter into a situation with a basic level of trust and they make a judgement about you or people in general that governs their lie and then expect you to have more trust than they do/did? You then have to play Jessica Fletcher even when you really don’t want to because you then have to verify information you’d taken as true plus even if you didn’t do that – probably not a bad idea to do so though – you will then have moments where you wonder if that person is being truthful. There’s enough anxiety going on with this whole dating malarkey without feeling confused about your gut and their authenticity. This can be made all the worse if you find out as opposed to them fessing up immediately.

People do make mistakes and misjudge what they should do in a situation and so they end up giving the wrong impression of themselves, and yes some people do habitually tell lies. When you ‘meet’ somebody online, initial conversations and meetings need to have an element of verifying what they’ve portrayed and claimed, as well as what you’ve assumed. Thankfully if any discrepancies come to light at ‘Stage 0’, there can be little damage as opposed to finding out further down the line when you typically struggle to discern fact from fiction and find it difficult to disentangle yourself due to your feelings.

Ultimately, you have to decide what you’re comfortable with. No one else can do that for you including the person of interest. Regardless of whether you proceed or not, the one thing you need to do when discrepancies become apparent is to take it as an at best, code amber warning and stop, look, listen, and do not proceed until you are absolutely clear and genuinely comfortable about what’s going on.

There are a lot of people who tell porkies on the internet but there are plenty of people who don’t. If you’ve used a dating website in good faith and not ‘tweaked’ reality, it’s understandable to feel uncomfortable when it becomes apparent that someone who you’ve been engaging with isn’t being truthful. If anything, be more worried if you don’t feel uncomfortable.

PS Please be safe online whether it’s with dating or anything else. This is not a post about broadcasting personal details online or about giving out your info to every person you speak to. Be safe. That comes as standard. But you don’t need to lie about your age, your photo, whether you have a degree, which city, state/county, country or whatever you live in for safety reasons especially when people end up trusting you based on this misrepresentation and you keep up the lie. These are for vanity and BS reasons alone.

Revisited: Understanding what your trust points were in your shady relationship
Podcast Ep. 235: Delusions of Inferiority
Slow Your Roll: Why Being Asked For Your Number is an Expression of Interest, Not a Guarantee