Why Affairs Are Like Being Double-Crossed In A Heist 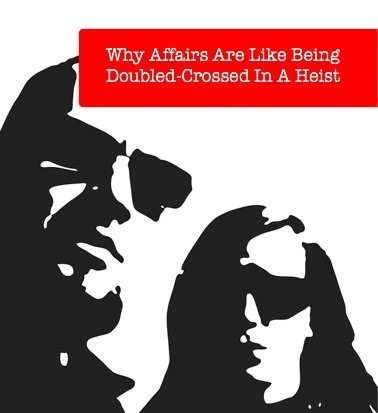 Over the years of writing Baggage Reclaim, I’ve heard from many women and men who have been left empty handed, duped, disillusioned, distraught, angry and a plethora of negative emotions after being involved in an affair. While many of these people feel awful about deviating so far from their personal values that they wound up not only in a deception but often ended up feeling emotionally bankrupt, there’s also a significant chunk of people who while they may feel aggrieved at deviating from their values, their grievances are focused on the ‘deal’ not coming through.

As the Other Woman/Man, you’re under the impression, even if it’s not directly stated, that for your participation, which as a result of deviating from your values may feel monumental, you’re going to share the ‘takings’ between you and run off into the sunset. All you’ve got to do is hang tight and engage in the deception.

The Cheater is committing ‘fraud’.

It may be that when you first met, you hadn’t intended to be involved; maybe you were just having a good time. But then they started talking up the future and the opportunities, and you suddenly started to believe in the possibility of being together.

You operate under this misguided notion that they’re an honest person being dishonest to the other party due to the circumstances, not because they’re actually dishonest. If you’re anything like I was, you’ll think that you’re the one they’re being honest with.

There’s no such thing as an ‘honest cheat’. That’s an oxymoron like ‘casual relationship’. They lie to themselves, they lie to others, and they most definitely lie to you. Of course some base their reasoning on a complex framework of lies and so will stubbornly cling to their lies, because to let go, would be to place the responsibility and accountability on themselves that they seek to dodge.

Some of you may have actually started out feeling like you were the more ‘powerful’ party in this. They were chasing you and you could take it or leave it. They were trying to convince you but now, you’ve been left with your head spinning and wondering where it all went so wrong.

Unfortunately I’ve seen enough episodes of 24, CSI, and The Wire, never mind various action films to know that often, the person who thinks that they’re in on the deal gets shot or left out.

You keep wondering when they’re going to ‘come good’. They keep talking about how they just need more time, or that the ‘goods’ are in a safe place, and how they’re just waiting for the right moment, their cat’s stuck up a tree, they haven’t got clean drawers, or they suddenly remembered various problems they have that they’ve got to attend to.

It’s difficult under these circumstances not to get a bit, if not a lot, twitchy. Are they going to come through? Are they shady? Have they double-crossed you and cut you out of the deal and cut in one of your colleagues that sits a few seats away from you, or an ex, or even their current partner? Oh my God, what if they’re ‘back together’? Why didn’t they just tell you? What about everything you’ve invested? And round and round we go.

Of course the deal goes sour. It may not be today, it may not be tomorrow but it will be soon enough unless you’re pulling an ostrich and holding on tight come rain, hail, shine, or the next decade.

And then you’re angry and you know what? Who wouldn’t be? You got played, even though they may deny it and claim that they really meant to cut you in, but something came up, or you ‘did’ something, or some other lame excuse.

Here’s the thing though: It was an affair. Don’t get me wrong – they’ll have done their wheeler-dealing, lying, omission, and even pressuring, but you knew that there were a lot of things wrong with this situation and you’ve also lied to yourself.

I say this from experience. My anger and indignation gradually gave way to grudging and then welcomed responsibility when I realised that I’d known what I was dealing with – I had just hoped to be exempt.

If you’re still angry about the fact that you’re not still with them while they cheat, or are angry that they haven’t left, you’re missing the point – it was an affair.

If you’re still angry, your moral code hasn’t caught up with you yet. It can’t have done – you’re still bargaining and justifying that you had good reason to be in this situation, because it’s that classic Justifying Zone, the slippery slope where people go to after they’ve emotionally or sexually invested and need to find any reason, even one that’s straw-like to justify it.

In the case of affairs, we like to think there’s a whole load of damn good reasons why we would get into a situation like this and continue. The truth is, often there wasn’t at the outset. It’s only further down the line when it suddenly occurs to you that you’re in an affair and that means you’re in something shady that you start wheeling out the reasons and searching for even more. You need to find a reason for the ‘whim’ and gambling.

There’s an over-correlation that happens with affairs, much like it happens when we meet someone who possesses certain qualities or characteristics and we assume that they possess others and that they’re ‘right’ for us. With affairs, we over-correlate our presence in one and assume that it’s because of a connection, ‘chemistry’, deep feelings, ‘fate’ etc.

Actually, often you’re in an affair because you’ve taken a detour down a shady alley in Low Self-Esteemville – you just may not know it, possibly because you’re running from and shielding yourself from other hurts.

If you want to move on from the affair (I hope you do because these things are bloody painful), you’ve got to stop acting like you’re an ‘innocent’ victim – you were happy to be in on the heist when you thought you had something to gain. Now that the tables have turned on you and you not only haven’t ‘won’, but in fact seem to have left some of your sense of self on the table, how much is it going to help you to be a victim?

There’s no peace or growth in claiming helplessness and that you’ve been robbed – you can’t call it a robbery because it hasn’t turned out how you’d liked, when you were calling it ‘love’ when you thought it would go your way.

The same qualities and characteristics that enabled you to have an affair with them, are the very ones that they’ll use to cut you out or at least lead you down some blind alley’s. What you don’t want, is to be that person who is waiting and waiting and waiting, while they keep palming you off with excuses, while they go and live the good life.

The takeaway from this isn’t to give yourself a hard time – taking responsibility doesn’t mean taking on the blame for the whole thing. Own.Your.Part.

This means taking the focus off them and positively putting it on you – this experience was a sign that you don’t love you enough and need to deal with whatever you’re avoiding. You’re human, you make mistakes, and you want to love and be loved – forgive you and get back on track.

You’re not going to feel good or gain a healthy relationship out of something based on deception that leaves you feeling bad. Forget about them; make things right with you.

Can a Booty Call Grow Into a Relationship?
Standing By Your (Broken) Man - Part Two
It Started Out So Great - Why Can't He Go Back To Being 'That' Guy?
Share this...