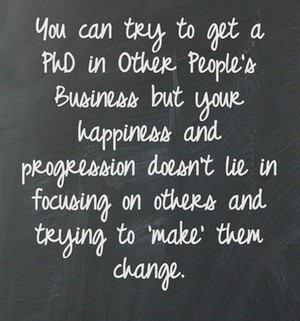 Just as our relationships provide a window into understanding what we need including where we need to step up for ourselves, our gripes, frustrations, and repeated complaints also provide a window into not only understanding what we need to be doing to live in line with our own values but also into where we may need to adapt our thinking and behaviour. Why? Because often the things that we dislike in others point to something that we can stop doing or do more of to limit the impact, or… we can even be guilty of doing the exact same thing.

Like recently when I listened to someone vent about their sibling being inconsiderate and controlling. After hearing the chain of events and basically being expected to agree, I gently pointed out that they both seemed to be mad at each other for the exact same thing. “You’re angry because you don’t like the comment he made and you feel like he’s trying to force you not to like this person, and he’s pissed off with you because he doesn’t appreciate the comment that you made and he feels like you keep trying to make him like this person.” Neither party was empathising with the other or respecting their own positions.

Your frustrations with others provide a window into understanding where you may need to adapt, not because what they’re doing is your ‘fault’, but because if there is something that you can address, you won’t continue letting their behaviour have a hold over your energy and happiness. It helps you know your own boundaries and values.

As humans, we do like to home in on what others are doing and to attempt to control the uncontrollable. It can seem like a far more attractive prospect to practically get a PhD in Everything They Ever Did To Piss Me Off & Why They Need To Change To Be a Better Person That I Would Feel More Comfortable Around, but it’s a distraction that really stops us from being truly honest with ourselves and living our own lives authentically.

These realisations don’t invalidate the fact that what the other person is doing is wrong / annoying / upsetting etc., but your happiness and progression doesn’t lie in focusing on him/her and trying to ‘make’ them change. You may even have got to the point where you’re resigned to complaining about the existence of the issue because you’ve determined that their change was and is the only solution.

The thing is, their actions and the fact that it’s pissing you off isn’t happening in isolation. Their actions are theirs to own and are a reflection of their habits and their typical response to certain situations, and are not influenced by your worth or ‘one false move’ on your part, otherwise if their response was an anomaly, they would have reverted to their typical behaviour, not continued – you’re just not that powerful. However, if you want how you feel in the situation to change and you want to gain some traction and move forward, you need to take the focus off him/her and bring it back to you.

Another person changing isn’t going to be the solution to your problems, especially if you are continuing with habits of thinking and behaviour that you responded with in the very situation that wound you up.

Remember that it’s not about making you at fault for other people’s behaviour because they’re rolling how they roll, but it is about asking you what if anything, you can be doing differently that would either make you less likely to be in this situation in the first place or will help you to neutralise the impact.

More On Sexual Values: Questions To Ask Yourself Before Embarking On Sex
Am I Single Because I'm Picky?
Reclaim You: 100 Tips For Dating With Your Self-Esteem In Tow