After The Breakup: Do You Need To De-friend Your Ex on Facebook? Dealing With Your Ex’s and Obsessions 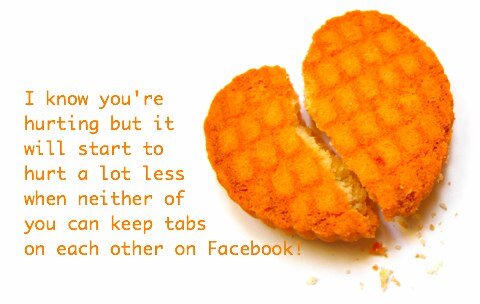 Before Facebook, I would never have been able to keep in touch with peeps I went to school with etc without having to go to much greater lengths and efforts. Now, I get little snapshot glimpses into the worlds of people and I know stuff like who’s pregnant, who’s suffering with heartbreak, who got married, who’s sitting on the toilet, who spends too much time playing Farmville and I’ve even witnessed a nasty divorce unfolding.

Keeping in touch has changed and so has breaking up.

Back in ‘olden times’ you really had very little means of keeping in touch with someone or keeping tabs on them. Now when you break up, along with lazy means of communication like text messages, email, and instant messenger, you now have to deal with Facebook and other forms of social networking. The most frequently mentioned source of online angst is of course Facebook. After experiencing massive growth in the last few years, it’s causing sleepless nights, compulsive urges, and arguments about being insensitive or why they were snooping around in your business in the first place. Before, where you could break up in private, by opening yourself up to ‘sharing’ information about your life on Facebook, it means that you have to go through what can be quite a public and often painful process of breaking up online.

Facebook is compelling because it’s a very passive way of getting a window into other people’s lives – you can snoop without feeling like a snooper. However for the broken hearted (and the type of person hellbent on keeping a foothold in your life), it’s a very passive way of keeping tabs on your ex. It’s on one hand brilliant for rubbernecking and on the other, it’s a painful kick in the teeth that reminds you that they’re moving on and…you’re not.

The most common issues centre around:

Trying to be the Good Girl/Good Guy and stay friends and then feeling entirely uncomfortable with watching them move on.

Becoming obsessed with tracking your ex’s movements on Facebook.

Your ex using Facebook to keep a foothold in your life, pry into your private life and generally make a nuisance out of themselves.

Being worried about how you’re perceived by mutual friends, their family etc post breakup or having these people create awkward situations for you.

But it doesn’t have to be this way or you can at least keep the angst to an absolute minimum.Even with the most friendly of partings, some space is needed and unless you have hide of rhino or have already moved on yourself, you’re going to find it pretty difficult if your ex is publicly moving on or looking like The Happiest Ex Alive. Unless you have to see your ex each day (I had to sit across the office from one of mine), the less reminders you have of them the better.

When you break, you break. That means shutting out access to your ex on the likes of Facebook because whether it’s that you couldn’t cope with their updates the first, fifth or twentieth time, or they’re interfering in your life, or mutual friends are creating discomfort, you need space from them on Facebook too.

Get over this ‘let’s be friends’ malarky

Many of us are obsessed with being The Good Girl (or The Good Guy) so of course when you break up, you make the shady decision to be friends. I’ve always said – the reason why we want to stay friends with an ex is so that we can 1) not feel so bad (either that we’re not an assclown or that we’re not friend worthy), 2) keep tabs on them and 3) hopefully show them what they’re missing.

Facebook has become the 21st century way of doing the insincere ‘let’s be friends’ after a breakup.

Let me stress again – the great majority of the time when someone suggests being friends after the breakup or accepts your offer, it’s because it is the polite thing to do. OK that, and the worst types are hoping they can line you up for a shag at a later date…

Now with Facebook, people can get even lazier and may not even bother with the perfunctory text or phonecall anymore, after all why bother when with a few clicks they can see how you’re doing and work out whether you’re miserable (they think you still want them) or happy (they think it’s time to mess up your life and get in touch).

The reality is that when you stay friends with an ex on Facebook you can both comfort yourselves that you’re ‘good people’ that can stay in touch and of course, you inadvertently hope that this will act as social proof to those that know you both.

Really, you have to stop giving Facebook too much power in your breakup. If you’re obsessed with checking your ex’s movements on Facebook, it’s not Facebook causing you pain – it’s you!

The best thing that you can do with your ex on Facebook is either 1) de-friend them or 2) hide their updates from your newsfeed.

Remaining friends with your ex on Facebook assumes that:

1) They’re not an assclown and are actually friend worthy.

2) While you may not be over them, you’re OK with it being over.

4) While you won’t be skipping with joy, you’re prepared for the possibility of hints of their life appearing on Facebook whether it’s on their profile or those of mutual friends.

5) You won’t develop a compulsive urge to check on their updates morning, noon, and night.

If you can say yes to the above then it seems fairly safe to stay friends. Even if you do find yourself uncomfortable you can always hide their updates from your newsfeed. Another instance where you can stay friends with your ex on Facebook is if you’re not a regular user – you’re unlikely to be privy to their updates.

When is it time to de-friend your ex on Facebook?

1) When they’re an assclown. It’s one thing to have gone out with them in the first place but trying to hold on to an assclown and expect a friendship from them is like trying to make a crumb into a loaf in a relationship – not going to happen. Don’t worry about what they’ll think; it’s time to start worrying about what you think and stop being so fricking nice! Note, lots of assclowns have narcissistic harems cooing around them online or they opt not to have a Facebook profile (too much evidence) but do find ways to check up on you via mutual friends.

2) When they’re keeping tabs on you and trying to meddle in your business/keep a foothold in your life. All you’re going to end up doing is feeling like you can’t say and do what you want on Facebook and censoring yourself. Trust me when I say that they’ll find meaning in everything you put there and either throw it in your face or use it is an opening for an ego stroke, shag, or a shoulder to lean on. Do you want to be guilt tripped? Do you want to feel like you’re afraid to use Facebook? You may also end up feeling harassed if they persist and if you guilt trip yourself and hesitate about de-friending them for fear of upsetting them further, it’s just opening yourself up to further pain.

3) When you’re keeping tabs on them on and all up in their business. When you find yourself on Facebook morning, noon, and night, and seizing on grains of information in their updates and deriving meaning from them, or interrogating them about that woman you saw with them in a picture, it is time for you to de-friend them for your own sake. If you’re the type of person that hiding their updates from your feed isn’t enough and you have a compulsive urge to track them on Facebook, your only option is to de-friend. This also includes keeping tabs on their friends and you will need to de-friend them too because the reality is that you don’t want to make a nuisance out of yourself and you don’t want to do anything that at best will be embarrassing and at it’s worst, humiliating.

Trust me, the emails I’ve had from some readers – if you keep this up, it’s like being a hop, skip, and a jump from going too far and crossing into stalking territory.

Remember, aside from the fact that they’re likely to de-friend you if you persist, if you start calling/emailing/texting them about stuff you’ve seen on Facebook you will inadvertently cause them to feel that they can legitimise a negative perception of you and if they treated you poorly previously, they’ll even use this to legitimise that behaviour.

Cold turkey and de-friend! If you don’t, you will end up being trapped in your feelings and you won’t be able to get over them as you’re continuing engaging and feeding an illusion via the internet. You have to let go of them and not try to hold onto them and control their agenda via Facebook or you will throw yourself in the front line of pain.

When should you defriend mutual friends?

1) When they’re not actually your friend

2) When even though you’re not friends with your ex on Facebook, they use information they see on your profile to shit stir

3) When you’re No Contact and want to distance yourself from that ‘old life’.

4) When your ex is using them to get access to you.

Making it clear to friends that you share that you don’t want to be informed about anything and that you’d appreciate it if they didn’t gossip about you to your ex. This is a conversation I suggest you have, Facebook or no Facebook problems.

And of course, you could just not go on Facebook. Seriously, the sky won’t fall down. I know lots of people who have done this after a breakup and it has spared all of them from rubberneckers checking to see if they’re OK, awkward questions, and even worse, awkward updates from their ex. Ask yourself what you would have done prior to the existence of Facebook and as long as the answer to that isn’t ‘stalk them’, do that.

As an aside, if you’ve been monitoring their movements on dating sites, Twitter etc, I’d remove yourself too. Do you want to get over them or do you just want to be a spectator to your pain?

Check out my ebook on the the No Contact Rule which stresses the important of cutting contact with your ex, plus my ebook on emotionally unavailable men and the women that love them, Mr Unavailable & The Fallback Girland more in my bookshop.

The 10 Commandments of Breaking Up
Reader Advice: Help me understand my commitment-phobic obsessive ex!
The Ten Commandments of Coping With and Moving On After a Breakup Series
Share this...