Am I Being Used? Recognising When You’re Being Taken For a Ride… Possibly Literally… 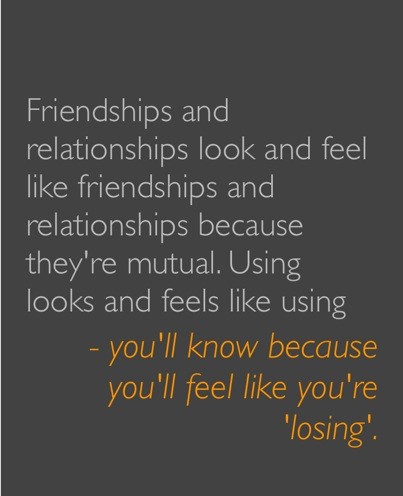 One of the issues that many people struggle with is recognising when they’re being used, which is when a person avails themselves of something or someone as a means of accomplishing their chief aim. They exploit what they perceive as a vulnerability in order to gain an advantage.

While there are instances when it’s quite obvious that you’re being used, like when somebody suddenly starts spending a lot of time around you and then asks you for something and then once they’ve got it, they either ask for something else or move onto someone else, being used is something, that like abuse, can creep up on you and catch you unawares. When you recognise it, you may doubt yourself, especially if you tend to like to ‘see the best in people’ or you’re inclined to be a blame absorber.

Using is likely to have an element of ‘targeting’ – recognising that a person can be of use, with it sometimes coming down to exploiting what they perceive as ‘vulnerabilities’, which may just be good traits, such as being giving or trusting. Or, having the perfect ‘flaw’ that’s not a flaw like a ‘suddenly’ unpalatable age gap, race, religion, child etc.

Readers regularly share stories with me about people who came back into their lives after a long time (Returning Childhood ‘Sweetheart’ and boomeranging exes) as well as tales of casual relationships that started out oh-so-fun but resulted in plenty of pain. It’s easy to get caught up in why they thought that an ex who did them over when they were sixteen was going to be their saviour thirty years later, or whether one can truly expect to get into a casual involvement and not get their fingers burnt when what they really want is to be loved inside a relationship, not dialed (or texted) as if ordering a sex pizza with a topping of ego stroking pepperoni, but there’s something very important being missed here:

Of all the people in all the world, why did they get back in touch with you? Why did they choose to tap you up for a casual arrangement?

If for instance, your younger work colleague goes through a breakup and then starts flirting with you and then propositions you for a casual relationship, you might feel flattered, especially if you’re not feeling that confident about your dating prospects. You might think Ah, what the hell and dive right in there for some fun and maybe it is fun for a while until you’re not able to keep your feelings in check. You tell him/her that your feelings have changed and they say… “I really like you but I just don’t think a relationship with our age gap would work” and it becomes clear that this is actually a strong value that they’ve always possessed, not something ‘inspired’ by you.

Now granted, it started out casual and I think we can overestimate our capacity for these involvements, telling ourselves “I can handle it!” because we delay dealing with reality and considering longer-term consequences for instant gratification and the fantasy. If one person no longer wants casual though, it’s no longer casual which means naked time and ‘hanging out’ is over – it’s no longer a mutually fulfilling agreement and it’s very possible, it might never have been. While the age gap reasoning is a tad shady considering that it’s not like the age difference is new information, we can be generous and say that at least this person knows their values.

Here’s the issue though: I’ve had quite a few people share alarmingly similar tales – just swap ‘too old’ for ‘too young’ or being work colleagues, or the ‘wrong’ colour, religion etc – and the truth is, they were chosen for these reasons as it made it easier for the other party to extricate themselves further down the line.

Take the age gap example. It’s a lot easier to avoid dealing with getting over a breakup by starting up something with someone else as a distraction and if you want to avoid putting yourself in the position of starting something with someone who might then think that it was going somewhere, you pitch it as a casual relationship, which in your mind, pitching it as such and dropping in information like just being out of a relationship will cover your backside. When you scan your ‘perimeter’ and ponder who you could get involved with and maybe how you can meet someone without having to do the whole going on a dating site or cruising dating sites or even doing the whole ‘getting to know you’, you might look at your social circle or your colleagues. Then you choose someone whom you’re attracted to, but you know that it can’t go anywhere because you’ve already decided that it can’t anyway, which will give you the perfect get-out should they try to ‘upgrade’. Job done.

If you’re in this situation, ask yourself why you were chosen and I assure you, it’s nothing to do with your ‘worth’ and everything to do with how the situation could work for the other party and yes, it’s very possible that they thought that you’d be ‘flattered’.

It’s the exact same thing when you get these fly-by-night’s getting back in touch to take you on a trip down nostalgia lane, often approaching you on Facebook or with a text or joke email. Why, when they decided to flip through their mental Roladex of people who might be receptive to being approached and some flattery, did they think of you?

Most users when accused of being users, won’t hold their hands up to it simply because it’s not how they want to be perceived or what what they want to think about. They see their actions in a more benevolent light as if to say that they’re doing you some big flippin’ favour, giving you an ‘excursion’ away from your humdrum life or giving you a dose of their magical charm including Future Faking and Fast Forwarding that for some reason they think you should be thrilled to get. They rationalise that you’re getting something out of it, even if what it is, isn’t much, or not what you wanted, or isn’t on mutual terms and has been ‘given’ in a manner that allows them to ‘profit’ from you even though you’ll feel increasingly drained. They overvalue what they think that they’re ‘giving’ you, but it’s not ‘giving’; it’s a hidden agenda. It’s also very patronising.

You’re being taken for a ride, possibly literally…

It’s why you can feel so hurt after recognising that you’ve been used – you may have taken him/her at face value, trusted, given (even if it was a tad misguidedly especially if done in haste, on the internet or via an arrangement pitched as ‘fun’ that really wasn’t that fun), and they were just putting in hot air and as little as possible to get what they wanted.

Users are distinguished from people who maybe did start out with ‘good intentions’ and have screwed up, recognised it and sought to make amends or have at least stopped, by the fact that they’ll veer between seeking to get their needs, wishes and expectations met aggressively (by force), possibly with a smile on their face telling you how you’ll both benefit, or passive aggressively, through obstruction and basically saying one thing, doing another. They will not care about the impact on you because they will continue using until they’ve got what they want or you cut off their supply.

If they’ve aligned themselves around you at a time when it suited their greater purpose of having a place to stay / money / a job / a reference or just seizing on a vulnerability that would have you giving to a greater degree than you would under ordinary circumstances, you’ve been used, especially if now that you no longer serve a purpose or have figured out what is going on, they’ve suddenly disappeared or have become quite mean towards you.

Once you suspect or know that you’re being taken for a ride, it’s stop, look, listen and step back and adjust your boundaries time.

Check in with you when being around your family stresses you out
Querying Actions Not Matching Words Isn't About Trust Issues
The BS Diet: Natural Consequences & Why You Need To Stop The Big Cover-Up