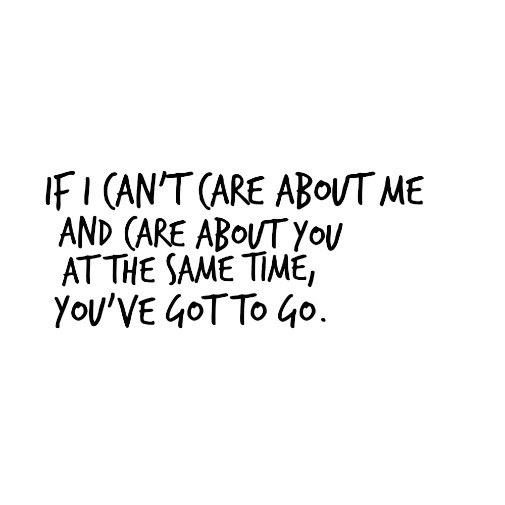 People who think that they are mighty and powerful and who think that they can force you to oblige their wants and in fact demands even if they are contrary to your own needs etc., and all while encroaching on your rights as a human being, aren’t so powerful and mighty once they realise that you don’t give a beep. It’s at that point that they realise that you just don’t care that much that you’d do you an injustice just so that you can prop up their ego.

What you must understand about people who rely on a sense of superiority on their part or obvious signs of you feeling inferior, is that they pull their moves and if you respond by, for example, looking for validation or claiming that you love them or looking for them to be who you hoped for them to be, they realise that you care too much. Their own rationale and attitude does not make sense but at the point where you are willing to continue engaging them and/or trying to make sense out of nonsense, your rationale (and attitude) does not make sense either so they are then able to exploit this.

At the point where you’re saying or showing, “I don’t care and in fact, I don’t care that you think you’re mighty and powerful; I don’t care if you’re going to leave or find somebody else or disapprove or whatever”, they lose their power and mightiness plus they end up feeling wrong-footed. They realise that you’re a grown-up and that you are not reliant on them for definition and vitality.

It’s not in the playbook; it’s not in their predictions. They don’t know what to do with this kind of mindset because they rely on what they perceive as weakness. They rely on exploiting the vulnerability that exists when a person is not responding to boundary breaches with ‘increased security’ (read: more boundaries and basically having an active response). They interpret a passive response or your seeming positivity and hope even in the face of shady behaviour, as a green light for code red behaviour. This all screams, I care too much. It says, I care so much that I will derive value from my interaction with you and my self-image and future perception and actions will be impacted by you.

Present the person who has enjoyed the fringe benefits of you caring too much with facts, indifference, and in fact resistance to their bullsh*t (BS), and they have to move away from you or at the very least keep their distance. They learn to stay behind the line and put these same attentions on someone else who is more receptive which before, when you cared too much, would have been a devastating thought but now is a the welcome realisation that they’re not your problem anymore.

When a person or group of people have built their security on this idea and image that they are to be seen and treated a certain way and then they’re not, if they cannot ‘make’ you, they will find it much more attractive to cast you out or keep a safe distance because you are a threat. For bullshitters, it’s very exhausting and in fact bloody scary, to deal with people who smell BS from a mile off and laugh in the face of it.

When you care too much about somebody who cares too little about you or just the impact of their actions upon others, you are pumping them up. You’re doing it in the hopes that you’ll be rewarded for your collusion. You’re waiting for the tipping point.

If someone has had the luxury of bullsh*tting you on occasion, they will feel safe in doing so again, possibly upping the ante to what in retrospect will be seen as new levels of ridiculousness. They think that you care so much that it will give you rose tinted glasses and a fur coat of denial. Looking back, this realisation that they were starting to feel near invincible and possibly getting increasingly sloppy in their treatment of you, can really grate because as you play back your mental tapes and allow what they’ve been doing to sink in, you can feel like a fool for having believed.

It’s OK to care what people think about you but never care so much that you 1) edit the hell of yourself or 2) stop doing what you know is right, or 3) forget to take your own needs, expectations, desires, feelings and opinions into account.

It’s not that you need to stop caring about others, and you definitely don’t need to give up on trust and any positive qualities, but what you do need to learn through being more boundaried is where to invest your goodness. Roll back when you are not experiencing a mutual relationship. There is a line with caring and it’s very possible, and in fact necessary, to care about you as well as caring about others and if you cannot do both or you’re caring about others in the hope of getting some of it to flow back your way and fill voids, it’s a code red alerting you to the fact that you are avoiding a personal responsibility while giving this person way too much credit and power. You don’t know where they end and you begin. When you’re caring to that level where they have the power to make or break you, this sense of caring about them is a mirror that’s showing you that you’re not caring enough about you.

Locate that responsibility; locate where you may be inadvertently victimising you by continuing to engage and you disarm the power that you and they have thought that they have over you. You stop caring more for fear than you do about truth and peace.

Each and every time I find myself in a frustrating and painful situation, it changes, not because I manage to ‘make’ the other person change but because I change my response to it by identifying where I’ve become too focused on caring too much about something that doesn’t warrant it. Options open up but these people also stop being so powerful simply because they only really were in my mind and this changes the dynamic. You stop almost cowering around these people and playing it small.

You do not need to give you up in order to experience love, acceptance, and respect. You do not need to stop feeling. What you do need, though, is to see more to your interpersonal relationships than ‘servicing’ others so that you can be ‘chosen’ and finally feel that you’re in a position to live because all it does is give people an overinflated sense of their own importance while diminishing your self-worth. No one is that special that you should do that to yourself.

Relationship Advice: He's abusive and possibly a narcissist but I love him. Will he change?
Relationship Amnesia - When you keep forgettting what's REALLY going on
We can express our anger and frustration at work *without* being intimidating