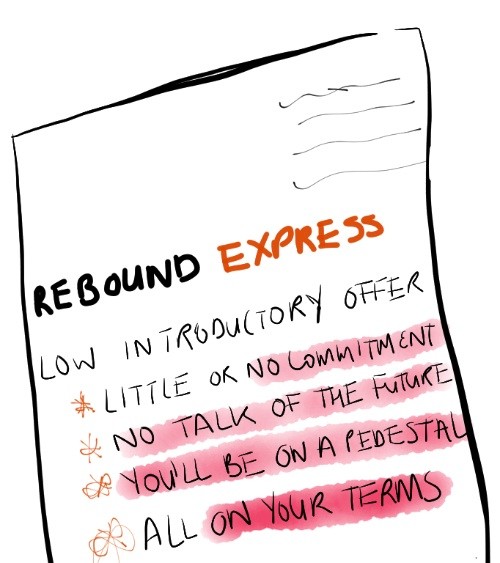 When I worked in advertising,  I’d have to deal with clients who wanted a price reduction based on previous experience with advertising with another company or publication. If you work in sales or run your own business, this scenario is very common and one of three things is likely to happen:

Sound familiar? Well it will do if you’ve been the Fallback Girl (or Guy) who has spent their time trying to convince and convert someone who is reluctant to try dating, to try a relationship, to commit etc., because of their previous experiences.

You’ll be particularly familiar with this if you’re a Buffer in a rebound relationship, effectively acting as an emotional airbag that helps their partner to make the transition from a previous relationship that they’re not emotionally (and possibly legally) detached from. If you’re playing Florence Nightingale and trying to fix/heal/help so that they can be fit for relationship purpose, then you’re also feeling the effects of a ‘price reduction’ based on previous experience with somebody else.

These situations are tough because we’re empathetic and sympathetic enough to recognise some of what that person may be going through. If they’re very forthcoming about the experience (and likely revealing their anger, hurt, sadness, disillusionment etc in the process), we may feel particularly sympathetic and understanding to the point where we may decide to park our own needs, expectations, feelings etc, so that we can give this person a chance to get their wings. We’ll show them how great we are and how they don’t need to worry and how we’re basically an entirely different person and situation, and yet we end up feeling devalued and possibly like an armchair psychologist.

Whenever I tried to work with clients like this, what became apparent was that they said that they were interested but they were also quite skeptical, and that’s dicey territory when you apply that into interpersonal relationships.

When you’re coming from a position of skepticism versus one of open-mindedness, as well as a being present and having a level of trust, you’ve effectively already made up your mind even if you won’t admit it plus you’re gun shy. It also becomes somebody else’s responsibility to solve your internal issues and that’s a fast slide down a slippery slope.

Another issue I found was that it was very tricky to upgrade these clients to the correct pricing because I’d set the tone plus it was also the value they attributed to it. By compromising, they interpreted this as me ascribing their value to it, not as me giving them a trial, so I stopped. Some eventually came on board and the ones who didn’t – they went and found somewhere that they could value and treat similarly.

When you’re in this situation, the person who wants to manage down your expectations and wants you to accept less input from him/her, is living in the past.

They also don’t value you for who you are or aren’t willing to go through discovery and let you and the interaction unfold because they don’t want to ‘spend’. They’re on an economy drive on your time. Sure you’ll keep thinking of the ‘good times’ and the ‘good points’ but on reflection, it’s a with one hand they giveth and with the other they taketh away situation. Next thing you know, you’re giving them the price reduction in the form of some sort of ambiguous setup or a casual relationship where you have to go with the flow and are afraid to rock the boat. They may say that you’re in a relationship but then undermine any progress by passive aggressively sabotaging things each time it feels like you’re going somewhere. I know of so many people who get dumped or have fights picked with them after seemingly happy occasions such as birthdays, weekends away or meeting the family.

You can fall into the trap of giving them the equivalent of a low introductory APR and free balance transfers on a credit card, with the view that given enough time, they’ll see that you’re not the same as the past and will see all of your great qualities. Many of you already know where that ends up: You feel devalued and unappreciated in an imbalanced relationship where there’s three of you in it whether it’s the shadow of the ex, or the elephant that is their unresolved and very much impacting issues.

You’re not an interchangeable commodity; you’re an individual entity with your own feelings who is entitled to expect a mutual relationship (if it’s what you want) and who has no business compensating for where others have erred. You have to tidy up from your own experiences and learn from the insights gained… and they do too. These situations are painful to acknowledge and walk away from. Very often you end up feeling guilty. You think that you’re being impatient and demanding by expecting a person who expects you to stick around and meet their needs etc on their terms (while sidelining your own), to get their emotional house in order and value you for who you are instead of devaluing you based on the past.

Their past and any problems aren’t yours to fix; they’re theirs. If a person’s solution is to reduce you so that they can remain in their comfort zone and essentially enjoy things on their terms, it’s time to know your own worth and back away.

Guest Post: Double Standards Part II
10 Things You Can Learn About Cheating from the Tiger Woods Saga
The Replacement Mentality: But WHY did they go back to their toxic ex when they could have had me?