Why your ex still reaches out periodically: intermittent reinforcement 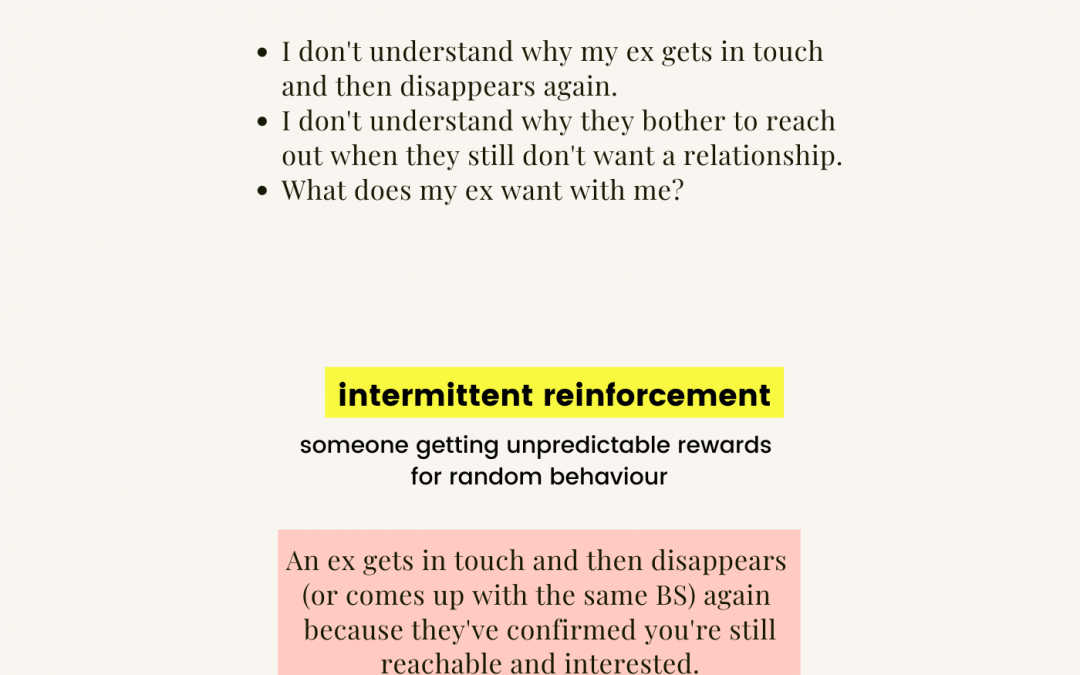 Here are just a sample of common frustrations:

There’s such a thing as intermittent reinforcement. In a nutshell, it’s someone getting unpredictable rewards for random behaviour. e.g. When I hear from people who are No Contact after a breakup and the ex still keeps attempting contact anyway and the person eventually caves, this is intermittent reinforcement. Their ex doesn’t know if they’re going to be successful on the first, fifth, twentieth or hundredth attempt, but they believe they will be eventually–and have proved it. Again and again.

Incidentally, it’s intermittent reinforcement that gets the rats all excited in those reward-seeking experiments. If they, for instance, spun the wheel and got food every time, they’d soon lose interest. It’s the randomising of when and if they get the food that makes it exciting.

An ex gets in touch and then disappears (or comes up with the same BS) again because they’ve confirmed you’re still reachable and interested.

They get nervous that they can’t reach you should they spontaneously combust into being available (or decent) or that you’ve moved on. Hell, sometimes they’ve experienced a knockback or need an ego boost and reach out for supply.

Once they’ve repeated this move at least a couple of times and you still engage, they don’t even put that much effort into it!

In some instances, just being able to get through is enough. They don’t even care what you say! And some will skedaddle into silence the moment you respond all friendly and hopeful. This is especially so when, realistically, given you barely have two beans of legitimate history to rub together, you’re eager to pick up where you didn’t really leave off.

It’s like they’re doing a driveby to make sure that they’re ‘property’ is still there. As soon as they think you think they’re sticking around, they slam their foot on the accelerator. Wait, were they here?

Of course, if you haven’t blocked them or made it clear that you’re not interested, you’re ‘partaking’ in the intermittent reinforcement.

On some level, you’re in this game of wondering if and when they’re going to reach out. Even though it might not be today, tomorrow or even soon, you kinda, sorta, definitely want them to contact you. Maybe this time when they email to blabber on about their life and give a cursory nod to expressing interest in how I am, they’ll say that they’ve made a mistake. Maybe they won’t disappear again.

The truth is, when we have a pattern of settling for less than what we need, desire and deserve while also tending to blame ourselves when things don’t work out, we feel validated by the intermittent reinforcement.

At least they haven’t moved on to someone else so maybe it wasn’t me after all.

It’s all-too-easy in these situations to focus on the fact that your ex reaches out periodically, but it means ignoring the fact that this isn’t going anywhere. The cycle starts again. It’s possible you’ve spent longer in this intermittent reinforcement cycle than you ever did together. And this isn’t because this person is The One or a reflection of your strong connection. No, this is only happening because of emotional unavailability and a pattern of unfulfillment and unhealthiness. It’s the disappointment cycle. You also inadvertently communicate that you’re not ready for a better relationship with someone else.

If you stop engaging, though, you can break the cycle and start to move forward.

I Can’t Believe They Don’t Want Me Syndrome
Relationship Advice: Should I cut contact, try out a new guy, or be alone?
The Futility of Pursuing the Last Word