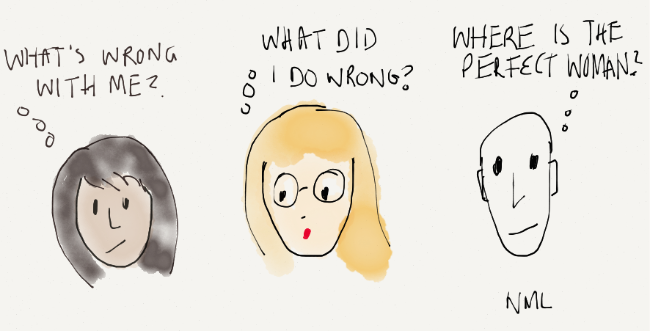 A few months back, I reunited with an old school friend and we got talking about her love life. As she recounted her experiences with a Mr Unavailable, something said to ask who he was (the ‘ole spidey senses were up) and lo and behold, it was an ex from almost nineteen years ago who I dated– and I use that term very loosely– on and off for four years, that I mention in my book, Mr Unavailable and the Fallback Girl. Charming, handsome, educated and emotionally delicate (I didn’t look for much back then), he gave good date and for a few hours, we’d share amazing chemistry… and then it would be tumbleweeds for a few weeks or even months.

My mental Roladex of associations and reasoning habits (beliefs) meant that I didn’t hesitate to to blame me for it. After initially agonising over what I could possibly have said or done to scare him off, I reached the conclusion that I always did– there was something wrong with me. A lifetime’s experience of my father flaking out and it meant that I was dazzled by the validation of being reached out to again and at the same time afraid of rocking the boat by questioning his absence. Best to be the good little girl who doesn’t make others feel uncomfortable. My inner voice would try to get me to hear, “Natalie! Would you tell this feckin’ guy to jog on?” but if he called, I answered. I wanted to win. I wanted the tension of not knowing what the hell was going on in his mind to disappear. I never called him; I was summoned. It wasn’t a booty call arrangement as sleeping together didn’t even come into the equation for a couple of years. Of course I wondered what was wrong with me about that too.

We worked around the corner from each other at weekends and I ensured that we didn’t cross paths. It was as if there couldn’t be an unexpected meeting, like when kids start school and then see one of their classmates outside of the normal setting and they act like strangers or freak out. Maybe he was a vampire as we only ever saw each other in the evening. In that funny way that the universe delivers, I only ever heard from him when I was in between relationships or at a loose end and hungry for attention and validation. I used to walk by his workplace and practically sprint past. What if he saw me and either melted into the ground in Mr Unavailable panic, or he rejected me?

Things came to their natural end when I headed off to the U.S. and then moved over to London where I continued to rack up quite an identity parade of Mr Unavailables. One weekend when I was back home in Dublin, I bumped into his friend. He had the brass nuts to chastise me for hurting him by not wanting a relationship– what the what now? A relationship had been on offer? Apparently I only wanted to date black guys. Total bullshit. That conversation never happened. I was fuming. Here was yet another guy blaming their crap on something to do with race. Amazing chemistry my arse. In that moment I could see that it had always been all about him bleating his One Time in Bandcamp tales of woe and me blowing smoke up his bottom about how amazing he was. I would have noticed this if I hadn’t been so busy living out some warped remake of when I used to be daddy’s little girl who finally got to see him. Little did I know that he actually worked around the corner from me in London for a few years and I bumped into him a few days before he was due to move back home. He tried to press The Reset Button and suggested that we meet up. Even though I was about a year away from my epiphany, I watched him turn beet red as I told him what his friend said. He denied it down to the ground, of course.

When I learned that my friend was dating him, it was one of those jump out of your seat and squeal in shock moments and yet it didn’t take long before the two of us were falling around laughing because nearly twenty years on and the same tomfoolery that was happening with me… has been going on with her. Same lines, same One Time in Band Camp, same hot and cold, same trying to spin it into it being about some random thing about her, same wrecking her head trying to figure him out. It made me shiver.

That’s the funny thing about Mr (and Miss) Unavailables: the current partner questions the hell out of themselves and wonders what the hell they’ve done to ‘change’ him/her or put them off and some of their previous partners are still beating themselves up and blaming themselves for the ambivalence they experienced.

It was a shame to hear that not much had changed. You’d like to think that people grow and you know what? Some do but some continue to lather, rinse, repeat because they lack the self-awareness and willingness to be vulnerable that would enable them to break their pattern. I don’t sit around hoping that none of my exes do better by themselves or others, because I don’t own them and they don’t own me. I don’t need or want the reassurance that they’re out there messing with someone else’s head. ‘Our’ time was a series of moments in our respective lives that doesn’t need or have to be all that we were and are. We each had our part in it.

Thankfully I figured out that I’m only responsible for my own feelings and behaviour because if I’d kept judging me on the ability of the guys I engaged with to commit, I would be in a very unavailable place right now.

What I’ve known for a very long time and what I keep trying to say in a thousand and one ways is, it’s not about me (or you).

The mistake we make is personalising someone else’s behaviour to such a great degree that we put our life on hold as a result or make destructive choices off of the back of those judgements. If they evolve, it’s really only going to be a problem for you if you haven’t.

It’s not about whether some other woman or guy is “better” than you and that they’re going to get the payout from that relationship slot machine as soon as your back is turned. It’s not because of the way you looked, or something you said, or something you did to change them and ‘make’ them go from the available person that they weren’t in the first place to the unavailable person that they actually were. It’s not because you were unable to be “perfect” all of the time. Their actions are an expression of who they are and their own struggles. Don’t spend your life looking for confirmation that they haven’t changed or that you’re “right” about their problems; your truth is your truth. If you don’t like the way you felt and you don’t like the way you were treated, that is enough.

Advice Wednesday: I'm not over my ex--Opt out of my new relationship or see how things unfold?
Reader Question: Do the sexual preferences & activities of Mr Unavailables indicate their feelings?
Did I chase or scare him away?