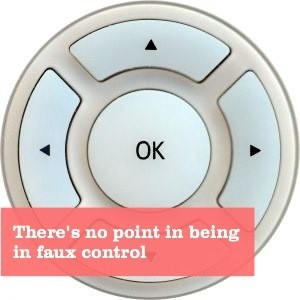 I’ve released my first companion guide to Mr Unavailable and the Fallback Girl – The Dreamer and the Fantasy Relationship – and I wanted to share an excerpt from the moving forward section as I see so many readers (fantasy relationship or not) rendered helpless by trying to control the uncontrollable, seeking perfection, and choosing ‘safe’ but unavailable and often shady relationships where they don’t have to put themselves at major risk. This excerpt is from the chapter Getting Control Under Control…

I can tell you right now, that most of the angst that people experience around unhealthy relationships is about not being able to get inside the other person’s head, to control their opinion, what they’re thinking, and what they’re intending, and the inability to influence and direct another person’s behaviour by throwing your love, attention, sex, imagination, and even texts at them. You’re not about to be able to read people’s minds or take over the controls, so it’s you that has to get a grip on trying to control the uncontrollable. The funny thing is that when you align yourself around people who have similar values and are a reflection of a healthy relationship with yourself, while you still will never know every thought in their head or be able to control their actions, you have a greater sense of trust, both in you and in them, which allows you to get on with exerting influence over your own life.

Love is not about having the power to change or control someone. It’s also not a power struggle so rather than vying to control a relationship that you feel has left you helpless, it’s better to go and be in a relationship where you can accept and respect both you and them, that you’re both copiloting.

I know it feels like everything is about you because you are you and it’s your life, but not everything is about you. The only thing that is about you is you and your actions. Everybody else’s actions are about them. You’re just not that powerful that you’re making people be and do certain things. You’re certainly not causing a radical change in personality – people be and do what they’re already inclined to do. The world is not manoeuvring to your I’m Not Good Enough Record – people are far too caught up in themselves.

Learn how to trust you.There’s no easier way to feel out of control than by placing all of your trust in others, and very little of it in yourself. You learn how to trust you by exercising your judgement through experience. This is how you learn to have confidence in yourself because you can trust you to look, listen, and act in your own best interests. It also means that even in the face of ‘bad news’, you’re OK because at least you hear and see and know it’s bad news and are acting upon it so it doesn’t become something considerably bigger and unnecessary.

When you learn how to trust you, you learn to trust your capabilities in various circumstances. I, like many, have told myself many times in the past that I couldn’t handle something and then subsequently became obsessed with being in control of ‘everything’ to prevent me from having to deal with what I was afraid of. You’re stronger than you give yourself credit for.

Perfection doesn’t exist. There’s no such thing as a perfect life or a flawless human. Trying to control ‘everything’ in an attempt to make things the way that you view as perfect, is far from ‘perfect’ behaviour. Many people spend their whole lives not appreciating themselves or their lives because of a goal of perfection. When you relax into yourself and your life and seek to feel good and happy instead of perfect, there is a whole life waiting for you to enjoy, including bouncing back when things don’t always go how you’d like.

You do not need to get all of the details of your relationship ‘right’ or look for ways to correct them through new encounters – let yourself and your experiences unfold. Let even your ‘mistakes’ unfold because you’re too busy trying to correct along the way, often using your ego as a basis for your actions, before you truly see what insights you can gain from the experiences. If you keep trying to control everything, you just don’t step back enough to have an objective view.

See the wood, instead of the trees. When you’re busy trying to control other people’s opinions or actions, or limiting yourself in limited relationships so that you don’t have to stretch you emotionally, you miss the big picture – that this relationship isn’t working for you, or that you aren’t actually getting any genuine happiness and fulfilment out of these unproductive uses for your energy, or that your life is passing you by. Is it really worth devoting weeks, months, or even years of your life trying to ‘correct’ a person’s opinion or win back a relationship that is over for good, healthy reasons?

?Pseudocontrol isn’t control; getting behind the wheel of your life and driving it is. Being in control in your head is of shag all use to you – you need to be influencing and bringing about change in your own life, through your own actions.

Look at what you’re trying to control in others – how could you create this in your own life? One example is that when you try to devote your energies to controlling the opinions of others, it’s because you are exerting little control over the opinion of yourself – you’re just letting your negative self-talk run riot. Another is when you try to control another person’s agenda and keep tabs on them because it feels like they’re off creating their own life while you’re stagnating. Stop tracking them, stop stagnating, start creating your own life. Watching over them isn’t going to do it.

Remember that when you refuse to accept that the relationship is over or attempt to coerce them into doing things your way, you’re attempting to control their agenda and possibly even bombarding them with attention. This will alienate you. Breakups are not a democratic decision and people have their own agendas, which means that they don’t need your agreement to break up and you have to step back and get on with your own agenda, without them. In a mutual relationship, you have a joint agenda. Stop wrestling with this person for power – let them go.

Practice acceptance. I don’t mean accept bullshit behaviour, but what I do mean is to accept how things are, instead of rejecting it in favour of complaining about how you want things to be like how they used to be or how you believe they should be in the future. You cannot control the past and you certainly only have control over what you choose to do in your own future.

Accept that you cannot control others but you can control you. This is natural, normal, and nothing to be ashamed of. It doesn’t mean you’re not good enough or that you’re a failure or that you should have tried harder or whatever else you’re telling yourself. There is no person on this planet that you can control other than you. When you recognise that you don’t have this power, while your first instinct may be to feel helpless, what you need to give way to, is you not blaming yourself for other people’s actions and not being able to do something that nobody other than abusers can do, which means that you can claim the power that’s rightfully yours. Trying to control others does create a feeling of helplessness but every day you have to make a choice between being helpless by trying to control others you can’t control, or being powerful by empowering you in your own life.

Nobody else should be directing or influencing your worth or your life other than you. This is the same for everyone else, so you need to get on with assuming responsibility for yourself and leave everyone else to do theirs.

Are you trying to 419 me? Use your self-esteem operating system to filter out BS & shadiness
We self-sabotage our efforts to do better by us, because we're afraid
Guest post: How to demagnetize a Drama Magnet...