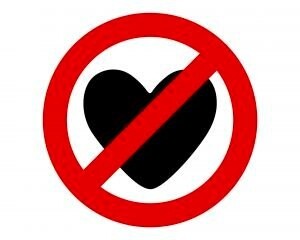 After I broke up with an assclown many moons ago, I found myself wondering about getting back with him. He was no better than he was when I was with him but I decided that the desire to be around him was so great that it must be indicative of how great our ‘love’ was – surely love would conquer all?

Fortunately common sense kicked in on that occasion because I recognised that not only was he no better, but he was actually worse. However, I am not alone in wanting a man and a relationship that’s no good for me and even though I went on to be involved with even more assclowns, one thing that stuck with me is that there is a reason why you broke up.

You can gloss it over, inflate it with your vision of the great, happy ever after, but in the cold light of day, you cannot ignore the fact that the relationship ended for a reason and if that reason still exists, even if you choose to ignore it, the relationship will fail again.

This is a key fundamental because as women who have a great capacity to expend vast amounts of emotional energy on poor relationship investments, we love to:

Have little or no boundaries.

Love for the two of you.

Project our vision of things on people or decide that they will do something because it’s what we do if we were them.

All of this means that we end up spending far too much time with men who are unworthy of us because we’re not being real about the relationship and then when it’s over, we continue to expend even more energy pining for the illusion and trying to restart the relationship.

Most of the time when I have wanted to get back with an ex, it’s for the security because there is the fear of the unknown which seems less palatable than being around someone who saps the good out of you.

Fear is often the key driver – fear of being alone, fear of starting over, fear of him being better for someone else even though he’s crap with you, fear that all men are the same so you may as well settle, fear you can’t do any better, and the list goes on…

Getting back with an ex needs to be a positive step that enables you both to go forward.

It can’t be a case of you deciding to shut out the reality of him and the relationship by choosing to ignore or gloss over the reasons why the relationship ended, because it doesn’t change the fact that not only do they still exist, but those issues still exist for him, even if he’s not prepared to acknowledge them or be accountable for his part in the relationship.

Wanting, wishing, willing for things to be exactly as you imagine them to be is not the best use of your energy. It is important for you to get real because the sooner that you get real, the sooner you can establish whether there is anything to actually go back to.

Don’t get me wrong – there are people who break up, get back together and go on to bigger and better things together, but invariably when poor relationships end, they’re supposed to, it’s just that human nature makes us resistant to change. We’re also resistant to working at things but we’re also resistant to recognising that we need a foundation to a relationship in the first place for there to be something to work on.

And this is where many of us have and will come a cropper – if you are habitually involved with emotionally unavailable men and assclowns, your relationships have little or no foundation which doesn’t give you a great place to start from when you’re considering returning.

You also need to recognise that the reasons why a relationship works for one person is not the same as the other parties reasons, particularly in a poor relationship.

The guy may be comfortable with being able to behave in a certain way – if he’s been used to being allowed to take the piss in the relationship, show up when he feels like it, call when he wants to, be taken back when he’s played away, not have his lack of contribution questioned etc, it’s a bit of a leap to think that he’ll be comfortable playing the dutiful boyfriend.

We can’t assume that because we love someone that they in turn should embrace that love and do as we expect – as I’ve said before, loving someone doesn’t create an automatic IOU.

You also need to consider that in poor relationships, often what we think is love, is drama and fear.

The big question you have to ask yourself is: what are you going back to?

When you put aside what you’d like to be going to if only he did x,y, and z in the future and look at his consistent behaviour, you need to weigh up the reality of who he is. If he’s been a jackass for 10 out of 12 months and you’re focused on the first 2 months as a basis for going back, something is rather jacked up about your optimism because he’s been an assclown for 83% of your relationship and you’re living it up on a meagre 17%.

You then need to ask yourself: have we been down this road before?

If you’ve broken up numerous times, what’s so different this time?

You think he sounds more contrite, more desperate? Has he made oodles of promises? You desperately want it to work? If you’ve broken up many a time, the likelihood is that unless something is dramatically different and he is consistently action focused (and you are too), you’re barking up the wrong tree.

Remember – the level of upset you feel after you break up doesn’t correlate with the amount of love you think you feel for him – if you have low self-esteem and a penchant for poor relationships, you hanker for the bad stuff.

Be real about what you’re going back to. If I had gone back to the assclown I mentioned at the beginning, I’d have been going back to a flaky guy who wasn’t sure from one week to the next how much of a boyfriend he wanted to be. I’d have been wondering who he’s flirting with when he’s out, waiting by the phone fannying my life away, and feeling disappointed by his failure to live up to the promise I had created for him. The real him wasn’t very attractive.

Boundaries and the messages contained in discomfort
The No Contact Rule Really Does Work Reader Success Story
Are 'False Negatives' Causing You To Make Negative Associations?
Share this...