Have The Willingness To Listen To Your Gut 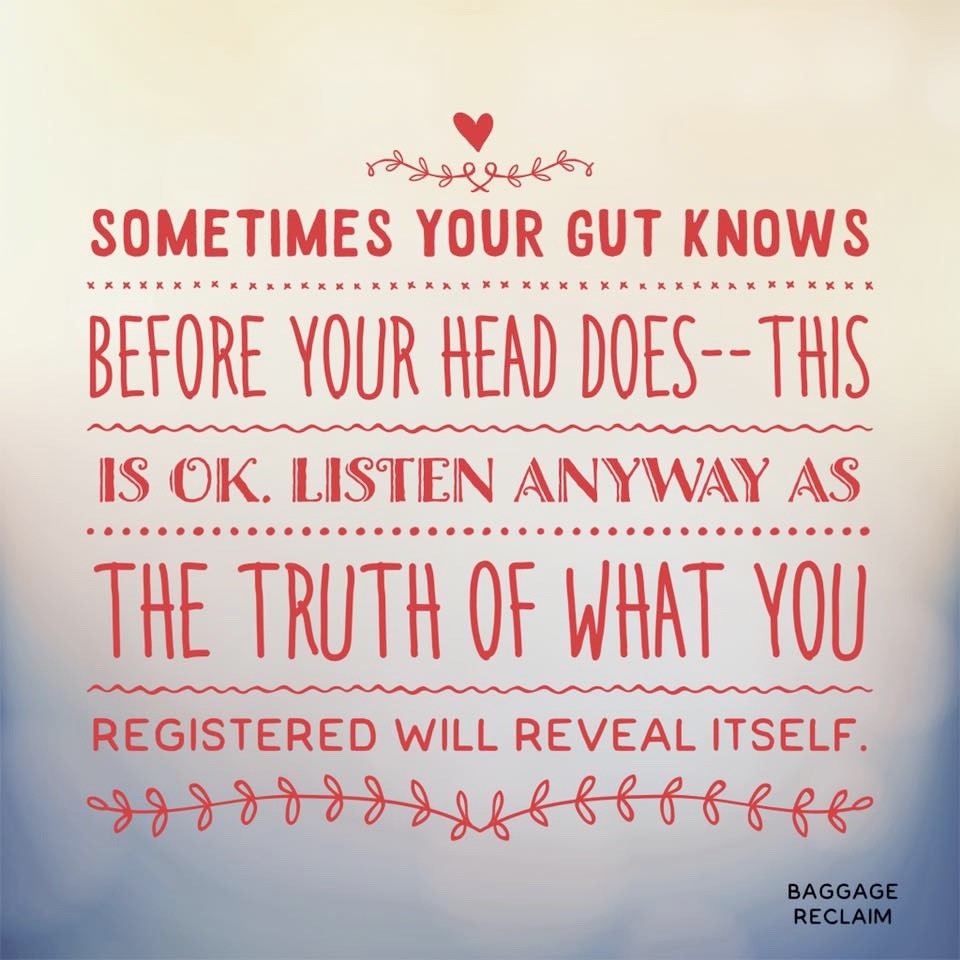 Experience has taught me through the pain of repeatedly putting my hand in the fire and living life lessons on repeat, that I don’t feel uneasy for no reason at all and that I must listen to and trust my gut. It doesn’t always mean that something ‘bad’ is happening but it is a prompt requiring me to slow down enough to listen to me, to be self-aware and to pay attention to my surroundings (the situation or person). As many of you have shared here, the less you listen, the louder or more uncomfortable it can become, or whatever you ignored comes back to bite you in the arse at a later date.

The most common example of this is with relationships – the very things that we turn a blind eye to and override due to other feelings we’re enjoying or ‘potential’, are the very things that prove to be an issue further down the line. We turn a right light green or we ignore certain things that don’t fit with our vision only to find that they form part of a larger picture and pattern of an issue. Then we beat ourselves up for not listening and if we’re too hard on ourselves and don’t actually heed the lesson from the insights gained and apply them, we actually forget to do the very thing that got us into problems in the first place – listen.

Our habits allow us to do a lot of things in our day-to-day lives without much thought, which is good in some respects because we’d be exhausted if we had to make decisions about every last thing and do everything ‘manually’. Where we run into issues is if we’re doing too many things out of habit that aren’t actually serving us and we’re operating on autopilot, defaulting to our comfort zones out of not wanting to get uncomfortable and use our judgment.

Our guts are there to wake us up. It’s our unconscious telling us to get conscious and reduce the amount of automation and coasting in our days. If you’re not listening to your gut, you’re ignoring you, and you’re ignoring reality while potentially operating in a high bullshit environment.

Your gut and your ability to decipher emotional reactions of unease or a signal to trust is learned over time. You’re most certainly not born with this skill that helps you to navigate life which is why your experiences and the type of support you’ve had in learning who you are and learning about the world are particularly important. Your willingness to listen to your gut and the ability to trust it can be compromised when your trust is breached, or when your feelings and opinions were invalidated, or you felt penalised and disapproved of if you made a mistake, or you were told or came to believe that you were worthless or “not good enough”.

Why are you going to trust something that you don’t think is of value or that you believe isn’t up to the standard that you ‘should’ be?

Instead of your gut being your friend that gives you feedback that helps you to trust the positive and recognise something of concern, the gut feelings become associated with a sense of failure, doom, or not being “good enough”. It becomes that ‘party pooper’ that recognises that the party is a bit sketchy and suggests that you leave because they can see that you’re very inebriated and on your way into trouble.

Sometimes your gut knows before your head does – this is OK. Have awareness of it along with the willingness to listen, as the truth of what you’ve registered will reveal itself.

Ignoring your gut is ignoring you and you’re worthwhile paying attention to, even if it’s to say, “It’s OK. I know you’re worried but _____________” instead of “Shut the eff up and stop ruining my life. I hate you!” It’s one thing if you have a ‘feeling’ about something, you’re not quite sure what it is, but nothing else shows itself over time to support it and you’ve been having the awareness to pay attention but, habitually ignoring important feedback and ignoring your gut about the same people and situations is also ignoring reality.

While your gut can be sending danger signals, often it’s messages like “Slow your roll and step back a little so that you can see more clearly” and “You’ve done the groundwork, I know you’re afraid but trust the information”.

Your gut doesn’t say stuff like “Hitch your wagon to that last chance saloon so that you can escape the you and the life you hate even though this person is a complete stranger”. That’s your conscious thoughts.

I had a group of people doing the usual griping about the near ‘awfulness’ of having boundaries which incidentally is like complaining about having self-respect. I told them: Boundaries aren’t a cockblocker.

Neither is your gut.

It’s a matter of practice. Check in with you regularly, especially when you’ve got “niggles”.

There’s a fear of getting things wrong but the quicker you learn to trust your gut and to learn from each decision irrespective of the outcome, is the more finely tuned your gut is. You can hardly spend thirty years ignoring your gut and then expect that every last decision you make from here till your dying day is going to be “right”. Life is a journey of on-the-job training. The information from things not working out this time contribute (if you learn from the insights gained), to helping you do better next time and at least when you do trust you, you eventually have more incidences of getting it right than you do of getting it ‘wrong’. And sometimes wrong isn’t wrong; it looks wrong now but don’t see that in the future it may very well prove to be right plus the more you trust you, it doesn’t matter about some old decision because you’re enjoying the benefit of subsequent decisions.

Which Do You Prefer - The Problem or The Solution?
Compatibility, Your Type, and Common Interests Part 4
No Contact: Why you need to keep your proverbial door closed...even when they try to break it down b...