Revisited: Are you worried about being ‘good enough’ for something you don’t want or are not even doing? 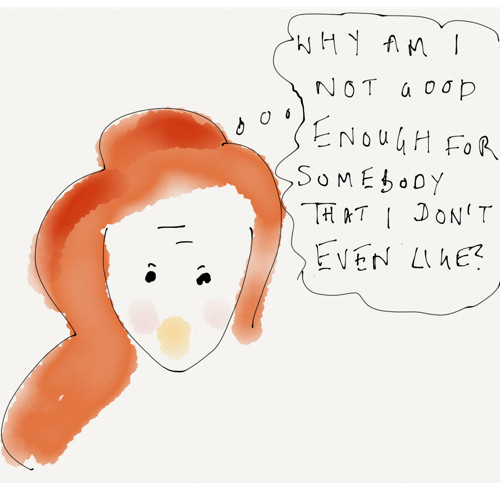 Don’t forget that I’m on a ‘break’ until September so I’ll mostly be featuring some of yours and my favourite posts from the archives.

Last night I had a well overdue catchup with one of my closest friends and as we filled one another in on our respective lives, it was both scary and hilarious how we’ve actually been going through a number of the same things. I experienced an ‘Aha Moment’ when she told me that after near running herself into the ground worrying about making some decisions about her career, a friend said to her “So let me get this right – you’re worried about not being good enough for a job that you don’t even like or want? You’ve worried about whether you’re able to do a job that you’re already doing well at?”

This is what I come across every day on Baggage Reclaim and have experienced in my own life. Concerns that sound like:

I’m trying to ‘win’ someone that I don’t actually want because we don’t share similar values and they’ve treated me without love, care, trust, and respect, but if I don’t make them love me, change, and basically win them, it will mean I’m not good enough.

I’m losing my mind over the fact that someone who was unavailable when I met them because they’re attached is still, yep you guessed it attached. In fact, if I’m entirely honest, I’m agonising over why they haven’t left them yet and why they don’t want me…even though I don’t trust them.

I’m worried that I’m not able for a relationship that is actually working well and healthy because I’m used to being in relationships that have issues I need to fight for.

I’m worried that I’m not good enough for a relationship that I ended for valid reasons and that I don’t even want anymore.

I’m worried about why I’m not good enough to have a better relationship even though I’ve never put myself out of my comfort zone and have stuck with my type.

In fact, I’m worried I’m not good enough for a relationship and I’m not even leaving my house and meeting people.

I’m worried that I’m not good enough for someone I claim is a narcissist. I combed the internet, everything says run Forrest run, but I’m wondering why they couldn’t make me the exception, even though they’re dangerous.

I’m worried that I’m not being and doing enough in spite of the fact that people keep saying to me that they don’t know how I do it, that I’m brilliant etc.

I’m worried about whether I’ll ever love again even though I’ve decided that I’ll never risk loving again and don’t trust anyone.

I’m worried about why someone at work/school/the gym/whatever doesn’t like/talk to me even though I don’t like or actually want to talk to them.

I can’t believe they didn’t invite me to something that I didn’t want to go to. Oh and did I mention that I don’t even like these people?

I’m worried that I’m not good enough at my job even though I’ve been promoted several times, have been headhunted, offered different jobs, am regarded as an authority in my field etc.

Who needs to change here?

When you lose your way, you get caught up in inverted ego issues where you make everything about you, including Other People’s Behaviour, take responsibility for everything (blaming and shaming) or avoid it all together (denial), or become obsessed with being ‘right’, having the last word, and fighting for something that is working against you and that you don’t actually want.

Think about it. If you’re not living the relationship you want or the person isn’t behaving in ways that are conducive to a healthy, mutual relationship, why do you want them?

This is how you get distracted from your values, your purpose, and basically yourself.

It’s important to stop focusing on not being good enough and look specifically at what you’re concerned you’re not good enough about because by putting yourself at conflict with you, you’re undermining everything you’re supposed to represent, desire, and need because you’re not listening and acting in line with your values so that you can do start to do what will actually make you happy, feel good, etc.

When you worry about something that’s in direct conflict with what you profess to want or be, it’s a sign that you’ve stopped listening to yourself and are not being authentic. It’s also a sign of avoidance – how can you be so concerned with something that you don’t want when the issue of what you do want hasn’t been addressed?

In recognising this shortfall in reality, you have an opportunity to address an area of your life that will have you failing to match your actions and words, which can wreak havoc in your life. If you’ve ever been a Fallback Girl (or guy), this is something you’re also on the receiving end of – the person concerns themselves with winning you over at all costs (blowing hot, Future Faking, Fast Forwarding etc) and worries about why you don’t want them or are ‘resisting’…even though they know even though they may not admit it, that they don’t want a relationship or will find a reason to ‘abscond’ or create problems at a later date. You then as the Fallback, end up dragging out this situation if you start ‘fighting’ for the relationship in spite of how you’re being treated.

Conversely, I get so many people saying that these depleting relationships are what they want and that this person is the only person that will do – but then we have to ask ourselves how can we complain so much and be upset about something and someone so great? The two things don’t match!

What are you worried about? What are you worried that you’re not good enough for? Write them down and be a little descriptive. If you read it out loud or you even said it to someone else, would it sound like you’d been at the crack pipe? Does it sound confusing? Conflicted? Irrational? Bearing in mind how much of your life can be devoted to worrying about these things and avoiding making and sticking to a decision, it’s a long time to spend in confusion, conflict, irrationality or even an emotional crack den, which is stressful which has repercussions elsewhere in your life.

Many of us worry about being ‘perfect’ which doesn’t exist. We think we’re seeking to be ‘good enough’ but when we keep flogging ourselves about not measuring up, it means we’re actually not even recognising when we’re more than good enough. The person who embraces themselves and doesn’t strive for ideals that don’t exist and is self-forgiving and looking for growth in a positive way, ends up being far happier than the person obsessed with being the ‘perfect version of good enough’, blaming themselves for everything (because they’re all or nothing) and focusing negatively on themselves.

The People-Pleasing Diet: Why you've got to give up trying to please The Unpleasables
Podcast Ep. 128: Roles - "I Want To Break Free"
Translated: I Love You But I'm Not In Love With You...and other such sayings