The tension relief of procrastination 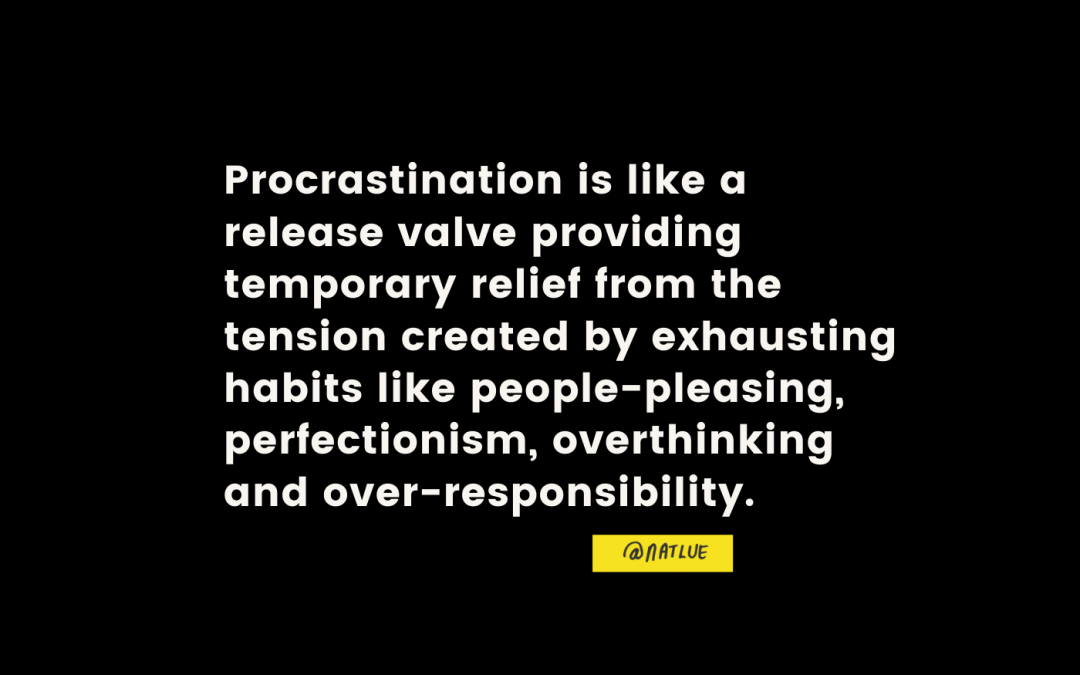 There’s this common misconception that we humans put things off, delay, become overwhelmed or are indecisive because we are lazy. Social conditioning taught us that everything is a matter of whether we are ‘enough’–worthy enough, trying hard enough, good enough. We’ve then internalised this narrative as our own self-criticism.

In reality, procrastination is a learned response to uncomfortable feelings and thoughts triggered by our or other people’s expectations.

Now, of course, some humans are ‘lazy’. And even then, it’s a learned response. There’s baggage behind it that likely fits around a role they adopted earlier in life. The laziness serves an identity.

Distinguishing laziness from procrastination, though, helps us see that laziness isn’t our flaw.

Many procrastinators, however, get a helluva lot done, just not all the things they think they’re supposed to have. Which might be too much anyway. Or, they procrastinate in the area(s) where taking action would move the needle towards something that even if they want it, they’re afraid of it, too. Their identity doesn’t match what they want and they fear the consequences. What if I’m not worthy enough? What if I’m not ready? Jaysus, what if I eff it up in 2050? What if people don’t like me anymore? What if I can’t handle the success? Who am I to do this? Mom/dad will expect too much of me or think they got away with [the past].

When we say that we want or need something and yet we also make choices that are contrary to that or certainly delaying it, we’re hiding out.

We’re hiding from our potential or purpose, or delaying taking the next step or moving on to the next stage of our life.

And because of our perfectionist, people-pleaser and overthinker ways, we do things, not because we want or even need to do them but because it’s what we think is expected. This means that some of what we believe we want is based on programming and other people’s expectations, not desire.

If we’re secretly or unconsciously afraid of the consequences of being or doing something that will lead to something that we don’t truly want, then, yeah, we’re going to procrastinate. For instance, relationships with emotionally unavailable people are a form of procrastination. Whether’s it’s feeling unworthy of a loving relationship or fear of the past happening again, it’s still fear.

People-pleasing, perfectionism, overgiving, overthinking, being over-responsible–these are all bloody exhausting. They suck the frickin joy out of things! They create resistance because it’s impossible to keep up with these habits and also meet our emotional needs. We can’t feel good about ourselves.

Despite ignoring our boundaries and bandwidth, possibly because we have no concept of them, procrastination is the coping and survival mechanism we adopted much earlier in life to manage those uncomfortable feelings.

Procrastination, then, is like a release valve providing temporary relief from the exhausting habits. Whether we’re aware of it or not, and whether we’re conscious of how and when it specifically manifests in our life, it’s basically tension relief. It’s a self-protective strategy that’s become maladaptive in adulthood because we use it even when it doesn’t apply to a situation, such as when we really want to make, do, be or have something.

We’re not that kid any more. Becoming more aware of where we inadvertently (and sometimes consciously) self-sabotage helps us to find healthier ways of responding to tension.