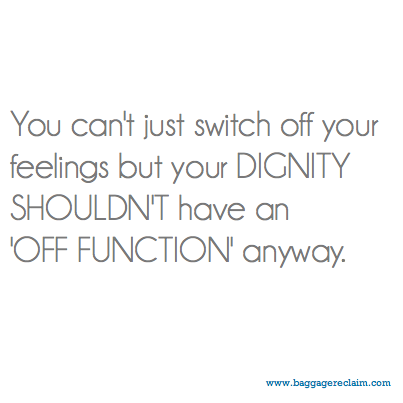 When you’re in the throes of the torment from a breakup, it’s understandable to want to reach out and let the other party know exactly how you feel. It might be because you hope that it will inspire their own desire to return to the relationship, or maybe it’s because you want them to know how much you’re suffering in the hope that they too will feel bad or that they’ll at least have the decency to back off if they’re saying or doing things that are contributing to your pain. The trouble is that in the wrong hands, what you’re sharing with them can be a big, fat, ego stroke.

Particularly when it’s someone who has shown themselves to be emotionally unavailable or has crossed into the territory of lacking empathy and even taking advantage of /abusing you, he/she knowing how much pain you’re in or you making repeated overtures can be as good as the feeling of ‘having’ you in a relationship.

Knowing that you’re in pain and/or that you’re there as an option in their back pocket if they should need to avail of you on a rainy day is like a low calorie ego stroke and certification of your feelings and their ‘option rights’ without them having to put in too much effort.

They know you’re not going anywhere and that’s actually a pretty secure feeling for someone who always likes to have a proverbial bird in the hand and one in the bush. Of course knowing that someone is ‘there’ when them consistently being there and being expected to be emotionally, physically and spiritually available is quite a ‘challenge’ means that their desire and sense of being out of control won’t exist. If the relationship wasn’t working or had never really gotten off the ground, you as an option that they get to remind themselves of can start to seem more attractive than having to stump up a relationship.

Now aside from the fact that you may be giving them even more of an ego stroke than they deserve, there comes a point when you’ve got to roll it back…. waaaaaaaay back, because not only is doing the same thing and expecting different results, insanity and another go-round on the disappointment cycle, but not knowing your own line will cause you immense pain and cost you your dignity.

I know that you can’t just switch off your feelings but your dignity shouldn’t have an ‘off function’ anyway.

Why give someone the comfort of knowing your whole life is falling apart because you’re not together? Not only are they just not that special, but you no longer being together is the sign of the relationship being broken, not a sign of you being broken as a person. You’re not going to feel too happy when they seem to be getting on with their lives and you’re there letting them know that you’ve stopped functioning without them. All this does is open you up to further rejection because the reality is, the type of person who is content with knowing that you’re there as an option, is also the type of person who either won’t find it attractive that you seem dependent on them and will distance themselves or they’ll exploit your feelings.

You’ve got to know the line and you’ve got to know when to fold. Others know the line when you know the line and sometimes you have to back away even when your ego wants you to race in there and do things to get attention and validation or to avoid uncomfortable feelings. There’s a thin line between repeated declarations of love/pain to someone who you’re no longer with or who isn’t treating you with love, care, trust and respect, and desperation. You can say your piece once, twice at a push and then you have to muster every shred of dignity you have left and put one foot in front of the other and walk away.

It’s tough but to be honest, walking away ends up being a piece of cake in comparison to clinging on and then facing everything that you’ve said and done in the process of trying to get them to ‘see’. When you do begin to come to terms with the loss of this person from your life and face your feelings, if you’re feeling low and vulnerable, you’re likely to end up giving you a hard time for chasing after him/her, which will just give you more to ruminate and stew in blame and shame over. In wanting this person to share in your feelings, to ease the pain or to even be inspired to spontaneously combust into a better person or to revert to what you thought that they were, you can end up doing the equivalent of running through several or even multiple red signals that should be alerting you that this is a code red, loss of dignity, unhealthy situation. The more you do, the more you may think that you should just go for bust, after all you’ve come this far and ‘lost’ everything.

It’s never too late to pull back. It doesn’t matter when your dignity kicks in; it just matters that it does at some point. I remember when I was going through No Contact how one day it occurred to me that I didn’t want him to have the security of me always being in the background – what the hell would that have said about me? It was an incentive for me to shut my mouth after the many times I’d thrown my feelings at him.

You can feel all of your feelings and grieve the loss of the relationship and also play your emotional cards a little closer to your chest in terms of letting this person know all of your emotional business, which under the circumstances may be a bit like giving them the blueprints to screw you over further. Love doesn’t look and feel like something where you have no self-esteem left because you lost it in the process of chasing after them. If loving them means that you cannot treat you with love, care, trust, and respect, always with no equivocations choose you.

You can also listen to this post on Soundcloud.

Advice: Why her and not me? The Other Woman gone very wrong
Reflections: Knowing Your Own Approval
About Voting for the Relationship You Want