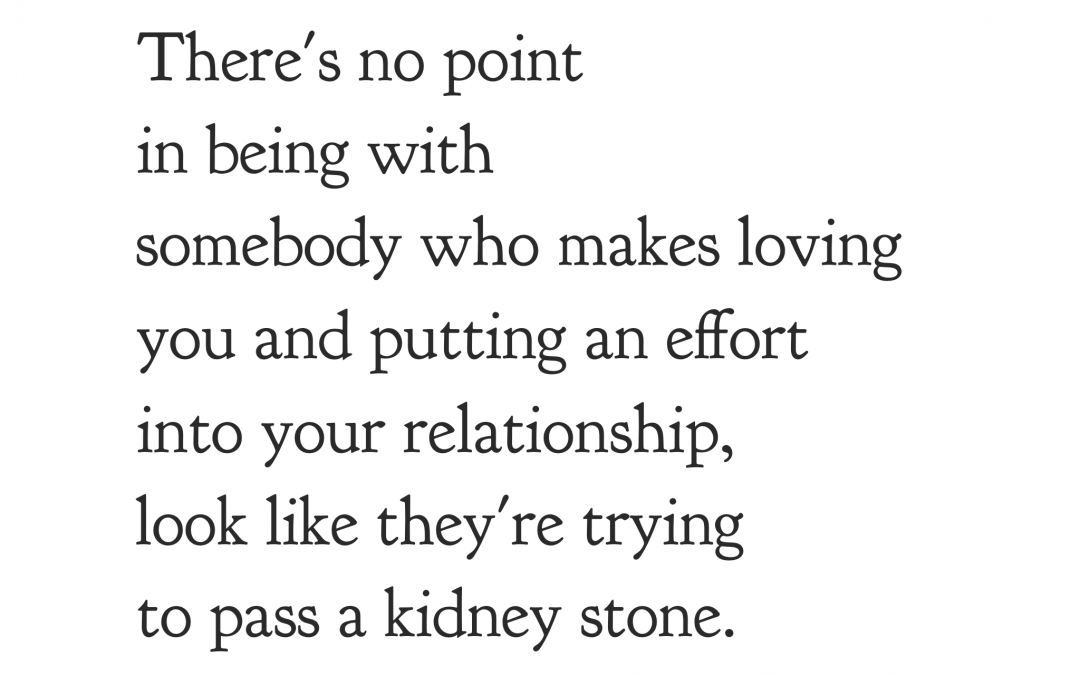 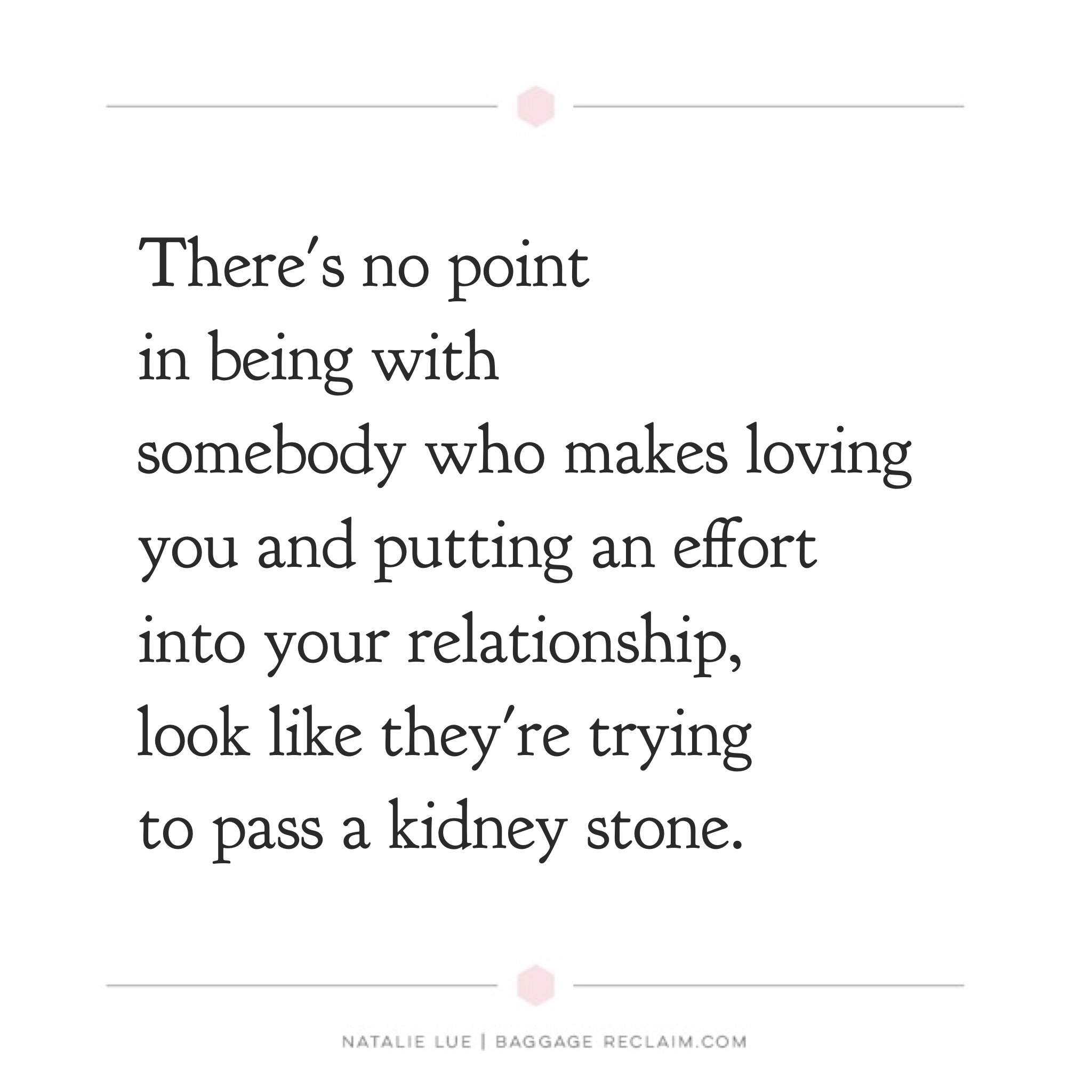 “I’ve been reading your blog and I think I was just in a yo-yo relationship with an emotionally unavailable man.

We have been on and off for the past 2.5 years – he broke up with me twice (once because he didn’t feel like he could give me enough and the second time, he didn’t feel like we were ‘connecting’). He came back to me, told me he still loved me, that he realised things – that our problems were all him and that he didn’t want to be with anyone else.

This third time around, he didn’t come out with the L-word. He had said his friend commented that “people like us tend to get married” (Nat’s Note: this is Future Faking and Fast-Forwarding) and said, “That doesn’t freak you out, does it?” I said of course not.

The other times we were together, we’d see each other during the week, but now, we weren’t at all. I was too scared of being thought of as “clingy” so I wouldn’t push the issue.

We saw each other on weekends and maybe one weekday, when he brought it up. He lives 2 minutes from me, yet he would never pick me up when we would go to hang out with friends (i.e: the bar, parties). I eventually asked him about it, and he said it was a “hassle” to park the car, get out to come to my door, get back in the car etc. The week after that conversation, he started suggesting picking me up, so I had thought he realized how callous that sounded.

Six months later, he still hadn’t said he loved me (when he did in our previous relationship-spurts), and he was spending most of his time with his roommates playing video games. After a Friday night at the bar with our friends, we’d go back to his place and hang out with everybody – I’d get tired eventually, and want to go to bed… but he’d still stay up. It made me feel like he’d rather spend time with these guys he lives with and sees every day, than me, his girlfriend whom he only sees on weekends.

This past week, he texted me to make plans to come over to my place on a Tuesday. Then, he asked if I was happy with our relationship. I said I wasn’t (cause I’m an idiot) and he said he wanted to make sure I was OK with his stance on relationships. I had no idea what he was talking about so he texted me the following: “I don’t like ‘I Love Yous’, I will not be having kids, I don’t want marriage, I don’t want to live with a significant other, nor see them every day.”

He said we had talked about this before, but all he’s ever said is he’s not ready for marriage or moving in together – and neither am I. We both don’t think we want to have kids either. I asked why the hell he was with me then, and he said it’s because he loves being with me.

I broke up with him right there and then– remember that this entire conversation was all over text message. Now, he’s extremely pissed at me for doing it that way, and I feel bad about it, but I didn’t know what else to do! The conversation got to a point of no return. He says there’s nothing more to talk about, he can’t look at me the same way anymore and what I did changed his entire perception of me.

I don’t think I did anything wrong, but I feel so terrible. When I cooled off, I asked him (texted) why he felt the way he does about relationships, but all he says is that we should have had that conversation before I dumped him.

Everyone tells me I made the right decision, but I can’t help feeling like a bad person. I also don’t understand how he could go from that wonderful person he was – telling me he loves me, talking about moving in together/giving me a key to his apt, how we’ll probably get married cause we keep coming back together – and now he’s this cold being…?”

Natalie says: Oh dear… you’ve been jacked by a Mr Unavailable and as usual he’s turned the tables so that you end up feeling bad about telling his fickle, inconsistent, using, inconsiderate, narcissistic, self to get lost.

The first thing I ask you to do is forget the marriage comment. It doesn’t actually mean anything particularly in light of his latter comments.

He didn’t say that he wants to get married and in fact, insists that he won’t.

What you have fallen victim to is a random comment from a friend who doesn’t recognise how damaging and dysfunctional your relationship with him is.

Life is not a romcom. If it were the case, then you could both mess each other around, behave as badly as you want, and then in the last ten minutes, suddenly realise that you’re both who the other should be with and live happily ever after. That is what that person’s comment is based on.

Here is the reality: your ex likes you but doesn’t like you enough.

Your ex is lazy, commitment resistant, more concerned with hanging with his buddies, but he’s been passing time with you, treating you as a Yo-Yo Girl that he can rely on to be there to massage his ego and give him the pretence that he’s a great catch.

This guy is so flipping lazy that he can’t even bring himself to pick you up!

It’s the little things as well as the big things and Mr Unavailables make things that are natural to normal, available men seem like the sky is falling down.

Mr Unavailables always have other things going on.

Hanging with their friends is of pivotal importance and it is only when they all leave him hanging to go and commit to their girlfriends/wives, have babies etc., that he might have a sudden panic and think, I wonder if I should find some poor unsuspecting woman to put up with me till I have my next panic and decide I want to be on my own.

You have your own issues.

You don’t want to commit either. It’s your prerogative to say you’re not ready for marriage and that you don’t want kids, but surely you can see that you are his dysfunctional co-partner?

The one thing you say you don’t want is the one thing that you bought up a few times in your email.

But you’re afraid of commitment too and the biggest sign of this is that you’ve been prepared to be involved with him for all of this time as he boomerangs in and out of your life, giving you less and less each time he comes back. Where is the sense in that?

In many respects, 2.5 years may have gone by, but you are still dining off old comments and things that he did way back when, even though he has not been like the ‘old’ him.

That’s what he pretends to be and you are clinging to glimpses of his old behaviour when in actual fact the ‘real’ him is the one that you get for the majority of the time. What is so wonderful about a man who treats you like this?

You say that you didn’t want to be ‘clingy’ but you did that in response to being made to feel that you were needy because he was struggling with the relationship.

Now you’ve convinced yourself that if you’re involved with him, you can’t want more than he’s offering, but you do.

This texting bullshit is the scourge of relationships and the saviour of a man who doesn’t want to have confrontation or expend any emotion. Who the hell communicates that stuff over text? Yes you did end it with him by text (which isn’t very nice) but that was his chosen method of communicating with you. What did he expect? What conversation do you guys need to have?

Your guy has communicated his position. He has told you what he doesn’t want and that doesn’t really leave you with very much.

What are you fighting for?

What do you need to discuss?

At this point, you need to take the information, process it, recognise it for what it is, and walk away.

Instead of focusing on why he is being like this, you need to focus on why you’re still there when he is blatantly wasting your time.

Address your own issues about love and commitment and figure out what you really want so that you don’t end up hanging on this guy’s coat tails as he manages your expectations down to none and you pretend that you’re OK with it.

He has told you his stance and how he really feels and he needs a very understanding booty call girl. Is that you?

From The Other Woman to Happiness
Open-Ended Relationships: When You Think You'll Get Back Together
Advice Wednesday: He's separated, we've been together for 2 years but he's super-busy. Help!