If None of Their Exes Had A Problem With It, Where Are They Now? 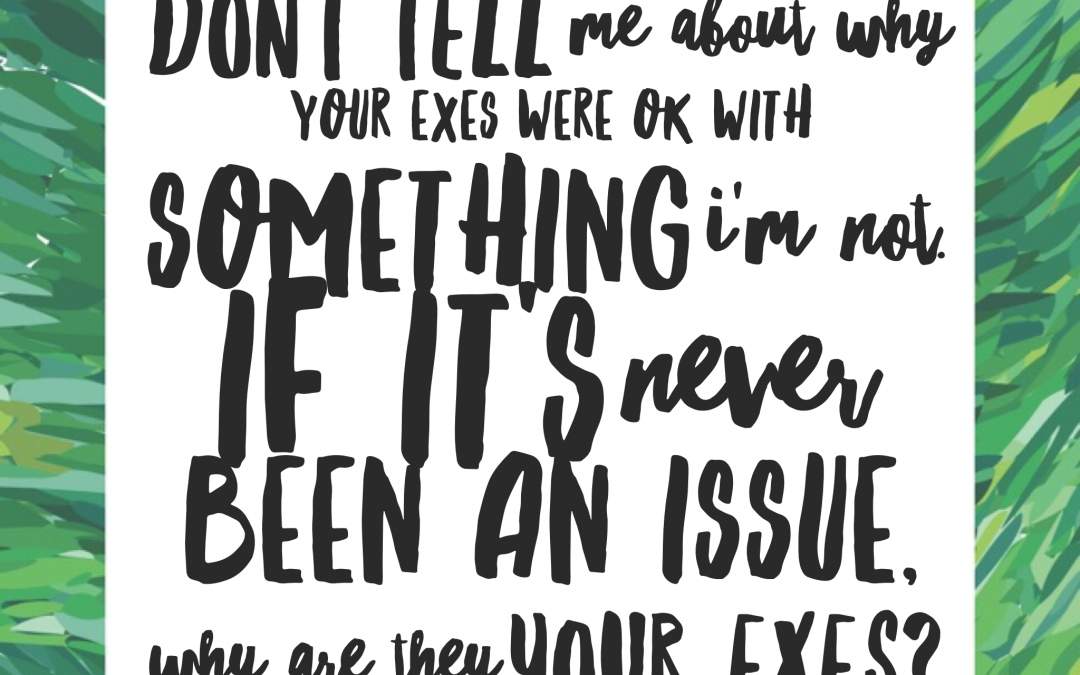 In pretty much all of my previous relationships, there was that all too common hallmark ‘discussion’ of an unhealthy partnering. I’d flag my discomfort or unhappiness about something and they’d say “None of my previous girlfriends had a problem with this”. And they would often add something about how these exes had all found [the problem] totally ‘normal’.

Now keep in mind that this could be anything from disappearing, flirting with my friends, to a sexual act that I didn’t want to do. It was bad/selfish sex (the jackhammer almost-need-a-neck-brace-afterwards type or the one who you could effectively leave a blow-up version of you and they wouldn’t notice the difference). It was avoiding sex/affection altogether and getting wasted and aggressive. Some might wonder how I ever second-guessed myself and contemplated (and sometimes did) sidelining my own needs, expectations, desires, feelings and opinions.

You are not on the same page with somebody, if when you raise something, they dismiss it by either comparing you to people who they are no longer going out with, or they call you ‘too sensitive/needy/dramatic/prudish’ or a ‘psycho‘.

They might even stretch themselves to making a low jab about how you taking issue with it is why you had problems with your exes.

If you have any people-pleasing inclinations whatsoever, are fearful of being on your own or abandoned, struggle to know where you end and others begin, and/or struggle to know, express and live in line with your values even when they differ to someone else’s, you are going to backtrack. You will self-doubt and normalise what might be very unfair, unreasonable, or downright uncaring and abusive behaviour.

If you are involved with someone and something feels a little off to you about something, or you have a concern, and their response is to throw out the None of My Exes Had A Problem With This defence, they are someone who doesn’t want to recognise your position. They don’t want to see themselves too clearly either.

They are hiding out, and odds are that they gravitate to partners who they have on some level picked up are malleable.

Here’s what not enough people ask themselves in this situation: If all of their exes were oh-so-okay with something, where are they now?

What’s often missed is that the person is admitting that the issue they’ve denied was present in all/most of their previous relationships.

Why would you want to be in the same relationship that they’ve had with their ex?

It’s as if they’re reluctant to grow and be truly available to your current relationship. It’s one thing if they use the defence once but gradually acknowledge the issue and address. However, it’s another altogether if they continue to use this defence or show a general attitude of being closed to discussion and acknowledging your needs. Hard as it might be to digest, they’re also gaslighting you and dismissing your concerns. This isn’t exactly the behaviour of someone who genuinely desires to be a loving partner now and in the future.

Before you dismiss your concerns and needs, it’s important to consider why you need the benchmark of how your partner’s exes handled him/her or what they were okay with. After all, you’re not those people and there’s no actual evidence to support their defence.

Doubting yourself in this situation is a sign that you’re afraid of having, expressing and in fact advocating for your needs. There’s doubt about your right to have needs and your worthiness. You might have a close association between having needs and abandonment. As a result, you might be tempted to normalise issue to attain your greater desire of being in a relationship and avoid your fear, for instance, of having to start over.

The None of My Exes Had A Problem With This defence is a major cue that as part of the natural unfolding process in a relationship, you step up with your due diligence before making any commitments with this person.

One of the four qualities in a loving partner (along with positive outlook, ownership, commitment to self) is being emotionally available. People who are, not only know, share and express their feelings but they also have a good awareness and understanding of why their previous relationships ended. They have grown emotionally as opposed to showing up to each relationship with the same baggage and habits and calling it someone else’s problem.

What you have to consider, is what type of relationship you will be accepting? After all, if you’re dismissing your own needs and concerns now, what will that open you up to in the future?

Imagine the issue as it stands right now. Imagine the fears, doubt, blame, shame, insecurity and other emotions you’ve experienced as you’ve tried to accept the issue at your expense. And then imagine that you’re still thinking, feeling and acting this way in several months. Now try a year, a few years, a decade. Would you be happy with this?

Also, imagine approaching your partner in the future about another concern. Would you be willing to approach them despite their dismissal of other concerns? Or would their attitude make you reluctant and afraid to raise it?

It’s important to open up your perspective so that you don’t sell yourself short. This experience is also an opening to considering whether past experiences of not having your needs met are influencing your current response. If so, you can then make a conscious effort to distinguish between the past and the present. You can also use that compassionate investigation to identify the support you need in healing that aspect of your past.

Famous Mr Unavailables and Fallback Girls: John Mayer
Dating: He hasn't made a move - What the..He's gone back to his ex. Lessons on how to avoid being an...
There's Something About Mr Unavailable - The Emotionally Unavailable Man