No One Wants To Get Left Behind or Passed Over 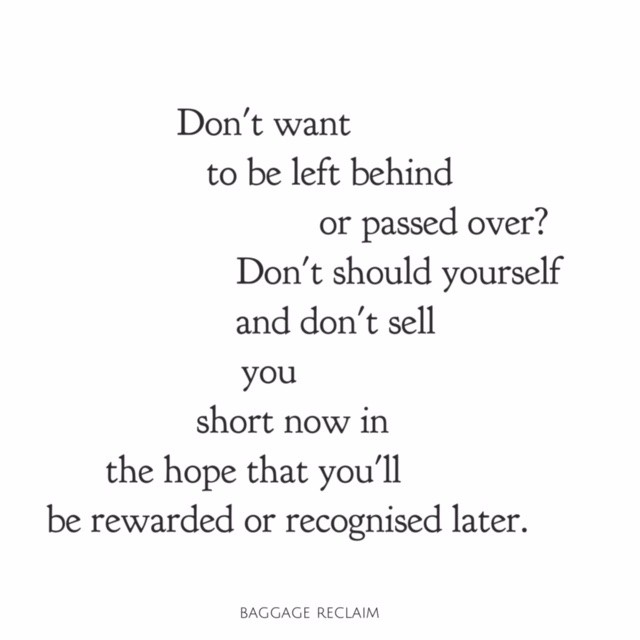 Our romantic relationships and life in general imitate what occurs in the workplace. People are at various levels and have all started at different times and with different experiences and perspective. Each worker has their own idea of what they bring to the table and what, when, why and how they feel they should be noticed, promoted, or rewarded.

There’s someone who ‘punches their card’. They’re not exactly setting the world alight but they’ve got coasting down to a fine art. While some do it out of laziness, for many it’s about lack of self-confidence and a protective measure. They’ll settle if it means that they can remain in their comfort zone, even if it’s uncomfortable. Despite feeling frustrated or miserable, they’ll reason that at least they’re not thinking or feeling too much.

Someone else does too much (including other people’s work and overdoing it on briefs and instructions). They want to be liked. They also fear saying no and lack self-belief. It’s as if they have to do extra to prove that they’re not a fraud. They invariably feel under-appreciated and taken advantage of.

Someone follows “the rules” to the letter even when it hurts. It’s their internal rules, their sense of fairness and how they think things ‘should’ be done. When they think about raising ideas, they worry about sounding “rude” or “demanding”. They water their communication down to minimise risk which effectively minimises what they convey. Even if their career progresses, some feel left behind or passed over by people who didn’t do things the ‘right’ way. It’s also very possible that they don’t love or even like their job or chosen career. In truth, they feel unfulfilled but don’t feel as if they can or should do something else. They quickly remind themselves of security or dangers when they contemplate change.

Someone else is vocal and not too concerned with being popular or even liked. They innovate and will push ideas even if they’re not viable and are willing to stick their head above the parapet, voicing concerns, giving feedback, and willing to network.

There’s also likely to be a passive aggressive and/or aggressive that wears down people’s nerves (and possibly makes someone’s life a misery). They get away with it (for now). They’re charming, they don’t get called on it, there’s a lack of leadership, or they know the right people.

Our romantic relationships and life in general imitate what occurs in the workplace. Those of us who coast, who give and do without boundaries, and who squeeze ourselves into boxes with our “shoulds” and “should nots”, end up feeling unfulfilled (and confused as to why). It results in comparison and resenting the unfairness of it all.

Outdated and inaccurate rules block us from being or doing more.

We must know “our place” even if that place is discomfort or habitual pain.

If our internal rule is that we should sacrifice ourselves for love and abscond on our boundaries, it seems damn unfair that despite our suffering, that not only would that person fail to change but that they’d leave and bounce off to other relationships seemingly unscathed compared to us.

Whoa! Hold up a second here! I’ve kept my mouth shut, extinguished my needs, tried to be drama-free and ever-accommodating and now I’ve been ‘replaced’ by [the next person]? Why do they get to be happy?

We don’t actually know that they’re happier but we do know that they don’t give a beep about the same things that keep us clamped to rules.

What is any rule we’ve ever been taught based upon? Fear and guilt. They make us afraid so that we don’t break that rule and suffer consequences. And they make us compliant by pushing guilt like crack.

Rules and vows are based on the past. There was no regard for future situations and outcomes.

Originating in our childhood, we treat a rule as if it’s definitive and then wonder why people don’t follow them. It perplexes us when they don’t provide us with similar outcomes to our past or meet our predictions. This is especially the case when the people in question are similar to who we originally made the rule to protect ourselves from (or to appease).

As I explained in my last podcast, we are not living in a meritocracy environment.

We’re not still at home or school. There’s no brownie points, stickers, stripes, pats on the back etc. Rules are invariably about appeasing one person (or a group) and their view of things, just like criticism is just one person’s view on how they like things done. Our rules are not the l.a.w or the universal view.

This is not a paint-by-numbers existence.

Sure, it’d be nice if the world played fair but that’s not the world we live in. Playing ‘fair’ isn’t about catering to our own unaddressed fears and misplaced guilt.

It’s too much to expect others to be fair when we’re not being fair to us in the first place and are persistently holding us back.

A rule based on fear and guilt to help us avoid something that we encountered with others won’t work for everyone else or even similar people.

Continuing to blame our disappointment on our worthiness keeps us further away from the freedom of an adjusted perspective and better relationships and experiences.

While we’re still viewing things with the same perspective and so remaining hurt, life moves on. We feel passed over and left behind. This does not have to continue  if we accept that the rules aren’t rules.

Our faux rules only offer temporary relief. No matter how we follow rules, the fear they disguise remains.

If anything, the fear (and guilt) is only going to recede and our perspective become more honest and compassionate if we break the rules.

When we follow who we are instead, we enjoy life from an authentic place instead of feeling rejected because people aren’t responding to the masked version of us.

We’re not in the past anymore, or at least we won’t be if we become conscious about repeating patterns. We can forgive ourselves for the past so that we can let go of the faux rules that harm us.

When we do, we notice, promote and reward ourselves, and we also show up for the things that we profess to need, desire and expect.

If we don’t want to be left behind or passed over, we mustn’t leave ourselves behind in the past. We must not pass us over.

There’s a Big Difference Between Interest and Commitment
We Have To Allow Our Friendships To Evolve
It Doesn't Have To Be So Scary In a New Relationship
Share this...