Sitting On The Fence: The Position You Adopt When You Fear Making Mistakes By Committing To Decisions 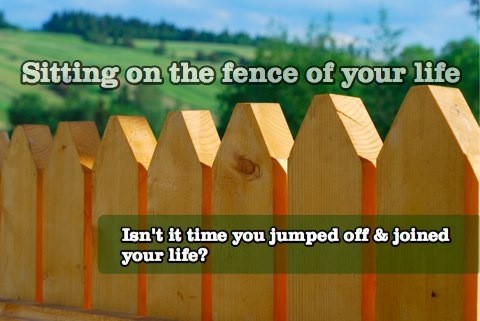 When you have issues with commitment of any kind, there is this perennial fear that if you make the decision that you’ll get it ‘wrong’ and then it’s like a black mark on your ‘life resume’ or it can’t be undone or managed, and your whole life will go down the tube off the back of it.

Ever been involved with a flip flapping Mr / Miss Unavailable that can’t commit to being with you but won’t commit to leaving you the hell alone? Their behaviour probably drives you crazy and even causes you to question yourself, but it’s important to recognise that the reason why they won’t make and stick to the decision, is that they fear that they may make a mistake and you’ll get snapped up by a better person who will put you in a better relationship, and then they’ll be kicking themselves for not realising your value. If they don’t commit and persist in keeping their foot in your life, messing with your head and essentially keeping you in their back pocket and unavailable for an available relationship with someone else, then they can actually assure themselves that they haven’t made a mistake, because if they had, in their mind you wouldn’t be there. A-ha…

This is a fundamental motivation for avoiding making decisions – it gives the mistaken impression that you have a mistake free life. This of course, is an illusion because not making decisions is actually a mistake in itself plus the effects of decision avoidance are reflected in the results of your life.

And here’s the interesting thing: It is really, frickin’ annoying when someone won’t commit and won’t make and stick to a decision, even if it’s an outcome that we won’t like, but, have you noticed something that’s very wrong with this picture?

Every person who is impacted by someone who sits on the fence, won’t commit, and who basically fannies around, is also sitting on the fence themselves.

It’s the age old thing of us often complaining about things that we’re guilty of – being mad at someone for not making a decision that we could have made ourselves, but choosing not to because we hoped that if we gave them bonus time, that they’d make it easy for us and do what we want. Even when they’ve made half-arsed decisions or even bitten the bullet and put themselves behind a decision, if it’s not the outcome we want, we go back to sitting on the fence in denial and steeped in rejection.

The thing is, handy as it might be, we (and they) cannot sit on the fence in our lives, collecting up people and delaying opportunities to stave off the possibility of a mistake they (and we) can’t handle or ‘failure’.

“Oh sorry. I don’t do mistakes so I know you’d love to know where we stand and be spared from my dipping in and out of your life and your bed for months or even years on end, but that’s just not a decision I can make. What if I become available or decide to change and then you’re not around anymore? What if I have regrets?”

We also cannot sit on the fence in the hope of tipping the other person off the fence or weighing them down with our presence in the hope of getting them to do things on our terms. We definitely cannot expect to have iron clad guarantees, especially because we’re not exactly running around providing them ourselves.

There are very few things you can have an absolute guarantee on – even products tend to come with a limited warranty that expires after a period and is subject to certain conditions. If we could all be guaranteed that whatever decision we make is right, none of us would have to use our brains – we’d just pluck a decision out of our bum and see what unfolds.

Part of being a mature, responsible, accountable grown-up involves making decisions, and yes at times, experiencing mistakes. You’ve got to be brave.

Life is one big learning experience so if you use the insights gained from your journey, then actually, you end up growing out of your so called ‘mistakes’ (which by the way, when it comes to unhealthy relationships are actually blessings in disguise when you get out and a success because you’re not still continuing), because these are what actually pave the way to healthy success.

How the hell else are you supposed to know what is and isn’t working? You also cannot expect to even begin to fulfil your potential and avail of opportunities, if you live in fear of choosing and using your faculties to make decisions.

Many of the things we struggle to make decisions about aren’t black and white, although that being said, they’re often nowhere near as complicated as we make them out to be. When we fear getting it ‘wrong’, we have to recognise that when we make a decision, it’s about deciding about what is ‘right’ for us based on the knowledge we have at that time. What is the point in kicking ourselves for something that we don’t or didn’t know, and being angry for not possessing the knowledge and awareness to not look a gift horse in the mouth or to be a psychic looking into a crystal ball?

Decisions take courage as does admitting when something isn’t working for you and doing something about it – when you sit on the fence, you never truly have a stake in anything and you at best have a half life.

The last thing you want to be doing is looking back on your life wishing that you’d been more brave, said YES, said NO, taken leaps of faith and believed in yourself. And remember: making decisions is like using muscle; the more you use it, the stronger it gets. You don’t ever get to learn how to do anything without actually having a go at doing whatever it is and being prepared to learn from what happens.

Find out more about what happens when you don’t make decisions in my books Mr Unavailable and the Fallback Girl and The Dreamer and the Fantasy Relationship.

Fantasy vs Reality: When you struggle to differentiate between what was real and what wasn't
Your Plan Isn't The Plan
It's Not About You