Love Lessons: When You Can’t or Won’t Ask Questions of the Man You’re Dating/in a Relationship With (P1) 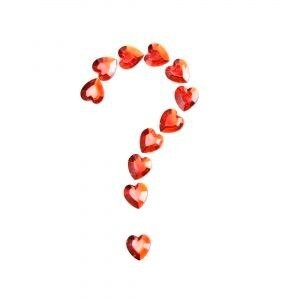 Following on from love lessons about getting the relationship you expect, not every man is worth keeping, and trying to get men to be the exception, here is another (rather big) love lesson:

A relationship with too many questions, not enough answers, and a fear of asking questions and/or a fear of getting the answers, is a very unhealthy, illusionary relationship.

When your relationship has question marks all over it and they’re not being answered, and are possibly multiplying and you’re burning up brain energy wondering what ‘this’ all means, it is a red flag – either your mind is working overtime and you’re dramatising your relationship or the person is doing things that cause you to question who they are and what you’re involved in. Either way, questions are not being answered.

I dated a guy several years ago who ended up being my epiphany guy/relationship because I looked at myself and my love habits in a totally different way that made me face my own contribution and it became nigh on impossible to go back to the Me Before Him. In our barely there relationship of five months, I didn’t know where I stood with him. He’d pursued me, texting, emailing, phoning, and wanting to spend time together and within two weeks of finally ‘getting’ me, he started to veer between warm, lukewarm, and cold. I wondered:

What’s going on with him?

Is he not over his ex?

Are we in a relationship?

Until I told him to take a run and jump, I did not directly ask him any of these questions and I barely asked them indirectly. I cracked jokes, used sarcasm, dropped barely recognisable hints, and avoided being ‘needy’ or asking ‘difficult’ questions for fear of either scaring him off or me asking him for the status of something that I wasn’t even sure I wanted – yes, I was a walking conflict of interest with commitment issues.

There are two things (of many) that I can teach you that are unavoidable facts about relationships:

1) Often, you actually hold the answers to all (or most) of the questions that you have about your relationship and/or him without having to ask the guy a thing.

If you have your eyes open, your feet in reality, the fur coat of denial and the rose tinted glasses removed, plus use of instincts, gut, judgement and awareness of your boundaries, red flags, and matching actions with words, you have all the answers – you just need to process the evidence.

2) If you can’t or won’t ask questions of the person that you’re in a relationship with or are dating, you are sealing the demise of the relationship and setting an unpleasant tone.

You must ask questions and if the answer falls short, get clarification. If the answer means something shady for you, don’t deny it! Accept the information and apply it to your relationship and ask yourself what it means to you and take action.

In the end, when it came to my ex Mr Unavailable and I, all of the answers were right in front of me and had been for the entire duration of our ‘relationship’.

What’s going on with him? – He was making it clear through his actions that while he may have pursued me, he had since realised he wasn’t ready for a relationship and was doing his utmost best to manage down my expectations by teaching me not to expect the same level of contact or effort as before. His actions were telling me that I was an ‘option’.

Why isn’t he calling/texting/emailing like he used to? – He overestimated the level of his interest and the reality of being involved with me panicked him. The novelty had also worn off and he was busying himself being a Jack The Lad.

A key sign that you’re with a Mr Unavailable or in a dubious relationship, is that things seem to go into reverse.

Where other relationships grow, they go from hot to cold and then flit between temperatures, manage down elements of the relationship (or all of it) and basically stall the progress. If you’ve come to a halt, are regressing, or taking two steps forward, and then one, two, or more steps back, you’ve got a reluctant passenger on board.

Is he not over his ex? – He’d been with her for nearly a decade and two months later he was chasing me. I doubt he was over her and even if he was, he wasn’t ready for a relationship.

If he doesn’t see you both in the way that you see yourselves or how you’d like to be seen, you have a glaring disparity.

Are we in a relationship? – If I had to ask this, the answer was NO.

Don’t make assumptions based on illusions and don’t spend extended time with someone pondering what your status is – it’s likely that it’s not much because you’re certainly not feeling it.

I could have spared myself copious amounts of brain energy consumption by judging him by his actions, how I felt, and the ambiguity and anxiety that was our non relationship.

Even scarier, I could have found out what the status of our ‘relationship’ was by asking him.

So why don’t we ask questions?

We’re afraid of how we may appear. We don’t want to look or sound needy, too interested, too anything.

We’re afraid of hearing something that we don’t to. That very thing we want to know or should know is the very thing that may suggest that we have to adjust our ideas about the person or the relationship we thought we were in or that we were going to get – the end of the Big Dream/the illusion.

We’re afraid of conflict. Whether they have communicated that asking questions will result in negative consequences or we have assumed that there will be negative consequences, either way, you end up in the dark both out of a lack of judgement but also out of fear of their reaction. Fear of conflict sets a really bad tone for relationships as you’re compromising on a very negative basis and possibly without the input of the other party. You’re not being yourself.

We do but we’re hearing but not listening. Some of us do ask questions – we’re just not that interested in the answers. We like to talk a good game, discussing the situation to the nth degree but not really doing anything – Women Who Talk (and Think) Too Much.

We think hinting is asking. I call this Going Round the Houses. We assume that they pick up what we really mean when we ask indirectly or in a veiled way what is going on. Instead, they miss the point entirely, plus we get to keep living ‘the dream’, albeit feeling frustrated that we’ve been ‘asking’ but not getting a straight answer.

Hard as it may be for some to hear, it’s time to start asking questions. Yes you might be vulnerable in that moment, be met with resistance or negativity, be put in the position of having to make changes, be forced to have your ears switched to ‘listen and process’ mode, and be direct instead of skirting the issue and hinting it, but it means that you will be in a relationship based in reality, not in illusions, which gives you personal security and power to decide where you want to be.

Trust me, if you don’t ask questions, people make decisions on your behalf and assume that you are going along with the terms and conditions of whatever they’re offering – think of asking questions not only as part discovery and part clarification, but it’s also a way of getting the ‘small print’ out in the open.

Back in part two.

Your thoughts? Have you been avoiding asking questions?

How To Piss Off a Woman in a Club/Bar
When They're Not Over Their Ex: A Lesson In Empathy
11 Love Reality Checks for the New Year