Sometimes a discussion doesn’t cut it. Stop discussing, get to FLUSHING! 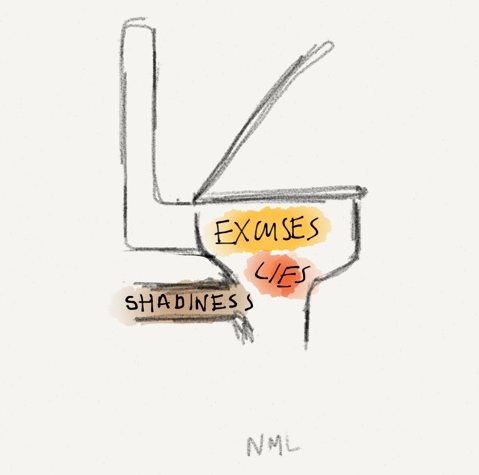 There are many situations and topics in life that you can have discussions about, but when it comes to the recognition of shady behaviour and what in fact might be repeat shadiness, it’s time to stop discussing, get to flushing. Your boundaries are yours to uphold and if someone would go to the trouble of busting them, you having a chat about it is only going to give the impression that you’re not really that serious and are open to having them crossed again.

Your job in life isn’t to raise adults from the ground up. If you don’t think that a person knows the fundamental difference between right and wrong and you feel that they lack an affinity with basic respect, it’s time to step.

When a reader asked me what she should do after discovering that her commitment dodging ‘boyfriend’ had stayed with another woman for three days (it’s not the first time he’s done this) and he was refusing to discuss it, I replied, “You don’t discuss him being away with another woman; you flush his ass fast.”

Sometimes you have to ask: What is there to discuss? More importantly, it’s time to ask, what the beejaysus are you doing ‘discussing’ boundary busting behaviour?

There is no explanation that covers screwing someone else for a few days. What are they going to say? “I forgot my way home…. I was held hostage by a sex crazed woman/man for a few days… I ran out of clean drawers… I was so afraid to tell you after the first day that I decided to stay for another couple of days…”?

If somebody doesn’t see things or your involvement in the way that you do, they won’t feel obliged to explain their actions. If they’ve previously crossed boundaries and had discussions with you, they’re highly likely to have worked out the pattern and will know what to say/do including stonewalling, Future Faking, Fast Forwarding and distancing themselves in order to calm you down or panic you into submission.

You don’t negotiate with your boundaries or your dignity and if a discussion or repeat discussion is going to diminish you including undermining your credibility, flushing this person by mentally and physically distancing yourself and moving on is the only way.

Let me tell you from personal experience – these discussions will turn you into someone you don’t recognise who suffers with Thinking and Talking Too Much.

I remember one ex trying to palm me off with a feeble explanation for why he didn’t come back for 13 hours after saying that he needed to pop out for an hour to help a friend and then turned his phone off all night. I actually called the hospitals and eventually had to call his friend, who then must have passed a message and ‘suddenly’ my ex was calling me. As I listened to his tale, I remember thinking, “I’m not doing this” and I ended it the following day because playing the fool and ‘Columboing’ in my own real life episode of Cheaters was not my style. It’s a shame I didn’t extend my dignity to my next ‘relationship’ with the guy with a girlfriend because I became the woman that had about a thousand discussions on Why Haven’t You Left Her Yet? Is It Because I’m Not Good Enough?™.

In a mutual relationship or just an interaction with a reasonable adult who is capable of empathy and who has an affinity with accountability and responsibility, a discussion in the sense of debating or conversing on a topic, exchanging ideas, or trying to reach a conclusion with a view to making a resolution, isn’t going to leave you hanging.

There is no conversation to be had about why they’re doing you over, again.

There’s no debating the legitimacy and validity of your boundaries and you sure as hell shouldn’t be giving them the green light to duck responsibility in their attempts to put their shady behaviour on you.

Don’t ‘negotiate’ with people who don’t even have the basic courtesy and personal value to respect you due to not valuing their own integrity. The more you discuss is the more it looks like you’re convincing you that their behaviour is about you, or that you’re trying to sell you back in to an already unworkable ‘deal’. Stop discussing, get to flushing.

Needing to go No Contact isn't about being a 'bad person', immaturity, or punishment
Podcast Ep. 226: Yeah, but am I needy?
Recognising Things About Yourself In the Man You Profess to Love Part 2