Stop The ASSumptions!: 28 Dodgy Reasons People Give For Choosing Someone For A Relationship 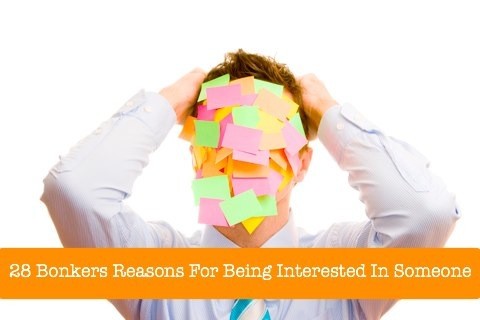 When readers share their reasons as to why they’re in love with someone or why they won’t leave, or what attracts them, I’m genuinely perplexed at times. Here are just some of the most common reasons:

2. They share similar hobbies and interests. If Ted Bundy had liked to knit, sew, bungee jump, and read 18th century literature and basically liked all of the same things you did, would you still have wanted to go out with him? Er, no, because his values were diabolical. If you don’t share core values, your shared interests don’t mean anything.

3. They appear to be very good at their job. It’s just a j.o.b. How well someone delivers PowerPoint presentations, or captures criminals, or saves lives or whatever, has nothing whatsoever to do with their capability for a relationship. There are many workaholics who are brilliant at their jobs and score a F for their relationship skills.

4. They’re respected by the community. You’re not going out with someone’s public image. There is a big difference between helping out on the tombola, donating to charity, helping the elderly with their shopping, and having a relationship with someone. I don’t think I need to point out the number of ‘helpful’ criminals who have shocked their communities with their misdemeanours. It’s not about being distrusting; it’s about not being a sheep.

5. They’re great at sex or even The Best You’ve Ever Had. Unless they have a character and relationship to match, short of supergluing them to you so you’re permanently having sex, you’re wasting your time. Sometimes the sex is great because the relationship has nothing else going for it.

6. They appear to have lots of friends. There’s a lot of popular playas out there. I also know of people who have hundreds of friends on Facebook and don’t have one close friend. Some people who appear popular, only appear popular in the context of someone who doesn’t see themselves as popular or liked. Some people who are ‘popular’ are more feared than liked. It doesn’t matter how many friends they have – what matters is how this persons treats you.

7. You instantly fancy them or you have to fancy them immediately before you’ll consider going out with them. I’ve instantly fancied quite a few people. Where are they now? *whistles* Your sexual organs/libido are crap judges of character. How about growing to fancy someone, instead of fancying immediately and clinging to an illusion?

8. They talk about God, Buddhism, yoga etc. Great, but again, do they embody these values? Also be careful of those who doth protest too much. Most people who truly do embody these values don’t go on about it or use it as pickup line…

9. They’re respected at work. Until you get to know someone one-on -ne, what you know is their image. That and how respected someone is at work has got shag-all to do with how they will treat you or their ability for a relationship.

10. They have a large penis, big breasts, a certain colour of hair, a certain height, colour of eyes, a six-pack and other such irrelevant exterior factors. Objectification and vacuous vanity and superficiality will make for a superficial relationship lacking in substance.

11. You pity them. Pity is not love or even like. It has no business in a relationship. Don’t make other people’s pain and problem’s your purpose.

13. They’re an only child/middle child/eldest child/youngest child/one of X children…and you were too. Er, what the what now? I’m not saying that you might not have common experiences, but I wouldn’t assume that you’ll automatically ‘get’ one another and that you’ll know what they think, feel, and do.

14. You had similar painful experiences as children or in adulthood. Again, it can be the making of some common ground, but I certainly wouldn’t use pain as a marker for interest, nor should you assume you know what they think, feel, and do, or assume you can fix them, or that they have recovered to the same extent as you. Instead of using pain as a common ground, resolve your issues.

15. They’ve recently broken up with someone too. Oh, so because you’re both hurting, you can comfort one another out of your pain? Er, no. That’s two people not over their exes and avoiding their feelings, and at least one of you is going to be burned.

16. They’re good with animals and children. This is nice, great even, but it actually has little bearing on how they will treat you unless you’re 1) an animal or 2) a child. It also doesn’t mean that they’ll want a pet or to have a family. Oh and you’d like to think that the type of love poured into animals and children is different from romantic love…

18. They’re in their 30s so they must want to get married or they’re 40+ so they won’t want to be casual. I know people in their 20s who have been married for years. I also know people in their 50s who are less mature than a teen. Don’t make assumptions about people based on their age – judge someone on the merit of their actions and words matching and the relationship you’re in.

19. Another person wants them. It’s like people only become interesting to you when they’re ‘preapproved’.

20. They’re close with their family. Er, no, this doesn’t mean that they’ll want to commit or introduce you to them.

21. They’ve had the exact same job for a gazillion years. Clearly you value stability, but I wouldn’t go assuming that they want or are capable of a stable relationship. They may be brilliant at the job…or they may lack ambition.

22. They have their own house, car and teeth. You immediately realise that material goods, security, and er..dental work are very important to you. But what can these things do for your relationship?

23. They have a lot of money. But that wouldn’t stop them from being emotionally bankrupt.

24. They’re currently attached/married. Back to that preapproved thing again. If you’re thinking that they’re commitment able and they’re having an affair with you, you’re only demonstrating that you have no idea what commitment means.

25. You like the same political party. Or you both recycle or are vegans. Yeah it’s common ground and some common values, but if you value honesty, commitment, and family as well, it will be of no use to be with a recycling, vegan, Conservative that has an allergy to commitment or the truth.

26. You’re in a similar profession. It can be nice to work in the same field, but it’s hardly critical. What are you? God? A higher power? A rocket scientist? It’s not critical to go out with yourself… Broaden your horizons. Switch off from your job. Oh and don’t be blinded by intelligence either.

27. They go to therapy. Some people go to therapy and do therapy, and others pay lip service to it and it’s just this thing they trot out to woo people without actually ever growing.

28. They behave at their worst. Don’t be flattered by their lack of shame and decency – run. It’s not because they love you why they behave this way!

Do you know what matters?

How you treat each other, whether you share a common view and direction of the relationship, and whether you share similar/complementing values with regards to how you both want to live your lives. Everything else doesn’t matter if you don’t have these components. Stop making assumptions – start taking the time to do discovery in your interactions.

The Broken Windows Theory Applied to Boundaries & Self-Esteem: Time to fix your window(s)!
Compatibility, Your Type, and Common Interests Part One
Podcast Ep. 54: We Were On A Break, Nailing Down Intimacy, Snap Judgements