What’s the Craic With Ghosting? (And no, it’s NOT the same as No Contact!) 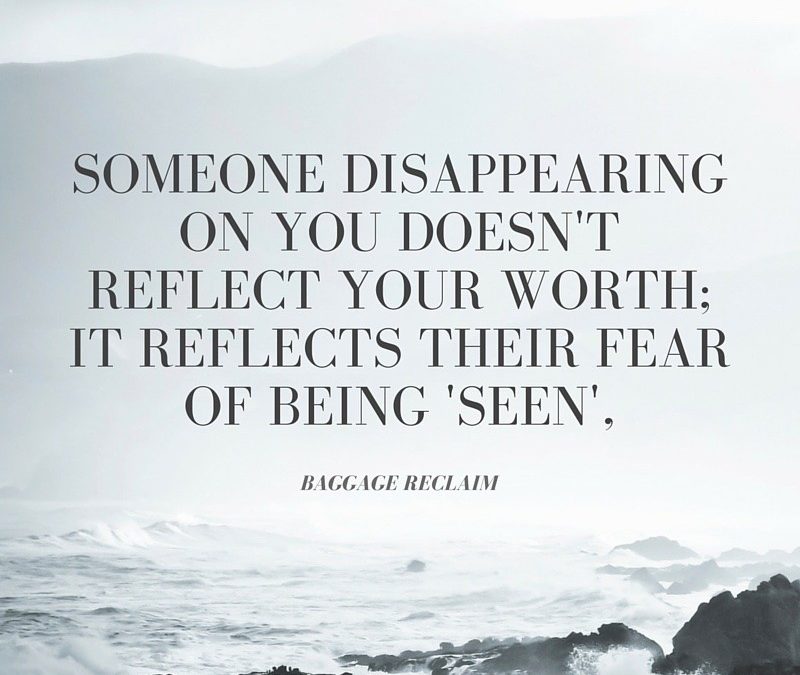 When we need to break up with someone, there’s a temptation when we are faced not just with the prospect of acknowledging a partner’s position and how we might be impacting them, but also with the prospect of seeing and hearing them, to dodge the conversation. Some people feel this way but face it down. Some people drop hints in the hopes that by hinting at issues or behaving badly, the other person will do their dirty work. And some people disappear or what is commonly referred to as ‘ghosting’.

Ghosting is when a person disappears because they would rather do that than 1) be honest and direct, 2) face their partner’s feelings and reactions or 3) be open to recognising either their part in things or that they can’t be Mr or Miss Comes Up Smelling of Roses.

Over the last few months, I’ve heard from an increasing number of readers referring to ‘ghosting’ or being ‘ghosted’ and it’s important to get something clarified right off the bat:

Ghosting is not a form of breaking up nor is it the same as No Contact.

Ghosting is disappearing. Breaking up is when a person ends the relationship and No Contact is for after a breakup when it becomes apparent that healthy boundaries are not possible and that remaining in contact is destroying sense of self and the ability to process the loss and move forward. The only exception to No Contact happening post-breakup is if it’s an abusive relationship.

Disappearing isn’t exactly a display of courage and we are most likely to do it if we’re not emotionally mature or available.

Sure, it’s uncomfortable to let someone down, to admit that this isn’t what we want anymore or that our feelings have changed or whatever our reason is, but it’s also necessary. It’s how we not only build up our being human muscles but it’s also how we develop our relationships.

People who disappear / ‘ghost’ learn nothing because they edit and erase themselves out of relationships so that they don’t have to confront anything. It’s not even necessarily about doing things from a ‘bad’ place (although there are some incredibly shady people who employ ‘ghosting’ so that they never face consequences and instead press the reset button); it’s about doing things from a place where fear, cowardice or excessive concern about how we look or our discomfort, trumps integrity and compassion.

I’ve talked to a number of ghosters and all reason that they didn’t want to hurt the person’s feelings. Really? It doesn’t take a rocket scientist to work out that granted, feelings do get hurt in a breakup but disappearing sucks.

What a ghoster fails to acknowledge is that they are motivated to cut and run because they don’t want to hurt their own feelings. They end up throwing their partner under a proverbial bus all so that they can box away their feelings and draw a line under things, on their terms.

It’s about control, as in attempting to feel in control of the situation in their head rather than having to deal with an unpredictable foreign object like another human who they’ve made plans, promises, exchanged bodily fluids with, and inferred all manner of things via the interaction. They’re in control of the story because disappearing means that the ghostee can’t talk back and offer up their version of events, plus it also means that they don’t have to be interacted with.

Things to note about ghosters:

If you’ve been ghosted, what I can tell you with one hundred percent certainty is that it’s not about you; you did not deserve to be disappeared on. It’s not about whether you’re “good enough” to be broken up with; it’s about that person’s own journey with conflict, criticism, rejection and disappointment. No, it isn’t nice what they’ve done and yes, the decent thing would be to give an explanation, but their inadequate style of ending a relationship doesn’t reflect your inadequacy.

The one who stands to see right through the facade of a ghoster who does not want to see themselves, is the one who’ll get the disappearing act.

Many people wear masks–BR readers often wear the people pleasing one. The problem with a ghoster is that they have become so good at hiding their feelings and true opinions from others and putting up a front that they’ve forgotten the lie is a lie. You may or may not have been aware of their mask (hindsight gives 20:20 vision) but disappearing means that for you, you have to drop the mask from your picture of them. They haven’t gotten off scot-free– you can run but you can’t hide from your feelings and thoughts so life will find a way to bring the disappearing acts to the fore for resolution.

The key is not to keep blaming you. It’s understandable to a degree when it first happens but it’s the untruths that will make you unhappy so don’t tell you that Mr or Miss Perfect disappeared and that it was all your fault or that if you’d been “enough” then you could have fixed their issues so that they wouldn’t disappear.

Don’t disappear on yourself.

PS I have a separate post coming up in a few days which addresses ghosting in dating.

Stop Ruminating. Stop Obsessing. Stop Over-Thinking. Very little is going to happen without ACTION.
11 Signs You’re in the Wrong Relationship and That It’s Time to Break Up
We don't realise how much we missed ourselves until we're out of the painful situation