We can’t keep trying to recapture the beginning of a relationship; we’ve got the present to live in 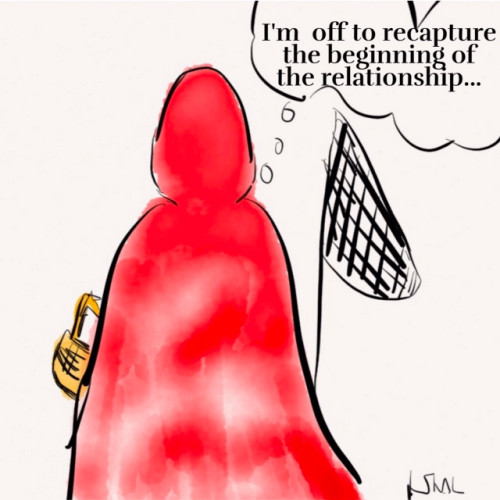 Some of our strongest ties to even the flimsiest of relationships, are based on what we experienced or even hoped for in the beginning. When we’re living in the past because the present has too many code red realities biting at us, we end up spending a great deal of our time trying to recapture the feelings we experienced at the beginning, or the person we believed or assumed them to be, or even what we thought was our best selves in those moments. It’s for these very reasons why we may find it hard to recover from a relationship that didn’t even happen – we struggle to get over the loss of our hopes and expectations.

We like how we felt and acted during those times and want to make that happen all of the time, even if the reality of the present doesn’t lend itself to this. This means that we can spend an overwhelming disproportionate amount of the entire relationship, trying to turn back time and also trying to turn the minority of the relationship into a full-time gig. Of course, we lose track of time because clearly, when we took up this vocation, the good times were in a different context.

As a very typical example, let’s imagine that we’re saying that the first three months were “fabulous”, “almost too good to be true”, “everything we’d hoped for” and like “the long-awaited reward for all of [our] trauma”.

If this continues on into month 5, the ‘good’ still outweighs the not so good.

In month 6, we reason that it’s half great, half not-so-great and that we’re capable of getting three good months out of them so we, in theory, even though it’s not the beginning anymore, deduce that we should be able to get another three-month run out of them. It’s a bit like when stars do those Las Vegas shows for however many nights for a few months – we’re now waiting for the ‘next run’. Of course we forget that if we could also get three dodgy months and at such a relatively early stage in the relationship, then it’s also fair to deduce that we could get another stint of that too. We also forget that people unfold and that if six months in, a person is showing a low commitment and consistency stamina along with contradicting values that will only add to what is already a busy plate (the nuts and bolts of a relationship and dealing with our respective selves and lives individually and together),  we’re going to be in for a hard slog. Still, when it’s half and half, even if in terms of the bigger picture it’s a relatively short period of time for it to be this way, we’ll believe that we’re invested and also be looking for a return on investment.

Let’s imagine that we’re now 9 months in and while we have some highlights, we basically haven’t been able to consistently recapture the beginning – we’ve now gone from being in a situation where we could rationalise that it had been mostly good, to it really being almost 67% not so good or even bad. We’ve then spent six months of a nine month relationship fighting to recapture the past, while struggling in the present and possibly denying, rationalising, and minimising so that we can keep chasing the past.

The more time that goes on, the more out of context the beginning looks. We’re in a relationship of diminishing returns and we’ll know because we’ll have less self-esteem and energy than we entered into the relationship with, even if they weren’t that high in the first place.

I’ve heard from so many people who have stayed in relationships for years based on anything from the first few days, weeks, months, or the first year. Some are clearly waiting for a happy ending. Films and fairy tales peddle this concept of falling for someone and battling adversities such as commitment resistance, being treated like a hooker, being ignored, fighting an opponent, aliens, freak weather in a metropolis and other such puff and it all being resolved and living happily ever after around 90 minutes or so. They also peddle the ability to love someone based on a first impression gained via the eyes and initial feelings aka love at first sight aka the libido and lust version of Mystic Meg. No need to rub a crystal ball – just follow the gravitational pull of our pattern or even our libido.

We can’t squeeze all of the adversity into our own fairy tale or film so there’s no quick fix. Not only does it infuriate us when we can’t get instant results or take shortcuts, but the reality is that even if the beginning is brilliant, we can’t base an entire relationship and our desire to stay based solely or primarily on the beginning. From the moment that we start living in the past, we’re talking about something that’s effectively over for us, because the present isn’t satisfactory and we can only begin to feel safe in betting on the potential of the future, if we can get some reassurances that the beginning is going to show up again and let us revise ‘the ending’. For this reason, when we won’t get to work in the present, that beginning we get so obsessed with is also the end, just not the one that we expected.

If we’re going to truly work at something, that work is here in our present, not in trying to make the picture in our minds true.

The first steps to addressing issues within our relationships, is getting into the present where our attention is needed and also at its most valuable and productive. We can only really know what we’re in and what we can address, by being willing to be conscious, aware, and present in our relationships and also by being connected to ourselves right now. The past is done so we cannot effect any great change there – our time is now. When we’ll disregard the present, including our needs, expectations, wishes, feelings, and opinions, our reliance on our perception of the past to shape our current thinking and actions, can lead us to a great deal of pain. We’ll blame ourselves for why the beginning is different from the middle and the end, as well burdening ourselves with inappropriate responsibilities for trying to put things right. That is not even the beginning of the most appropriate use for our time, energy, emotions, and efforts. Ultimately, we can’t spend an entire relationship at the beginning just so that we don’t have to truly get to know a person and let them know us, or so that we don’t have to deal with reality and things being less than perfect.

A Tale of Two Commitment Resistant Birds - Are you hiding your commitment fears behind someone else'...
Podcast Ep.21: The Early Stages of Dating Is Guesswork, Do I, Don't I? Decisions, Decisions!
Getting Over Him When You Thought You Were Friends Part Two
Share this...