Stop Skipping The Discovery Phase: Why It’s Time To Drop The Shortcuts That Aren’t Really Shortcuts 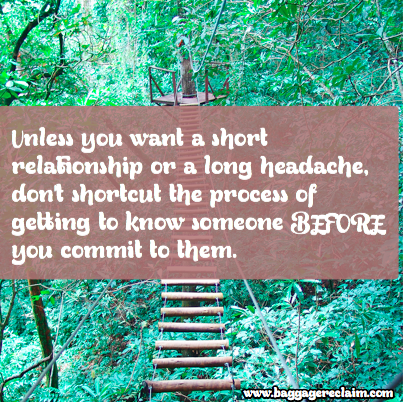 When I reflect on the times when I’ve thought that I could plunge into a relationship and believing promises without truly knowing someone, or even when I skipped even the most basics of relationship etiquette and was involved with the guy with a girlfriend, I recognise that I’m guilty of taking shortcuts at things that I didn’t actually know the ins and outs of the ‘long way round’. It would be one thing if I was taking a shortcut that actually generated the desired result and caused me to ‘end up’ with the relationship I wanted, but the shortcuts I used to take led to me ending up on the long road of pain.

Cutting corners on Very Important Stuff can not only cost you dearly but may cause you to ‘shave off’ vital processes or information that are critical to the quality/success of the result. The period of time after you first meet someone is the discovery phase where you’re ideally discovering the facts about one another. Unfortunately, if you’ve been caught out by assumptions that remained assumptions that you treated as facts, or by Future Faking or Fast Forwarding, it means that something has gone very awry during the discovery phase and that you may assume that you know people sooner than you do and that you don’t need to go through all of this ‘rigamarole’.

Why actually get to know someone when you could be naked, fantasising, or just making sh*t up as you go along?

The idea of a shortcut is that it’s supposed to be a shorter alternative route.

On the surface, the shortcuts we attempt to take in dating and relationships (or acquiring our self-esteem from others) are ‘short’ so we can convince ourselves that we know someone or feel deeply connected even if we only met them a few short hours or days ago. In fact, we can do this with people we haven’t met.

We might not think anything of the fact that we don’t really know anything about someone’s core values and how they vibe with our own because we think that we’re going to get on ‘just fine’ because of common interests, or our ‘feelings’, or the connection. It’s this idea that if X exists then Y must too even though it’s completely untrue. We think we know what’s coming next, not because we have any true experience of the person but because it’s just what we think and predict based on our thinking.

And therein lies the problem. The fact that we might think that we can take this shortcut assumes that we’re aware of what the long route is, but if we’re taking a shortcut on something as crucial as getting to know someone and our emotional investment, this in itself would suggest that we’re not really aware of what’s involved. Or….we might actually think that the shortcut is the standard ‘journey’.

When you take shortcuts, you ride with assumptions, you focus on superficial qualities and values, and effectively try to cram in feelings, expectations and experiences that are more akin to a relationship that hasn’t been cobbled together.

It’s actually not entirely about the length of time per se, although if it’s a very short period of time, or you haven’t met, or what you’ve been doing with the time doesn’t really leave room for getting to know one another, the time or lack of it is certainly going to be very influential.

The problem is thinking that you could actually build a substantial relationship without the substance or with faux substance built on assumptions and the like.

It’s illogical to believe that you could skip over the discovery phase of due diligence and still expect to wind up with a substantial relationship. It’s like expecting to win the lottery without playing the numbers or to buy your home without doing the paperwork and paying the money.

It may even be that you’re thinking that you could skip this stage, get them to commit to the relationship you have in mind and then do the discovery phase and if you find anything you don’t like, you can get them to change it, because in your mind they’ve already agreed to the relationship so if they’ve got something that’s impacting what they’ve agreed, they need to get rid of it.

But then as I was thinking about this whole ‘shortcuts’ issue, it made me question whether a relationship in the fullest sense of the word is what we’re really looking for when we opt for what tend to end up being painful shortcuts? Think about it:

This comes back to the self-fulfilling prophecy and examining what you truly believe because taking shortcuts is wanting to achieve the result without going through the process.

Now either you don’t want what you say you want or there is something ‘off’ with your masterplan i.e. your thinking and behaviour with regards to dating/relationships or even yourself that you’re as yet unwilling to reevaluate and change course on. It’s got nothing to do with how ‘good enough’ you are and everything to do with your choices and the thinking behind them.

You might feel like you’re bashing your head off a brick wall in spite of what feels like increased efforts because you’re engaging in relationship insanity where you carry the same beliefs, baggage, and behaviour plus possibly engaging with the same or similar people in different packages while expecting different results – trying to be the exception to the rule.

You’re for instance, seeking a relationship where you’re ‘loved’ but has it occurred to you to examine what you’re actually looking for and what being ‘loved’ and a relationship looks like? I used to think I was looking for love – turned out I was ‘Daddy Hunting’ and looking for a mix of my father packed up with the stuff I’d decided I wanted out of a relationship, which wasn’t much other than attention, being loved, and height…

This is when you have to say to yourself, What if what I’m thinking and doing isn’t working for me?

It’s not about right vs wrong – it’s about acknowledging where sticking with a pattern of thinking and behaviour isn’t working for you.

The alternative to taking the time to get to know someone and to consider the bread and butter stuff like shared values and the landmarks of healthy relationships isn’t to take little or no time and just to make it up as you go along or hope that somewhere between getting laid, sending a few texts, hinting, pleading and rumination that you’re Ideal Relationship ™ is suddenly going to materialise.

Relationships take work (not hard labour) so if you won’t put the work in at the beginning to do the due diligence, you can be sure of hard labour soon enough, but if you do put in the work, you’ll opt out of what isn’t working for you and reap the benefits when you’re invested in something mutual.

Believing It's Impossible or Very Difficult To Change? If You've Changed To Accommodate Unhealthy Re...
Tips: How to break up with a lovely person
What being screwed over on a house taught me about living up to your values and commitment
Share this...