When Your Ex Returns AGAIN, It’s An Opportunity To Do Right By You 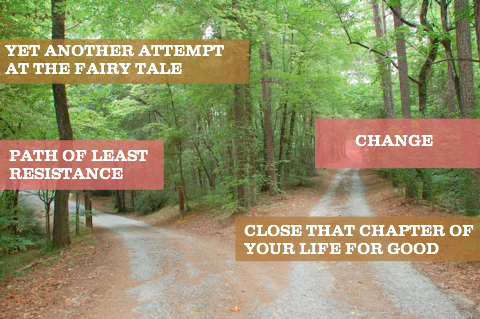 Five years ago, a reader got in touch after her Returning Childhood ‘Sweetheart’ breezed back into her life after nearly 20 years, Future Faked and Fast Forwarded her off her feet, gradually started to blow lukewarm, then cold, and then unceremoniously dumped her for a woman closer to home because he couldn’t handle the long distance…even though she was moving there. Devastated, as she thought this was her second chance after nearly a decade long dating hiatus, she couldn’t comprehend how he could bust her heart into a million pieces all over again. Yet would you believe it, just like Mike Myers in Halloween, this man is back for a third attempt.

Now at this point, there are two paths to choose between: the path of least resistance, or change? So what do you think happened next?

She went down the path of least resistance, re-engaged, and started contemplating a third future with him. He admitted that he has issues (no sh*t Sherlock) but then made no indication of whether he is dealing with them and in fact seems resigned to them. When he got in touch the second time, it was after his divorce and this time, he’s got in touch after his relationship with the woman he left he for has ended. Flattering, not. He doesn’t really have anything to offer, he hasn’t dealt with the issues that broke their relationship, he doesn’t like to be alone, and he’s basically looking for a quick fix from the woman he can always rely on to get a good reception.

I was horrified that she would actually even contemplate putting her hand back in the fire again, not least because this man has had her heart and her hurt for all of her adult life. Where does this end? She’s not alone – I heard from a reader who has been doing this for fifty years.

As I was shoving stuff into the washing machine, I thought of this woman’s mother who passed away recently and made her promise that she’d go and live her life. I then thought of some of the very heart-wrenching comments and emails that I read from so many others in the same situation and then it came to me:

When your ex who broke your heart for whatever reason, comes back into your life, it’s an opportunity, just not for what you think.

As I said to her “He could equally be back to give you an opportunity to make things right with you and knock this whole palaver squarely on the head. It’s a test of your resolve, your emotional backbone, and an opportunity for you to gain closure, not so much on him (although this will be gained), but also on the things that have rumbled around in your head all of these years. You have an opportunity to grab your regrets and knock the wind out of their sails.” This could be you.

Life keeps throwing you the same lessons until you heed them – what are you supposed to be learning here? What have you learned that you need to apply to this situation?

You can never have too much regrets when you’re willing to listen to yourself and the feedback from your life and grow as an individual – regret kicks in when time passes and you find yourself in the same situation and you realise that your mentality and what you’re doing hasn’t changed.

If you’ve blamed yourself during an ex’s absence and in spite of their actions, denied, rationalised, minimised, and excused very obvious indications of why you’re not supposed to be together, you are highly likely to miss out on this valuable opportunity because you’re too busy trying to be the exception to the rule and have your fantasy ‘ending’.

I recently heard from a Mr Unavailable, who was gutted after making a bid for his second go round nearly forty years after cheating on his ex and finding himself blocked and with a warning from the po-po not to get in touch again. He couldn’t understand why he couldn’t just inject himself into her life and have an attempt to redeem himself. He had his chance, it’s over, and it’s just not flattering to think that someone has nothing better to do with their time whether it’s been months or years, to do nothing but hope you might show up one day with a text, email, or even friend request on Facebook!

When you feel helpless to life, it’s easy to think that another entity with their own agenda that keeps showing up because they have the tenacity of a cockroach after a nuclear bomb, is where you’re destined and that it’s a sign of their love.

What it is a sign of, is that when they go through their mental Roladex of who is most likely to still hold them in high regard because they’re living in the past, they think of you. They tend to get in touch after they’ve hurt someone else, so that you can pump them up and give them a clean bill of health, like “Look, I’m not that bad! My ex who I’ve effed over a few times will still give me the time of day!” Then they launch themselves into their next relationship.

You have an opportunity. Use it well. You can draw a line under this and handle them with the high esteem you only wish you could have had the last time, or you can go for a repeat. You can give them all the power for how your life will be, or you can grab it back. Remember that nobody can breeze up in your life time and again and wreak havoc in it without your consent. They will stop contacting when you stop engaging because you’re no longer granting them access.

When life throws you lemon exes, make lemonade and squeeze them out of your life.

Oh and you’ll be pleased to know that the reader has flushed.