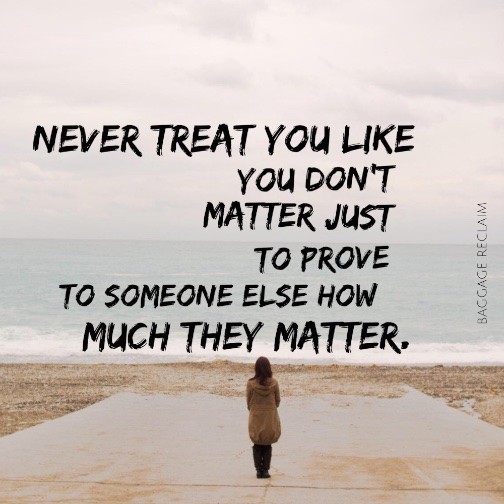 Over the years of writing BR, I’ve emphasised how relationships are 100:100. We have to own our own and let others own theirs. We have to show up and be our true selves rather than show up on the basis that we are half of a person and that we’ll do a bit and they’ll do the rest. With the whole 50:50 premise, we’re leaving a lot out. Where did the other 50% of us go? It’s difficult to dispute when we’re putting our whole selves in and are willing to evolve but once we start making others responsible for part of what we should be doing, the waters get murky.

There’s a very specific reason though why going into relationships with a 100:100 outlook is vital:

When we have a 50:50 mentality and we’re of the people pleasing, trying to fill voids inclination, we tend to overcompensate for our partners because aside from being excessively emotionally reliant on them for our self-esteem and very quickly struggling to discern where we end and they begin, we on some level don’t feel worthy and take ownership of other people’s feelings and behaviour. This means that we feel that we are more responsible for the relationship than they are.

We know that we have things twisted when we deny, rationalise and minimise concerns as well as our own needs, expectations, wishes, feelings and opinions. We keep telling ourselves that the reason why a person is unable to show up emotionally and in other ways, is because they’re having a “tough time” or are “busy”, or that we’re “needy”, “too sensitive”, or that it must be our “problems”. We pull back, tread carefully, up the efforts, shrink a little (or a lot), force a smile, keep trying to show how much we love and care only to feel as if that’s making it worse, and sometimes put up with some pretty unpleasant if not downright abusive carry-on.

Part of us is almost thinking, Jeez – all they have to do is the exam equivalent of showing up and signing their name! I’ll take care of the rest! Or, we’re thinking along the lines of, If it were me and I had somebody right here ready to love and care about me (even though I wasn’t pulling my weight), I’d be so grateful and loving. I wouldn’t want to leave.

Of course, the problem is that when they do leave or there are attempts to tackle the issues, because we covered their ‘share’ of the relationship and felt excessively responsible, we also feel excessively to blame.

We blame ourselves for it going wrong, for not being “enough”, and keep trying to retrace our steps to figure out where we botched things, wondering what happened to the “amazing” person that they were in be beginning… when we didn’t really know them and they hadn’t unfolded.

At what point did we start covering for them?

For many Blame Absorbers, it can be right at the beginning, often because they’re waiting for the other shoe to drop. There’s this underlying concern that this person may figure out that they’ve made a mistake so they buffer this by making some overpayments into the pleasing investment account (like when we make overpayments on our mortgages). This overcompensating can also happen because on some level below the awareness line, they sense that this person chimes with their pattern…so again, they get cracking with building them up. It can come down to an uneasiness that comes with the familiarity of certain feeling and thought responses to what is happening, or the familiarity of the person’s behaviour. It may feel like ‘home’…

It might start at what appears to the early signs of problems. Things may appear hunkydory and then, boom! They come back one day and it’s as if they’ve turned into Hollowman or Hollowwoman. The lights are on but nobody’s home. Or they suddenly respond lukewarm or coldly where they appeared to previously reciprocate and enjoy something. Maybe it’s after the first conflict or after feeling wounded by criticism. They’re asked if something is bothering them or whether they’re “OK” and they claim that everything’s “fine” while acting the opposite.

If you’ve been overcompensating for your partners, you will know because you’re either in it and taking ownership of their feelings and behaviour, or you’re out of it and doing the same thing and feeling wounded by your “failure”.

You’ll be damn near exhausted from trying to figure out the magic words and deeds to keep this person happy so that you can feel happy. You might not know your up from your down because you’ve been ignoring your instincts and listening to them deny, minimise or rationalise the very real concerns. You will feel as if you are failing or have failed because the relationship is all about your effort and on some level you know that you’re giving you away and all for what? To be left feeling inadequate and that nothing was ever good enough?

Well it’s time to ask, What about me?

It’s time to get honest and open up your awareness about where you have held you back and taken over their responsibilities. It’s time to be honest about where you have been hurting and where you’ve had to practically cattle prod partners into responding and showing up. You’ve got to be honest about where you forgot you while trying to make another person the centre of the universe. They’re just not that special. Why are you bowing down and acting as if a miracle has taken place in being given the time of day and now it’s like you have to prove that they didn’t make a mistake in being that person they were in the beginning? Why does everything rest on you?

We can empathise with people and recognise where they have their own stuff to deal with but you know what? If someone’s stuff is going to prevent them from chipping in with love, care, trust, and respect and they’re going to enjoy the fruits of you being an almost skivvy in the relationship, it’s time for them to jog on, because your efforts will not be respected and appreciated for it. If anything, they will feel some level of guilt and rather than step up, they’ll act out, keep distancing themselves from you while telling you what they think you want to hear or pulling other passive aggressive acts because the nicer you are the worse they feel; or they’ll make an exit where they can go back to their comfort zone or press the reset button, all while likely taking no responsibility.

Do not accept less than the very basics of what you deserve by overcompensating and then feeling that you have to wait for some sort of payback. Never treat you like you don’t matter in a messy effort to prove to someone else how much they matter. You know where you stand when you show up as a person who can own their own and has a good sense of self, because you can quickly tell where you’re being left hanging by somebody who is of a very different inclination. Instead of blaming you, you recognise that you both want different things and that no relationship of any decency is going to go anywhere good when it lacks consistency, commitment, balance, progression and intimacy that only materialises when two people show up to a relationship.

Forgive you for where you let them off the hook from showing up and where you forgot your own responsibilities. Learn from this experience and what you’ve experienced will be transformed from loss to the gain that it is. These experiences are there to teach us where we need to step up and show up for ourselves in order to change the nature of our journey.

Are You Trying To Be 'Good Enough'? Surprise! You're Already Are.
Turning 'Rejection Talk' On Its Head - Looking At Your Rejection Experiences From a Different Perspe...
We're Hearing But We're Not Listening: Turn On the BS Meter
Share this...