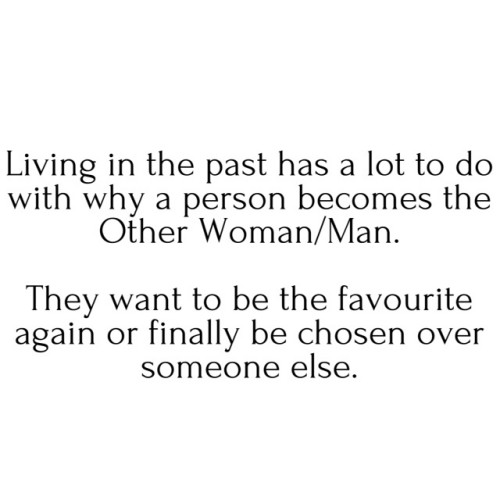 I’ve been exploring recurring themes that exist between childhood experiences and feeling almost at home, not only in an unavailable relationship but particularly in an affair, and reading through the many stories I’ve been sent, the same dynamic kept popping up:

If as a child, we were favoured by one particular parent and treated better than say a sibling or the other parent, we are used to a dynamic where we are preferred at someone else’s expense. If this is how we derive our worth and we also see it as normal or even flattering, this becomes an almost automatic precursor to us being the future Other Woman/Man.

It’s not always overt favouritism either. A concurrent theme was feeling sympathetic to one parent and almost apathetic to the other parent who is/was likely perceived as too passive or difficult, or even a ‘nag’. Whether it’s contempt that’s felt at the extreme end or pity at the other, this perception of things is likely based in part if not all, on looking at things through a child’s lens where assumptions and reasoning that ‘makes sense’ (even though it doesn’t), is used to rationalise why certain things have happened. These become beliefs that are used to inform our subsequent thinking and behaviour. We do things that agree with our outlook.

Those same beliefs are then used to adjust our own behaviour to ‘fit in’ and avoid what we perceive as negative outcomes.

We’ll ensure that we’re not ‘like them’ and this can translate into not voicing needs, opinions, feelings etc., and not wanting to be perceived as a source of ‘drama’. Cue people-pleasing and even Florence Nightingaling. Many of the stories I read referred to not just affairs but also being with people they attempted to fix/heal/help. It’s feeling for a time that they were favoured over that person’s problems and by deriving worth from being needed, feeling special. On some level, we can even derive some of our worth from feeling superior, whether it’s to the person with the problem or feeling superior to the person who is being cheated on.

When we learn to derive worth from being the favourite or certainly from not being like people who that parent did not like, love, or respect, we learn to appreciate and desire being loved or appreciated by someone who somebody else has to work even harder for the same thing or isn’t able to get it. We’ll even choose a someone who shares similar traits with that parent and may not even be aware that we’re doing so.

We may get used to being a sounding board or rolling our eyes in sympathy when they’re being strained by having to deal with these ‘pesky’ others. We try hard to please because we want to influence their feelings and behaviour so that we don’t get what those others do, and also because we want this person to give us the ultimate validation and leave. We feel as if we ‘get’ them even if we’re not actually engaging on a truly intimate level and are unable to relax and be our true selves. We tune out of problematic aspects of this person because we’re blinded and are likely coming up with reasons for these bad points, blaming their partner and the fact that they ‘have’ to lie and have an affair ‘against their will’ until the ‘right time’. We convince ourselves that they’re an honest cheat (no such thing incidentally – that’s an oxymoron) and amp up our specialness by convincing ourselves that it’s only their partner that gets the lies.

An affair can be such a lure because we get to experience that specialness from our childhood all over again. We feel favoured. We feel preferred.

Being the Other Woman /Man activates our competitive side and we feel fantastic initially because we have been marked as ‘better’. This sense of being the ‘real number one’ lasts for as long as it takes for us to realise that they’re not going to leave and/or discover that they are talking out of their bottoms and not anywhere near as great or available as we imagined. We hinge everything on the ultimate validation of being chosen and when they don’t leave, we feel deeply rejected. We decide that we’re not worthy of their love and have failed in some way instead of seeing the dysfunction of the situation for what it is.

And of course, not being the favourite but wanting to be, makes us like a moth to flame for an affair. It represents an opportunity to right the wrongs of the past.

If we’re still nursing old wounds from being second or something-best, we will initially feel high on being number one and then it’s just a matter of time until all of the second best issues are reactivated and we end up feeling like a desperate emotional wreck trying to convince this person to leave while also feeling that ‘yet again’, we have done something that shows that we’re not worth it. We’re using the same reasoning from our childhood – only ‘worthy’ people are loved or made ‘the best’. We think that love from this particular brand of person is the best kind of love and banked on being chosen so that the void from our childhood could finally be filled up. In them not leaving or certainly only viewing us in an affair capacity, it becomes confirmation that our negative beliefs are true. It reaffirms this idea that what we experienced as a child was the fault of our inadequacies and/or it confirms this idea that the only place we have in someone’s life is somewhere down their list.

Whether we were the favourite or felt second best, we can feel locked into a cycle of going back and forth with this person because walking away reopens the old wounds and so we try to get away from these feelings or push them back down, by trying the affair again. We feel temporarily better until the old feelings (and reality) seep in and it’s lather, rinse, repeat.

These realisations caused me to reflect on my own childhood. I was regarded as my father’s ‘favourite’ (I think I remind him of a different time in his life and this is all based on the first 2.5 years – I’m knocking on 37 now…), but I did not feel important to my mother. I didn’t want to be more important than my siblings, I just wanted to be on equal footing. This idolising of my father seemingly put a strain on my relationship with my mother from the outset and of course when they broke up and I felt lost and abandoned, feeling adrift with my mother was accentuated. It took me up until a few years ago to realise that I had also played up to this whole favourite thing around my stepmother in my early years but that there was also some tension with my mother about me getting on ‘intellectually’ with my stepfather in my teens.

The eventual affair I was involved in nearly broke me and served as an exorcism that brought all of the ugly thoughts and old wounds up to the surface. Ironically, choosing me and growing up my perspective somewhat – a lot of my view of me and relationships was from my early years – closed up that void. I stopped being that child looking for attention from its parents.

Of course the answer to having our self-esteem based on being the favourite or second best, isn’t to run interference in someone else’s relationship. Can we really say that it’s good, honest, clean love, if our motivation for loving and wanting to be loved is about not only living in the past but also specifically wanting this love because it overthrows somebody?

It’s when we acknowledge that we are in fact putting the past on repeat and trying to get romantic partners to fill voids from our childhood, that we start to regain our power. In these dynamics of favouritism, affairs put the other party in a powerful ‘parent’ role where we play ‘child’ and assign this person too much power and authority. We end up perpetuating those wrongs from our past by selling us short when what we really need to do is begin the work of healing that part of us that’s still using that same reasoning we used in childhood to run our lives and inform our perspective. The great thing is that when we increase self-awareness and also get a fresh, adult perspective on our past, we begin to release so much of that pain we’ve held onto and free ourselves up to truly love and be loved.

If you want to uncover and transform unhealthy beliefs as well as work through feelings of anger, sadness, and loss, check out the downloads section where you can sign up for the Unsent Letter Guide and Get Out Of Stuck email series. I also explore the subject of affairs in my book Mr Unavailable and the Fallback Girl.

You've Made More Progress Than You Think
My Guide to Being FWFs -Friends Who F*ck/Fumble aka F*ck Buddies
Stop Explaining. Stop Justifying. Stop Talking. Boundaries Are Upheld With Action