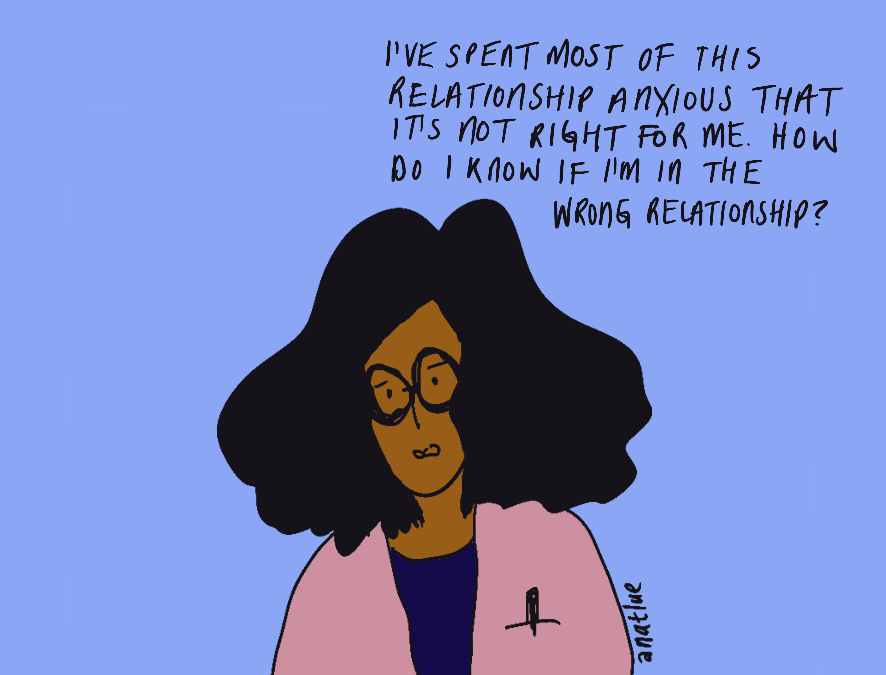 1. You’re using this person and the relationship as a distraction from yourself, other problems, or the need to commit to what you really want. Unless you’re going to confront what you’re avoiding, your hidden agenda will compromise you and the relationship.

2. Your fear of being alone exceeds any unhappiness being experienced in the relationship. In fact, more time may have been spent fighting for the relationship than actually being in it. You’re miserable more than you’re happy, but you’re also staying in the relationship for the wrong reasons. Stay because you want to and it’s right for the both of you, not because you’re afraid to be somewhere else.

3. As a result of your involvement in the relationship, you are unable to function in other areas of your life. Genuinely loving (and healthy) relationships aren’t isolating or destabilising; they make you more, not less, of who you really are.

4. You’re tolerating sub-par or outrageous behaviour. If you’d almost rather accept crumbs or mistreatment rather than create healthier boundaries, this isn’t the right relationship for you. If being in this relationship means you have to repeatedly ignore and distrust your needs, desires, expectations, feelings and opinions, choose yourself.

5. A part of you relies on making the relationship insecure and imbalanced. All humans have their insecurities and plenty feel rattled by the growing intimacy of a relationship. However, if no matter how much time goes by, you can’t behave in a trusting manner and stop throwing the relationship under a bus at the first sign of imperfection or conflict or stop setting tests for this person to prove themselves, this isn’t a mutually fulfilling relationship.

6. Engaging with your romantic partner and being in this relationship has triggered you into a child role. You treat and regard this person as an authority figure, a parental replacement, which is very unhealthy boundaries.

Once you’re in a child role, it’s not a mutually fulfilling, loving romantic relationship; it’s a do-over of childhood relationships in an attempt to meet old unmet needs.

7. You know that the feelings aren’t there and/or that you’re not right for each other in the long term. You’re incompatible. It might be that you keep rationalising staying by thinking about ‘good’ and ‘bad points’ or how you ‘should’ want to be with someone like them. No one wants to be on the receiving end of feeling as if you have to convince and cajole yourself into being with them when they’ve already made up their mind. By continuing to hold onto the relationship, you’re blocking the both of you from being in a more befitting relationship.

10. You’re like a dog in a manger. You stay in the relationship, not because it’s mutually fulfilling but to prevent this person from being with someone else and moving onto a more loving relationship. On some level, you know you don’t want to or can’t commit or even that you’re ‘done’ with this person but you don’t want somebody else to ‘have them’. Or, you stay because they’re a source of attention and affection and so they suit your purposes.

11. You don’t want to make future plans or truly share yourself. Or they don’t. Emotional availability and intimacy are about being emotionally giving and generous. If you (or they) have one foot out the door or are closed off, you’re being stingy with yourself.

Our relationships help us to heal, grow and learn by giving us a window into what we need. A breakup doesn’t equal failure. Listening to ourselves is something that takes practice and self-trust. Ultimately, we always know we’re in the wrong relationship when to remain in it means compromising ourselves.

Podcast Ep. 107: Getting Grounded About Intuition and Anxiety
Podcast Ep. 139: The Baggage Behind Your Break-Up Habits
Coping With and Moving On After a Break Up Commandment 8: Thou need to get a life