Carting excess baggage around puts the past on repeat. Offload, repack, reclaim. 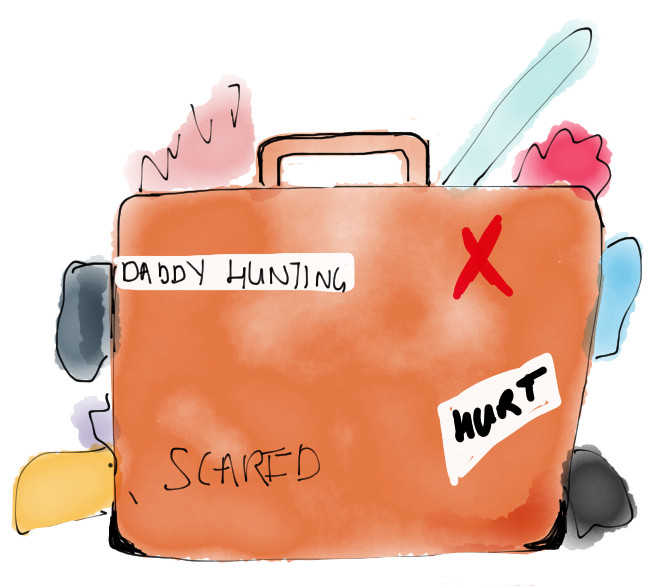 Before I faced up to how I felt about my childhood, my relationships, and ultimately the way I truly felt about me as a result of these and any choices I was making in adulthood, I’d be asked about what I was looking for in a relationship and respond with wisecracks, regaling whoever it was with tales of shadiness and unavailability. My past was very much in my present and because I didn’t really know who I was and what I ultimately needed, wanted, and expected within a relationship, instead of articulating who I was and my hopes and aspirations, I would speak about what really represented my pain and in some respects, my nightmares. And really, how could I expect to move forward when I was so immersed in my past – living it, thinking about it, going out with variations of my parents, trying to right the wrongs of the past, holding onto hurt and even grudges plus believing that I was experiencing an extended run of bad luck and that something ‘about me’ was provoking everything that wasn’t right about my life?

If the past keeps calling your attentions and efforts, it prevents you from enjoying the present and moving forward.

You don’t experience ‘now’ and the future isn’t something that’s regarded as unwritten because you veer between predicting doom based on the past or speculating about whether you can make the past different in the future. The past dominates. Until it’s put into a healthy perspective where you can live in your present, you just end up feeling disappointed because the past keeps showing up in your thoughts and actions which of course affects your beliefs and your choices and so round and round you go on The Disappointment Cycle. Let’s also not forget that life keeps throwing similar lessons your way via your experiences, if you’re using the same thinking and actions. You move on from a lesson when you truly learn and heed it.

My takeaway lessons tended to be centered on my worth (‘I’m not good enough’) and homing in on a few things in the relationship, which looking back, while there’s no doubt that these were factors, my focusing on these, distorted the thinking behind subsequent choices especially because focusing on certain points about a person whether they’re good or bad reduces a person from being a whole while also giving the impression that these points tell the whole story.

If I thought that I’d been ‘too outgoing’ in one relationship, the next time I’d try to water me down… only I wouldn’t recognise me anymore. The net result was the same – I wasn’t being myself in either of these relationships. I felt controlled in one relationship with a big age gap so next time I went out with someone who was younger and seemingly passive but who was actually quite passive aggressive so the net result was the same – jealousy, possessiveness, and actually, Yet Another Toxic Relationship.

It’s The (Polar) Opposites Game. You try to escape the thing you focus on and wind up with the same thing or even worse even if it feels as if you chose someone really different. Different qualities and characteristics (or assumed there were), similar dynamic.

It’s like going, ‘My last ex drank too much so I’ll be with a teetotaler’ but that doesn’t mean that you couldn’t end up being in a similar unhealthy dynamic. Take it from someone who has tried out each type of unavailable relationship for size…. ‘My last ex didn’t call very much so this time I’m going to prioritise getting someone who calls’. While calling is good, it’s not the whole picture. ‘My last ex didn’t want to do enough exciting things in bed so this time I’m going to be with someone who’s wild in bed.’ That doesn’t mean that the relationship will be better; it’ll be sexier.

Let’s be real, many people have shagged around or had an emotional affair with The Person Who Understands Me Better Than My Existing Partner TM, behind their partner’s backs…and yet not left that relationship or been in for a short, sharp surprise that what they’d focused on to the exclusion of . It’s because neither is the solution to their own avoidance and lack of self-awareness about what they need, expect, and want in a relationship, as well as where they also need to step up for themselves.

One of the things that you become more aware of when your own thinking, actions, and choices are rooted in healthy self-awareness including knowing your values and what you need to experience to know that you’re in a mutually fulfilling relationship with all of the ‘landmarks’, is that unless you lack self-awareness and are even in denial about your own contribution to relationships, out of respect for each partner, you don’t choose partners based on what one has versus what one doesn’t.

When we enter into relationships in the present, we are self-aware enough to get a reading on our feelings and to ensure that we’re ultimately stepping up for ourselves. If we choose partners based primarily on being past-focused, not only does it become about comparing instead of the merit of the relationship and what we want, need, and hope for right now and going forward, but it can also result in us not truly learning from our experiences. We have to evaluate and process how something has affected us and this does take a willingness to have an honest conversation with ourselves and to have enough self-compassion and good boundaries to not focus on blame and to instead focus on taking away growth lessons from these experiences so that we can move forward. We don’t forget the past but it becomes about being here now and talking about what we do want and need as a representation of who we are, not as a response to pain we continue to be in. I used to cart a lot of baggage around with me but it was offloading the excessive baggage, the pain, the distorted stuff, and repacking while ‘reclaiming’ myself, that was freeing.

Don't scratch the loneliness 'itch' with the wrong scratcher
Holding on to the illusion: Are you emotionally lazy?
We must stop caring too much for those who care too little for us