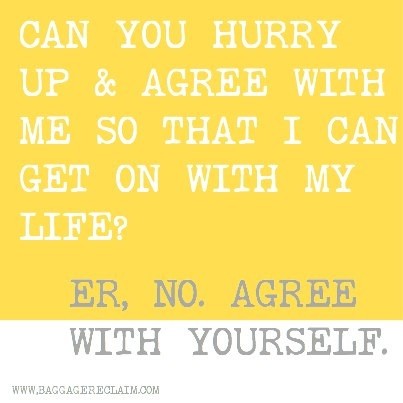 Forgiveness and closure is something that many struggle with, often because it feels like any other parties involved ‘need’ to be in agreement about our perception of things and to acknowledge where they’ve gone wrong. When there are unanswered questions or a vacuum where they existed either because they’ve disappeared, moved on, or passed away, and it feels like they just don’t get why we’re so angry/hurt and unable to move on, it can feel like we’ll never get past it.

What I discovered about forgiveness and closure recently, is that you definitely don’t need to gain agreement from the other party about your perspective on things and that your own acknowledgement and validation travels a hell of a long way.

You move on when you stop invalidating yourself.

It’s a decision – it’s a choice between being in the pursuit of, in some cases, a lobotomy and a personality transplant, or processing your feelings and supporting you, including not blaming yourself for other people’s behaviour.

In the month before my wedding, everything I’d put behind me about my relationship with my father – the first Mr Unavailable in my life – was severely put to the test when we had massive falling out (we’ll save that story for another day). Why? Because it became apparent as the clash unfolded that me being ‘easy going’ and seemingly ‘forgiving’ had been taken for granted or misinterpreted as permission to press the Reset Button.

We’ve had an OK relationship but in recent years, as my unwillingness to allow hot and cold, Future Faking and disappointments to happen became apparent, distance has grown between us. I’d be lying if I said it hadn’t bothered me initially (you may remember that I addressed my disappointment a few years ago) but I’ve found that expecting people to be different from who they’ve consistently shown themselves to be is a great source of unhappiness that I’d rather forgo.

It’s easy to get comfortable and sucked in by the warmth of a ‘hot phase’ and then fall into the old trap of thinkingThings will be different this time. You may think enough time has passed for you not to be affected and then you get hurt when old dynamics are revisited.

I know that I am not alone in having been affected by the behaviour and/or absence of one or both parents. I’ve read and heard so many stories that I know if you had an absent or very emotionally distant father, or a highly critical mother, or over arching parents who didn’t chip in much emotion but expected you to live up to high standards, or were witness to or experienced physical abuse, or were emotionally abused, or were treated as if your feelings and needs were not important and the list goes on, you are highly likely to have not only been in unavailable relationships, but you’ll no doubt have self-esteem issues and possibly perfectionist issues.

There was a time when I had little self-worth and was very much emotionally parked at June 1983 when I felt that my father abandoned me and I used that to judge me and form some unhealthy beliefs about relationships, love, and myself. I realised recently that I have no memories of my parents being together and that many of my memories are of waiting around, being ecstatic to get some attention, or of being disappointed that he hadn’t shown up…even if we’d flown thousands of miles. Yet I idolised him.

I did exactly the same thing in my relationships which was why crumbs felt so normal.

When we had the fallout, I realised why I felt so infuriated: I’d moved on, sorted out my self-esteem, had done my best to include him in my life but it felt like a slap in the face to hear talk that sounded like history being rewritten and even denial of how things were. It was like taking an anger match and some oil and chucking them on embers that had died out. I.Was.Furious. And incredibly hurt.

You see the thing is, it is downright infuriating to deal with something and then feel like it’s been thrown in your face or even that it was in vain because the person hasn’t changed or they’ve reverted back to the very behaviour that they know you took issue with, but then I remembered something:

I didn’t let go and focus on me and my own life on the basis that he changed or was even in acknowledgement of his actions, or in agreement with my perspective. ; ;

That would have made my endeavours conditional because quite frankly, each time he got on my tits and disappointed me, I’d have been plunged into despair again.

I’ve never said “I forgive you” because it wasn’t really necessary. You can say these words but the truth is, there’s a damn good possibility that nothing will change and then it’s like “Oh but I said that I forgave them. Why aren’t the heavens opening, the angels singing, and my pain disappearing?”

Forgiveness is about the decision to let go. After you make the decision, you have to honour it with the actions to support it. But sometimes we don’t consciously say “I let go” and instead, we get on with the business of living, we nurture ourselves, we process our thoughts, feel all of our feelings even when they hurt, and one day we realise that we feel less about something than we did before and are in the process of letting go or have let go.

Whichever route you take, the point is to stop holding it so closely. If you keep staring at something, if you keep revisiting and reliving it, if you don’t work through the feelings and gradually start to draw conclusions and learn from the insights gained, it just mushrooms into something that drowns out perspective.

It was actually more important to forgive myself and I did this by starting to treat me like a worthwhile and valuable person instead of withholding love, care, trust, and respect and being my worst critic.

Letting go is about deciding to be ‘done’ with something no matter how much more information or change you could continue to seek. It’s not that my father couldn’t do with changing but seven years ago, I had to ask myself why I was devoting my life to expecting him to change, feeling bad about the fact that he hadn’t, and putting my own progress on hold in the process?

The trap of course that many fall into is making the external actions and thinking of another person a condition of moving on and letting go. That’s why I’ve had some readers tell me “I can’t move on until I get the answers that I need / they show remorse”, which is like proclamation of a stalemate. It leaves them with nowhere to go as it’s out of their hands. It’s also not ‘can’t ‘- you can’t know that you can’t move on in advance of it. Seizing onto the condition creates an obstacle.

While it would be nice to gain agreement on how we see things, to get our feelings validated, and to get acknowledgement of where they have erred, not getting them doesn’t have to be an almighty barrier. You’ve got to learn to trust your own eyes, ears, judgement etc. Sometimes you’ve got to hurl it into a bucket and chuck it into the universe and let things fall where they will fall. And you get up, hug yourself a bit tighter and you do your absolute best to get on with your life and treat you well.

The funny thing is that my father thinks I’m not OK with him because I won’t agree with the illusion whereas it’s actually that I am OK because I’m in reality. We can coexist with our differences.

And the even funnier thing I’ve learned from reading / listening to countless stories is that we do often choose to let someone back into our lives and to let something go because we think or assume that they ‘get it’ – but often they don’t ‘get it’ in the way that we want them to and it subsequently becomes apparent in their actions, which means that a lot of us letting go and moving on is really about how we feel about us and how we deal with something in our minds. That tells us that we are in a lot more control of how we can continue to feel than we realise and that is incredibly freeing when we embrace the value of this.

Advice: Help! He Disappears, Doesn’t Call, Pops Up Every Fortnight and Gives Me a Magical Time. Is H...
We need to talk about "selfish"
Podcast Ep.23: Name-Calling In Arguments?, Why I Find Affirmations Beneficial (& You Can Too!)
Share this...