“Charming” tends to be a precursor to code red problems 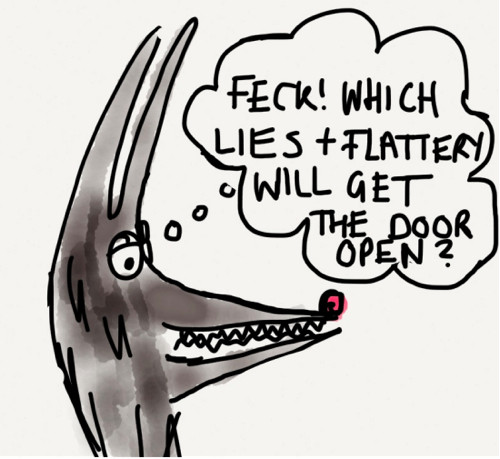 Each and every time someone shares a story with me where the object of their affections (and their pain) is described as “charming”, I already know the rest of the story without them having to utter another word. My spidey senses go “O-oh!” and I know that the rest of the story’s going to be a rollercoaster of pain where much of the relationship is going to be about chasing the beginning (when there was Fast Forwarding and Future Faking) and also about recouping the validation, adoration, and intensity that they get when the charm offensive is switched on. There’s also likely to be assertions that this person is narcissistically inclined or an actual narcissist.

You see, when we truly know a person and we also appreciate them for more than what amount to superficial qualities, we’ll go beyond charming, attractive, good sense of humour, popular with people or good at their job.

If we’re claiming that a person is “charming” and we’re still describing them in this way even after the chaos and their true self has unfolded, we don’t know him/her anywhere nearly as well we believe and we’re very attracted to certain qualities that we feel make a person ‘likeable’, even if over time, they don’t consistently present these qualities and characteristics in the relationship. We’re in admiration of this person, likely latching onto certain personality traits, seeming capabilities, and their physical and social appearance, so how they look and or how they appear in a social context. They’re on a pedestal.

This “charm” that we refer to, is what provides a rather large clue as to why we’re under their spell and why they have the ability to get us to do what they want whether we’re still with them or broken up and trying to move on.

Actively “charming” people are practiced at saying and doing the things that present them in a certain way but that also get the best out of people so that they can benefit from the compliance and adoration that the flattery and let’s face it, the performing, yields them.

There’s a big difference between somebody who as a result of being authentic, they come across as a really enjoyable person, whether it’s in a brief interaction or over a consistent period of time, and somebody who actively seeks to use their charm in order to gain an advantage where they may even be able to run rings around them with  effery.

Somebody who is a genuinely lovely person who you’ve gotten to know over time, isn’t going to drain you out and suck you dry. Unfortunately, people who are stuck on somebody they regard as charming, end up having less self-esteem than what they entered into the relationship with, and also feel as if they’re broken due to this person withdrawing their attentions and affections, or even ‘chopping’ them down with their behaviour and comments.

Actively charming people know how to cover up their true agendas and mask their inadequacies by heaping on the praise. We’re highly likely to be taken in by a charming person when we don’t see ourselves as whole and judge us on perceived past mistakes, faults, flaws etc, because we won’t see the charmer as a whole either.

When we’ve experienced an excessive amount of criticism in childhood (or we perceive certain experiences as a criticism of us), we tend to gravitate to people who are charming. We’ll be highly responsive to praise because it’s the whole being given a cracker after not eating for six months in the desert. A charmer speaks to that part of us that looks for validation and approval, which in turn activates our pleaser, and as they heap on the praise and we no doubt feel flattered to be basking in their presence (because you know we’ve built them up as if they’re The Best Person That Ever Did Walk The Earth TM), we want to influence their behaviour and feelings even more by being pleasing (read: compliant and putting them before us). We make the mistake of believing that we will be safe with this person (which is like nesting with a python), because in our minds, we’re blowing smoke up their arse and putting them before us – what’s not to like?

On some level, because we’re attracted to these traits and qualities in the first place, we sense that a person like this has the power to destabilise us by invalidating us in some way, expressing some level of disapproval, or just withdrawing their attentions and affections now that they feel thoroughly in control.

Unfortunately that willingness to please becomes the thing that they disrespect us for. It’s like, “Lemme build you up so that your admiration veins are nice and juicy, suck you dry, chop you down before you see what I’m about, and then get mad at you for not having anything left for me to suck on…. So I’ll discard you for a bit, let you get a bit more confused admiration and fear in your veins, go and bleed someone else in my harem and then pop back to you for a top-up….”

All of the feelings of fear and inadequacy kick in and it’s, Here we go again! because truth be told, even if it was unconscious, we were trying to right the wrongs of the past in some way. The charming person is representative of someone from our past and when they [the charmer] builds us up and chops us down, it resurrects old wounds.

After hearing thousands of stories, being destabilised by a charmer is akin to the pain of having an exacting, highly critical and even narcissistic parent or caregiver. If we’ve been raised by an unpleasable and we’re still trying to please them via our adult involvements even if it’s unconsciously through a toxic pattern, we’ll then try to find a reason that ‘makes sense’ and then home in on the belief that what has happened is due to us being inadequate and unlovable, because it’s what we’ve always taught ourselves in these situations. It will feel like ‘home’ – familiar territory. We’ll think that because we felt this way before that it has to be us when it’s more that we’re engaging in a similar dynamic and repeating a pattern. We’ll wonder what we did wrong to cause the withdrawal of affections and attentions or for us to even be replaced.

A charmer’s attentions and affections, particularly after they’ve been withdrawn or there’s been the threat of it, seem more ‘valuable’ because when we’re raised by people who make us jump through hoops for love, care, trust, and respect, we learn to only value ‘love’ from people who find it hard or even impossible to put out. Somebody who doesn’t have a shady agenda and doesn’t make us jump through hoops, will feel ‘wrong’ while being dicked around will feel ‘right’.

Truly healthy relationships go a lot deeper than charm and aren’t reliant on being disarmed and us having to sacrifice ourselves for the other party to feel big. When we mend our relationship with us by addressing the effect of feeling inadequate as a child and blaming ourselves for other people’s behaviour, we stop basing our lives around fear of making a mistake and being judged, which means that not only will we allow ourselves to be vulnerable so that we can have deeper relationships, but we won’t be taken in by somebody who relies on charm to prevent depth.

When we start being kinder to ourselves and work on healing those parts of us that ‘activate’ our still wounded younger self, no one can come along and showboat with their megawatt flattery because we won’t be waiting for somebody to come along and give us praise, attention and even permission to have an existence. We won’t be trying to fill a parental void with a romantic partner or putting the past on repeat by trying to right the wrongs of the past and prove that we’re enough to some fly-by-night or cruel person, when we are already more than enough. “Charming” tends to be a precursor to code red problems – don’t ignore the reality of what is going on because ultimately, charm can only cover that up for so long.

PS I’ve been meaning to do it for ages but my February and March appearances on Ridge Radio are now on Soundcloud. I will be on tomorrow evening from 7.15pm GMT so do send in your questions to studio AT ridgeradio.co.uk Listen in live from wherever you online are at Ridge Radio.

Podcast Ep. 39: Were They All 'The One'?, Graduation Goggles, Allowing You To Take Time Off
Don't conflate common interests with character and shared core values
You're not going to crazy-make me! Why I won't be making sense out of nonsense and you shouldn't eit...