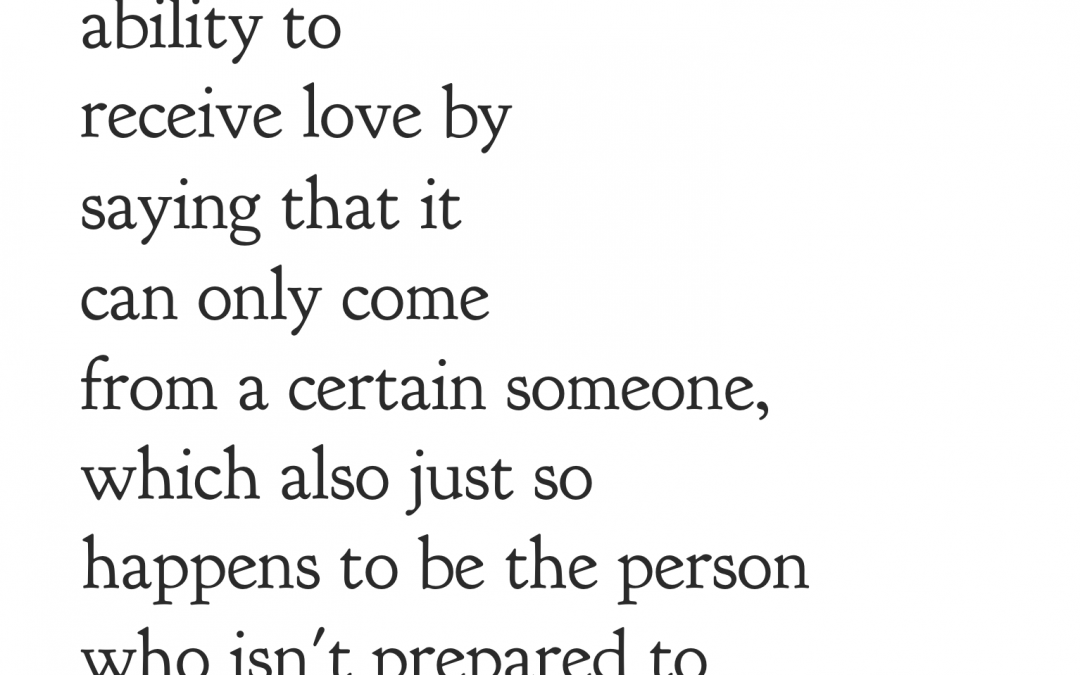 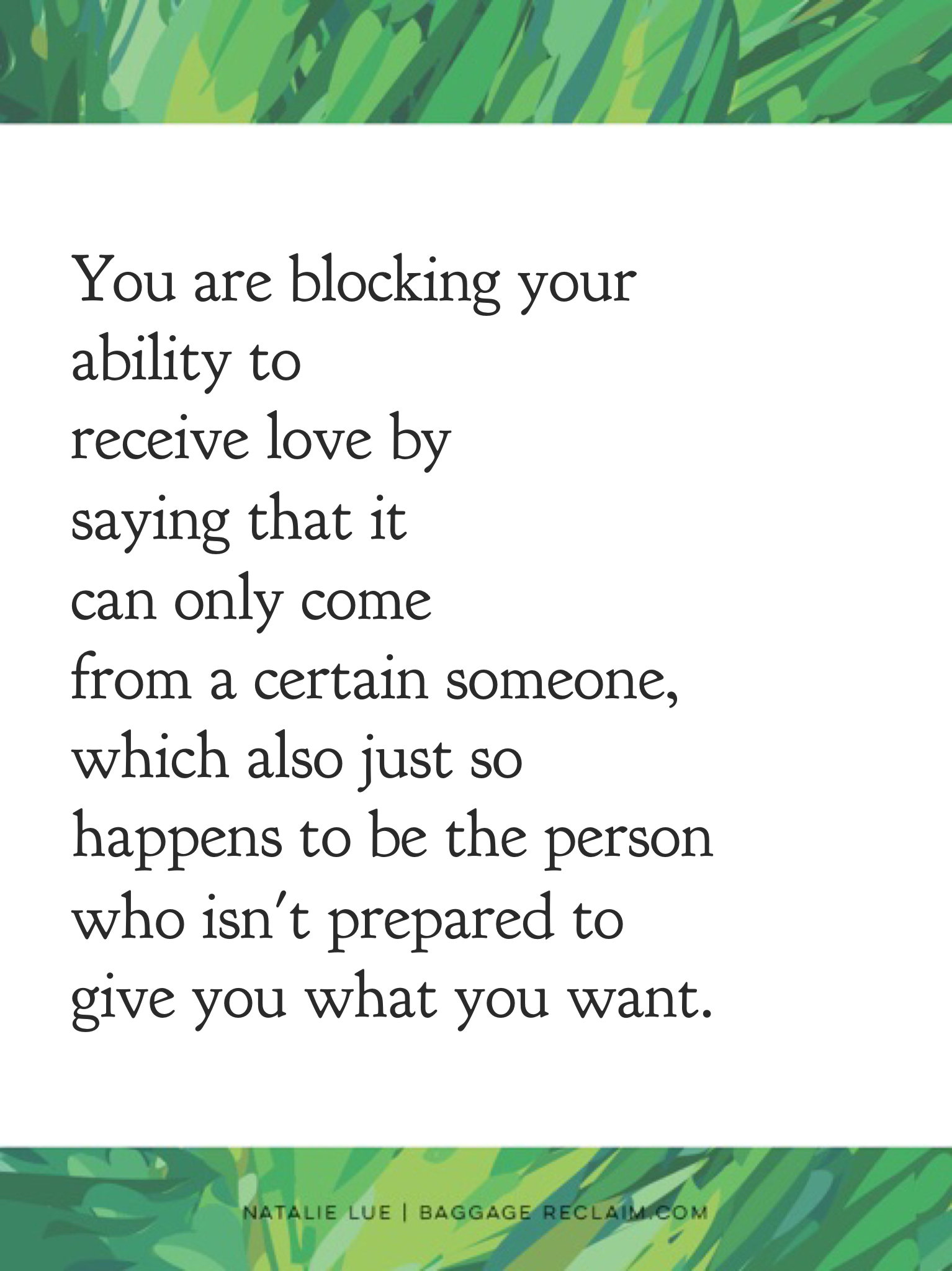 “Natalie, I am sooooo ready to be in a relationship and settle down. I can’t [whatever they’re currently doing and suffering through] anymore.”

I hear variations of this statement sooooo much, sometimes from the same people multiple times over several months or even years, and it’s often after sharing their dissatisfaction, frustration and even despair over what is currently happening in their lives.

It’s not just that they’re not in the relationship they want; there is invariably something else in the mix that’s a major pull on their time, energy, efforts and emotions.

They’re obsessing over an ex who, based on how the relationship was, along with any medium to long-term incompatibilities, it’s the right thing that the relationship ended. They’re often also stuck on The Replacement Mentality, so believing that they’ve been replaced by someone ‘inferior’ or similar, or believing that this person is living ‘happily ever after’ with The Replacement, even though this is made up or exaggerated, especially when this same ex is messaging/sexting them and/or complaining about The Replacement [to them]. If they’re not obsessing over being replaced, it’s often about experiencing activation and so not recognising how it has triggered feelings and wounds from the past and as such, this notion of being abandoned, passed over and rejected in totality – receiving no, the relationship ending, not getting what they want etc., is seen as being a rejection of them in their entirety, full stop.

Some have been what I call ‘single on the surface’, so yes, they’re technically single but at the same time, they’re either in some form of purgatory over something from the past and so, in effect, in a relationship with pain, fear, guilt and whoever the person or people are that are connected to the events, or, they are unaware of a set of habits that are part of their safety mechanism to defend against intimacy. Whatever they’re doing, it can amount to going through the motions while subconsciously (and in some cases, very consciously) sabotaging their own efforts. One of the easiest ways to do this is to be drawn to the same type of people, whether it’s on or offline, and to go through a similar habit loop each time which eventually leads to disappointment, and then lather, rinse, repeat.

They’ve been in a vague, ambiguous, ambivalent, indecisive setup with somebody for months or even years, and actually in a few cases, decades. For some, they repeatedly accept vague, ambiguous etc setups because they want to play it cool / not appear ‘too needy’ / not appear to create drama like they think that ‘others’ do. Some play the Really Good Friend role as a back door route to a relationship, only to be told that the other party doesn’t see them in ‘that way’, or only wants to ‘go with the [casual] flow’, or that they’re interested in someone else.

Some have been breaking up and getting back together with somebody for an extended period of time and there’s often enough drama and betrayal to fill an entire series of the now defunct Jerry Springer Show.

All of these situations are understandably frustrating, disheartening, and enough to sap so much life force out of you, that even if a loving relationship appeared before your eyes, you would barely be able to move let alone step into it, but–and there is a big but—it’s at times like this when we say we really want something but it’s not happening, that we have to be willing to own and know our own bullshit.

We have to be willing to acknowledge our blind spots.

We have to be willing to let go of a story, a version of events that might have been keeping us company, albeit uncomfortably, for what may be all or the majority of our life.

Incidentally, this is some scary but necessary and liberating work on our part.

This also means that we have to be willing to let go of the side benefits of continuing as we have been, which for example can be:

We have to be willing to let what we want be bigger than what we’re afraid of. It’s where change happens.

This is why when I talk with people who are insistent that they want a loving, committed relationship but the reality, including the pattern is altogether different, that I sometimes have to say:

I hear you but I’ll know that you know that you really truly do, when you stop chasing after or letting the ex back in (or whatever it is they’re doing).

Until we are willing to stop whatever we have consistently been thinking, feeling and doing up until that point that has facilitated our current and past position, we are stuck in our uncomfortable comfort zone.

So, take me for example: I said I wanted a relationship (and I did) but I also wanted this so-called relationship to come from a Mr Unavailable who either would be unwilling to participate in a committed relationship, or who would make out like they were but then I would accept less than love, care, trust and respect. It was a total blind spot. I thought that the more I sacrificed via people pleasing is the more likely I would be to get what I want. What it hadn’t occurred to me to ask myself was whether I was doing the equivalent of going to McDonalds and asking them to give me a Michelin star meal and experience. I was then accepting the McDonalds meal while doing what I thought would get me the Michelin meal, never acknowledging that I was literally in the wrong place.

What I also had to acknowledge was that yes, these were involvements with less than love, care, trust and respect, but that it wasn’t just about their availability but also mine.

If I was willing to interact at that level, that was my level and if I really wanted more, I had to be willing to take me to new places.

Sure, it might have been like Cheers, where everybody knew my name – Fallback Girl including Yo-Yo Girl, The Other Woman and Florence Nightingale – but where I was headed to, I could make a choice to be, well, myself.

It is one thing to note that someone isn’t emotionally available but it’s another thing altogether when you acknowledge that you wanted to paddle around in the shallow end because it’s where you felt safest from intimacy and change.

If you want to be in a mutually fulfilling loving relationship, let that be your focus, not being in relationship with a specific person who is at odds with your professed desire.

Once you lose attachment to things going down in exactly the way that you pictured and instead you focus on your values, how you want to feel, and basically showing up for what you want, you’re available for something different.

If, for example, you say that you want a relationship but your concept of a relationship is you winning over Ben who keeps telling and/or showing you that he’s not the one for you and that you can and really need to do better, you are closing down all other avenues.

You are stopping you from being shown another way.

You are keeping you out of the relationship you say that you want.

You’re attached to the idea of that person giving you the love, often without fully acknowledging the baggage behind you thinking that it has to be them or someone like them, but as a result, you’re not actually attached to being in a loving relationship.

Your plan isn’t the plan.

That means that no matter how much you try to control things, your schedule is not the schedule but also, the things you want might not show up in the exact package you’ve designed.

It’s like going, ‘I can only have real money and freedom by winning the lottery’ and then poo-pooing everything that isn’t a lottery win.

You have to be open to overwriting the truth as you’ve been seeing it.

You have to open to letting go of attachments to ideas, expectations and desires materialising in a specific form.

If you decide that you want a car that is of a certain speed, value, quality etc., that’s different to requesting that the same car has to be gotten from a certain someone, despite the fact that he/she either doesn’t have the car or even if they do, they have no desire to part with or share it.

[Compassionately] acknowledging your blind spots and where you’ve gotten stuck, is about closing the gap between who you say you are, what you want etc and what you actually do, including the situations you get involved in – this is something I recently spoke about in my intro to season 3 of the podcast.

Identify that someone or something that is a major pull on your time, energy, efforts and emotions and ask yourself: Why do I have to keep doing things or engaging with this person, in the way that I have been doing so far?

That will immediately throw up a load of ‘because’ and ‘should’, along with fear via your inner critic, and this helps you to bring your pattern into your awareness. It also reveals the fake rules.

If it’s not making you genuinely happy, question why you’re approaching it in that way. Who said it has to be this way?

If it’s only you or a number of people – and yes, that includes your family but not the entire world – there’s plenty of wiggle room for you to figure out where you need to shift to something that’s more reflective of your needs and desires.

Also, keep in mind that us humans have a habit of blindly following family patterns, even though 1) they’re not making us happy but also 2) they haven’t exactly made our family all singing and all dancing.

Make sure you identify the ‘benefits’ of your current position – if they weren’t currently outweighing what you want, the blind spot wouldn’t exist. Make a list of your habits – the things that you think, feel and do around this blind spot and note the ones that are taking you towards a loving relationship, and the ones that are taking you away from it.

I Can’t Believe They Don’t Want Me Syndrome
Be Careful of Rushing to Date and Love Again - There's No Fire
Why Doesn't My Emotionally Unavailable Guy/Assclown See a Committed Relationship With Me?