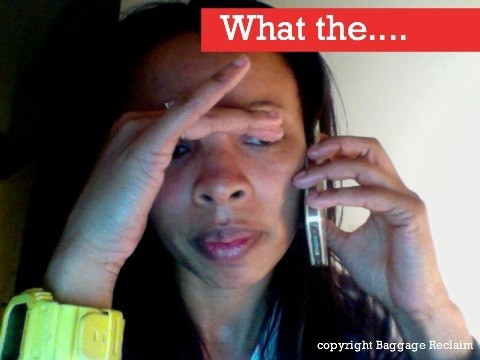 A few weeks ago, I shared with you about how buying my wedding dress had given me a crash course in commitment and chemistry. Well…a few weeks on, and attempting to get the wedding dress that I’ve paid for, has proven to be another crash course, this time in shadiness and doing right by yourself.

Always, always, always, listen to and trust your gut. Almost six weeks ago, I paid the deposit on my dress and in the twelve days that followed, I had to chase the designer about paying the balance and collecting my dress. Now bearing in mind that I was told I could collect it the following week, you can see why I started to feel a bit nervous. On three occasions I nearly sent a message saying that if she had changed her mind about selling the dress, fine, just fess up and gimme back my money! Each time I went to press send, I picked up the phone again..and went to voicemail. My gut said that I was going to be effed around. My gut was right.

Silence in a new relationship is never a good thing. This is especially the case when you 1) know that their phone isn’t broken and 2) see them on Twitter… Ever been out with someone who is blanking you but you can see that they’ve been on Facebook with their harem or surfing dating sites? Yeah, it’s infuriating.

Silence after you’ve got laid or handed over four figures in your hard earned cash is never a good thing. It’s not because the sex was so good that they lost their tongue; it’s that they’ve got what they want and also don’t want to give you the impression that it means more than it did. Likewise, when someone takes your frickin’ money, no matter how much it is, and then you don’t hear from them and you don’t know them, it doesn’t engender trust. What it does cause is anxiety and doubt.

People use silent treatment in relationships to manipulate you into the position that they want. It also controls the amount of communication when they ignore calls and only respond by text. Flush ’em fast and then cut them off.

If you have to chase down someone and basically make most of the effort, you’re going to get veeeerrry pissed off after a while. Do you know what’s really got on my tits over the past few weeks? During this whole debacle, I’ve felt like Natalie Lue, March-August 2005 when I dated Dot Dot Dot Man, the guy who triggered my epiphany about Mr Unavailables. After a hot start, I spent 4.5 months wondering when I would hear from him next and then trying to work out why hadn’t heard from him, and then planning to dump his bony behind, and then changing my mind. “Just give it one more week”, this time round became “She’s so busy, I’ll just give it a few more days…”

Nobody is that busy, even world leaders. They ain’t busy; they just think they can relegate you in level of importance and that you’ll accept it.

It doesn’t matter who someone is, whether it’s who they tell you they are, or who you think they are, you are never deserving of being disrespected and effed around. Ever. I buy a lot of stuff on recommendation, but even then, I still judge it on my experience. I dropped the ball this time because nobody recommended this woman but she does tout about being a celebrity stylist and yada yada yada. Next thing, I’m rationalising that surely this person wouldn’t screw me about. Er, what the what now?

Don’t let what you perceive someone’s status, appearance, popularity, intelligence or whatever, blind you to seeing their actions and hearing their words for what they are. Important, good looking, super-intelligent and whatever else people do screw up and can screw you over.

Avoidance creates very large problems. I’ve made excuses, denied, and rationalised with exes because it helped me maintain a very awkward status quo instead of making uncomfortable decisions. I really didn’t want to start a dress hunt again just like people stay in crap relationships because they don’t want to be single again, even though the crap relationship continues to take its toll. And I still have no dress.

You don’t have to act like a crazy person, but you know what? It’s more than OK to be angry, it’s even more than OK to lay it down, and you shouldn’t feel bad for chasing for goods that you’re owed, or standing up for yourself. I realised today, I have been too frickin’ nice about this and just like when you play doormat and you end up being a martyr, trying to be all nicey nice to trigger decency in another person is a crock, especially when playing the goody two shoes is not what’s needed; it’s owning your right to open your mouth and make your voice heard in the name of honouring yourself. You don’t have to rage or disrespect someone, but honesty with respect, even when you’re bloody annoyed or angry, is more than acceptable.

It’s time for you to stop pretending that you don’t get angry or trying to be all holier than thou so that you can claim the higher road.

Texts are the laziest form of communication. I don’t know what the frick is wrong with people, but communicating with customers via text is unprofessional and thinking that you can actually have a relationship primarily by text is delusional. In 40 days, I have never received a phone call, and prior to today, I’ve had two texts. TWO. TWO! Can you see me practically spitting feathers? I hear from readers who have spent months or YEARS being managed by text – I just don’t know how you do it, or at least I didn’t…until I was escalating the dispute with Paypal today and read back what I’d typed.

I could see it all there. All my effort. Me making all the calls, her returning none. How had I missed this? Because when you get caught up in this mind f*ckery, you go moment to moment. I was so focused on getting the dress and not being ripped off, I didn’t see it, just like many readers are focused on getting the validation or the commitment, while not recognising they have no foundation in the present. Hot tip – keep a list and a Feelings Diary.

Also avoiding conflict by using texts to ‘communicate’ is immature. Put on your big girls/boys pants and pick up the phone at least.

When someone refuses to acknowledge and accept the impact of their actions, recognise the difference in values and don’t bother trying to educate them. FLUSH!

Commitment is only commitment if each person holds up their end of things. It’s all very well me being committed to the dress, but if I don’t have it, I’m committed to hot air. Nuff said.

So where am I now? Well just like you’re typical shady relationship, now that I’ve raised a Paypal dispute and escalated it, she’s been in touch. By text. You’ll know this feeling well if you’ve ever ended it with someone who wouldn’t step up, only to suddenly be flavour of the month.

Check out my book and ebook Mr Unavailable and the Fallback Girl where you can lots more insight into shady relationships.

Advice: Can I keep it light with Mr Unavailable and bail out before I get hurt?
This isn't love: You're in pattern, they're in pattern
Is it love? Or is it fear, drama and pain?
Share this...