Fear of sacrifice, fear of commitment 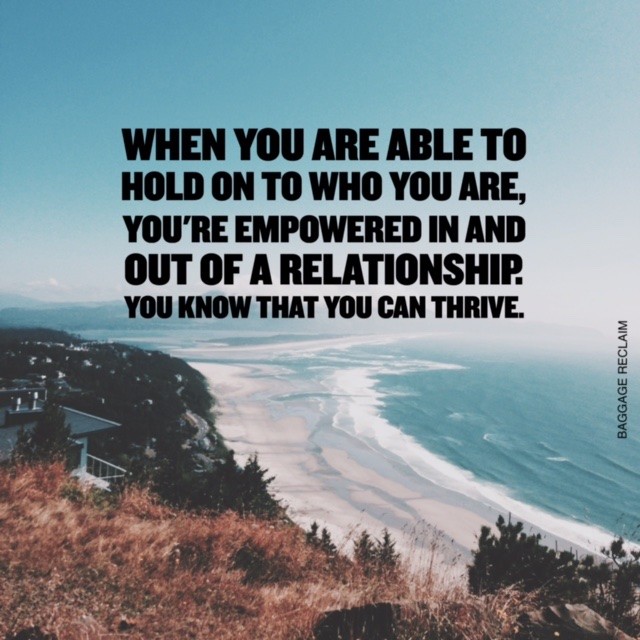 Over the last few months, I’ve been meeting readers at my workshops and there’s a really strong theme coming through: Sure, there are fears about not being “good enough” or even being cheated on or hurt, that are stumbling blocks that direct them into unhealthy and frustrating partnerings, but actually, many are on some level nervous and sometimes deeply afraid of sacrifice.

Now, it’s not that they’re ‘selfish’ and afraid of compromise—if anything, they tend to compromise themselves in their relationships—but more that they conflate relationships as a whole with unhealthy sacrifice.

Let’s clarify what sacrifice is in a relationship:

Every decision has trade-offs. If you decide to be in a committed relationship, the trade-off is that you go from feeling as if you have umpteen options or that there’s the possibility of a different partner, to co-creating a relationship.

To make a commitment requires you to make the decision even though you don’t know how it’s going to pan out or know every itty bitty detail of what it’s going to entail, hence the need for due diligence.

While it’s understandable to have moments of twitchiness because you’re human and will probably grapple with fear of uncertainty at times or maybe low self-confidence that causes you to self-doubt, especially if you’re a perfectionist (you will want everything to happen right now rather than being vulnerable and showing up), putting a lot of your energy into questioning a decision you’ve already made or conducting yourself (privately and also with your partner) in a way that isn’t congruent with the decision you claim to have made, is a recipe for pain and frustration. It’s ‘un-deciding’ and that brings out a whole different set of thinking and behaviour to when you are living up to your commitment.

Every relationship will require that both parties, not just one, makes sacrifices for the greater good of the relationship.

Typically, if you’re both on the same team rather than solo minded, you won’t notice these sacrifices because you’re enjoying what’s on the other side of them—something that’s mutually beneficial—but if these sacrifices are actually about compromising who you fundamentally are as a person (your core values) or are one-sided, then yeah, not only is that a problem but it makes sense why you would be scared of relationships.

Giving you up in relationships equals boundary issues.

Think: people pleasing, playing roles, overfunctioning and overcompensating, not addressing code amber and red behaviour, morphing, blending and adapting to suit whichever partner you’re with, and putting your partners on a pedestal by treating them as if they’re an authority over you and a parental replacement.

These habits not only guarantee pain but they also cut you off from intimacy–you can’t do these and be yourself and be vulnerable, which also cuts off commitment and the other landmarks of healthy relationships.

When you associate relationships with sacrifice, very often, it’s fear of loss of freedom and/or fear of loss of self, the irony being that to avoid sacrificing in this way, you procrastinate in an unavailable relationship where you can almost feel as if you’re a prisoner of your own fears and are playing a role where you’re anything but yourself.

It can appear as if you’re not only trying but damn near breaking your back in your relationships but it’s still avoidance. On some level, you will fear that committing will be cosigning to the painful future loss that your fears tell you is going to happen [and that your current relationship habits are acting as ‘protection’ for]. You’re making motions but you’re not having to commit.

In some instances, like an affair, a secret or fantasy relationship, or a casual arrangement, these feel especially safe albeit uncomfortable to some or even a large degree, because the exposure to sacrifice is limited by the relationship. Sure, if you’re, for instance, in an affair, you might make much noise about how you want to be legit and how you’re sick and tired of waiting for them to leave or make a decision—but it’s precisely because you don’t have to be ‘all in’ in the truest sense why you’re involved with somebody who has a partner/spouse in the first place.

If you on some level fear that being in a relationship is going to result in sacrificing you or that being vulnerable is going to result in sacrificing you, it’s because you’ve either witnessed this in key relationships in your life and vowed, “I’m never going to put myself in the same situation as my mother/father/whoever it was”, and/or you’ve been sacrificing you in your relationships (because you believe that this is something that you have to do because the other person is seen as more important/valuable and are trying to create a tipping point of reciprocation so you can increase self-worth) and each hurt is feeding the fears and also renewing the vow that you’ll never put you ‘back there’ again, ‘back there’ being the source of the original hurt that set the stage for this pattern of sacrifice.

You will also sacrifice the things that you truly want, need, and desire because you’re catering to these fears and forgetting who you truly are.

It’s also critical to note that any relationship where the other party expects you to give you up as a way of ‘proving’ your love and making them more important, is a relationship to run in the opposite direction from, FAST.

If you recognise that you have this fear of sacrifice /fear of commitment, recognising its origins is the beginning of using awareness to break that pattern and to work through anything that needs some healing attention. An easy starting point is: Who taught me that this is what relationships look and feel like? Who or what taught me to be afraid?

For example, fear of losing a career or being trapped in a loveless marriage, has been a huge theme for many I’ve spoken with, and it’s because they had a parent scaring the bejaysus out of them about being ‘trapped’ by a partner—“Don’t make the mistakes that I did!”–or who emphasised how their unhappiness with their own lives is because they “gave up everything” for their partner/spouse. I think one of the things that we forget is that our parents’ relationships were made in a different time. Using the broad brushstrokes of their fears to guide our lives, only keeps us stuck in the past especially because we’re not them and we don’t have to make the same decisions to show ‘loyalty’ or avoid making any decision (but still get to be ‘loyal’) by avoiding commitment.

So examine where your story of relationships are about sacrifice came from. Ask you questions, examine your family connections or your relationship history and see where you can rewrite that story and address any old hurts that are presenting themselves in your current relationship habits, because it’s not worth sacrificing your life and hurting you, just to keep old stories in play.

Ultimately, the real sacrifice that you have to make is giving up the value of the protection that these beliefs and stories give you (hiding out) for something more valuable and important to you (your true self and the relationship you want).

My Unsent Letter Guide is great for uncovering old wounds and using writing out your feelings to gain perspective and begin healing–you can download yours for free here.

If you would like to know what’s really behind your relationship habits and want to learn how to date and be in relationships from a place of love, care, trust and respect, check out my course, The Breakthrough.

Building habits challenges our identity. We're capable of more than we think.
I'm Not Good Enough - The world through a low self-esteem lens
What are you afraid of? Worry & Holding Yourself Back
Share this...