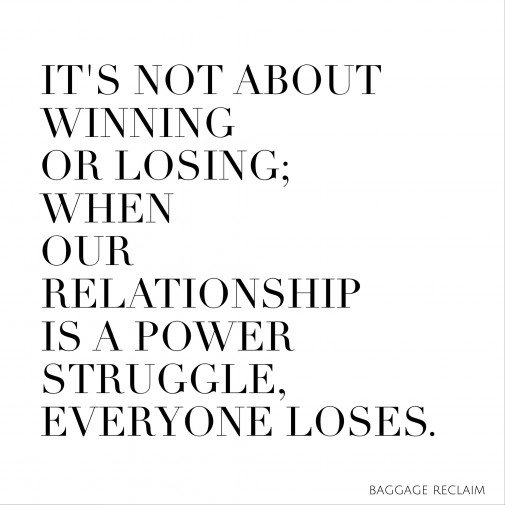 One of the very real concerns that we have once the honeymoon phase begins to fade or we abruptly come face to face with real life and normality where we discover that the other party isn’t “perfect” or that we have to learn how to communicate, be vulnerable and deal with life’s inevitables (conflict, criticism, disappointment and receiving no), is worrying about whether this person is going to be able to do things in the way that we need, want and expect. There can also be this fear that they might expect us to do things ‘their way’. We might wonder, What if I have to be vulnerable by being open to allowing this person to get to know me (and me them) and in essence, showing up in this relationship? This all feels a bit too risky. It feels like unknown territory and on some level, we fear that if we don’t ‘manage’ things that we will be opening ourselves up to being someone or doing something that reminds us of a painful part of our past that we don’t want to go back to. If we are very reliant on being in control, even if it’s pseudo control, we will enter into what boils down to a power struggle where it becomes about one of us conceding to the other.

We know that not only do we not want to go ‘back there’ but that we’re also afraid of stepping outside of our comfort zone by engaging with the person from a place of vulnerability and building a relationship. Compromise? Pah! What if I compromise and they’re screwing me over or they screw me over at some other point?

The funny thing is that we try to act all cool in the honeymoon period but once things start getting real, which can be signaled by us feeling afraid of normality or things developing, we start to clamp down and dig our heels in. I know I’ve been all nice and non-confrontational but you do know that you need to do things in the way that I expect (even though I might not directly express it) because this is how I feel safe and validated, right?

What if ‘their way’, i.e. outside of our comfort zone, rules and predictions, will hurt us?

What we need to acknowledge when we get into a fight for supremacy is that that’s not a relationship; that’s all ego. We’re fighting for that person to have our needs met while at the same time being resistant to doing things ‘their way’ because if we are entirely honest with ourselves, we see ‘their way’ whether it is an accurate assessment or not, as being reflective of the behaviour of someone from our past, likely a parent/caregiver, or a sibling, bully, or someone else who did not meet our needs. Our perception of ‘their way’ may be based on conscious or subconscious recognition that we are engaging with our ‘type’ and/or that we are recreating a pattern of a situation in attempt to be right this time.

We want to right the wrongs of the past.

If we can ‘make’ him/her do what we want, we think that we can correct the past and close up the void of those unmet needs and all of that critical narrative that we’ve been bludgeoning us with. The more that they passive aggressively or aggressively push for ‘their way’ and the more that we go in our own mode of people pleasing, passive aggression or even aggression to swing things ‘our way’, is the more that we feel afraid.

Their actions as well as our feelings, thoughts and actions, are familiar to us, and this reinforces the idea that we’re going back to a painful place, a place incidentally that we’ve vowed that we were not going to with the promise that we would never do things ‘their way’ again. Yet here we are. The old feelings are back.

Depending on what our typical mode is and on Baggage Reclaim, we tend to opt for the, Let me please you in one million and one ways in an attempt to influence or even control your feelings and behaviour so that I can feel better about continuing with you mode, we hope that by accepting less than what we deserve that we’ll activate their conscience so that they feel guilty and yes even obliged, to reciprocate and pay back. We keep battling with our pleasing, erupting periodically, then back to pleasing and wondering when our nice and good deeds will finally be rewarded.

Here’s the extra big kicker about power struggles though:

We make the mistake of thinking that we are the ‘loser’ and that they are the ‘winner’ but in a power struggle, both parties lose.

It’s a relationship, not Armageddon. Unless two people are going to work together as team and accept each other in their humanness, which also means finding healthy compromises instead of trying to clobber each, not taking from each other to get what we want at the other party’s expense, and not treating each other as a means to an end (give me self-worth, meet my needs, do as I want or else), it’s a power struggle that guarantees pain and stunts vulnerability and growth.

Ironically, each person trying to ‘get’ what they want and feeling that if they don’t, that they’ll go ‘back there’ again, somewhere they were hurt, out of control, powerless, or under threat etc, results in each party being bagged up with negative associations.

If we do what they want, we become less attractive to us, no doubt berating us with our usual narrative, but we also become less attractive to them in some sort of twisted self-fulfilling prophecy. It’s like, Oh…. I see… you’re doing exactly what I’ve passive aggressively or aggressively clobbered you into. You’ve done what I wanted/demanded. Hmmm… yeah… I’ve lost respect for you… They mistakenly think that they can do things on their terms and that it’ll all be hunky dory and instead, they’re left with ambivalence and in the worst of cases, contempt, so they lose the relationship too. It’s a vicious cycle because they feel angry about us no longer being as attractive and grapple with unpleasant feelings that they’re pushing down and possibly projecting on to us (If only they’d [done as I wanted or lived up to the dream], I wouldn’t be feeling this way]..) but at the same time neglect to remember that part of why we’ve now become unattractive comes from their direct actions towards us. Ack!

And then, just to add another dimension to the mess, they (obviously only if capable of doing so), feel guilty for creating that situation and try to engage to relieve some of these feelings and at the same time, we try to use our pleasing ways to regain our composure and position, to make things right and get validated, which only creates more pain and frustration for us and induces guilt (in them), which brings up feelings of obligation, which reminds them about not going ‘back there’, which sets off the whole acting out and no doubt backtracking on any promises and professed intentions, and round and round we go. We also lose faith and build even bigger walls to protect us from the pain.

We feel unworthy and wonder why we can never ‘make’ people and situations that remind of us ‘back then’ go our way. We wonder what’s wrong with us; we wonder why we’ve been replaced; we worry that it’s always going to be this way and insist that we’re “not good enough”. We then use the experience to reconfirm our underlying beliefs and our self-fulfilling prophecy.

Our relationships cannot be built on inferiority and superiority. They can’t be about ‘getting’.

In a power struggle, who is really winning?

We have to decide if we want do battle or whether we want to enjoy being in a relationship. It can’t be about obliging or forcing each other into doing what we want.

Whoever we’re in a relationship with (or battling with), they don’t have the sole purpose of meeting our needs (or us theirs). They’re not going to fix or heal us and they’re not going to fill in the role of a parent/caregiver who didn’t meet our needs, and nor should we be tasking ourselves with doing this for him/her because we’re putting the kibosh on a mutually fulfilling, loving relationship. We have to decide if we want to do battle or whether we want to enjoy being in a relationship. They’re mutually exclusive. If we want to be open to compromise but they don’t, then we know that copiloting and growth isn’t possible. We know that they’re entrenched in getting their way and not open to sharing love. Instead of us continuing to do the same thing and expecting different results in a lose:lose situation, we learn to take care of ourselves and we exit the battle.

"How could this happen to someone like me?" Erm, because you're human!
One Shot - Keep it simple: If they reject you, it's time to bounce
Being Super-Busy: The Modern Lame Excuse For Managing Down Your Expectations